Should skin to skin care be standard of care for preemies right after delivery?

Skin to skin care (STS) or kangaroo care (KC) has quickly become one of the hot topics in neonatal care these days. The benefits have been spoken of before and as we learn more about the benefits it isn’t surprising to see studies emerge looking at novel groups who might benefit from the same. Dr. Kribs and her team in Cologne, Germany put themselves on the map with studies demonstrating the potential use of and benefits from LISA techniques for surfactant administration. The same unit is at it again but this time asking a different but very important series of questions.

Combatting the challenges the mother-infant dyad face after delivery

Traditionally, our smallest infants are resuscitated and shown to the parents before being taken to the NICU for ongoing care in an isolette. Dr. Kribs and her group wondered about the effect that separation could have on the mother-child interaction (MCI). The groups were comprised of infants born between 25 +0 – 32+ 0 weeks gestation. They postulated in a randomized controlled trial that after stabilization with or without surfactant that there would be a benefit to having these dyads spend 45 minutes in STS vs the traditional 5 minute visual contact with touching allowed of the face but not anywhere on the body since the infant was wrapped in protective thermal wrap. To test the difference in MCI at 6 months the authors shot a 4 minute video of the mother and child together and using blinded reviewers assessed the interaction between the dyad. The interaction involved the mother changing the diaper and playing with their children.

From the study; “Maternal and infant behavior was assessed using the Mannheim Rating System, a well validated standardized observation instrument(16). Videos were analyzed by two trained raters blind to randomization.”

Self reports of other important outcomes such as depression, bonding and more objective study of salivary cortisol were also performed. Salivary cortisol elevations were apparently blunted in another study at 4 months of age in infants who experienced more pain and stress in the NICU.

Like many studies looking at a brief intervention in the life of a child this one had some findings that are worth discussing. 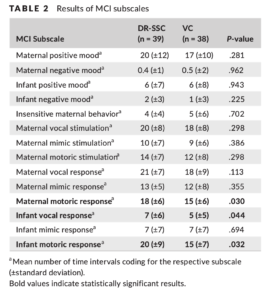 Maternal motoric response, infant vocal response and infant motoric response. What this meant specifically is that infant and maternal physical interactions were deemed positive in terms of facial expressions, physical movement or vocalizations more when delivery room STS was performed than when not. Infants were also more vocal with their mothers when they had experienced this intervention.

Also on the 3rd day of life maternal depressive symptoms were higher in the group randomized to only see their infant for 5 minutes. This was in spite of controlling for factors expected to confound the result. Salivary cortisol did not show a difference at 4 months. While the study was underpowered for the secondary outcomes there was no increase rate of IVH or other adverse outcomes in the study so take that for what its worth.

Lastly, there was less hypothermia in the group randomized to STS care on admission.

Some lessons from this study

As the authors note it is possible that parents prepped themselves for the videos but the number of parents that “put on a show” should roughly be equal between the groups. Not sure given the low number of patients in the study if that would have truly balanced out but the results to me seem plausible. Having a preterm infant for most families who really don’t know what to expect can be a terrifying experience. Such parents may develop the vulnerable child syndrome in which parents hover over their children feeling as if they need to be over protective given the perceived frailty of the child. This constant worry can lead to stress for the family and affect the parent-child interaction. What if you were able to hold your baby though almost from the start for 45 minutes against your chest and see that your infant wasn’t as fragile as you might have thought? Could this lead to a reduction in depressive symptoms by 3 days as found here? Might you spend a lot more time in kangaroo care as the journey of the patient continues in the NICU?

These were not all healthy babies as about 80% in both arms received the LISA procedure for administration of surfactant and then went on to CPAP. To most parents these babies would have indeed appeared fragile but perhaps showing the families that the babies were stronger than they looked and moreover allowing the families to not just be observers but provide direct care indeed had an impact on their mood and that carried over to childhood.

No doubt the naysayers out there will want a larger study that looks at other outcomes in terms of harm such as IVH and sepsis but this study certainly shows the strategy is possible and may just have enough benefit to make it standard of care some day.