Stop guessing when the NICU team is needed at a delivery 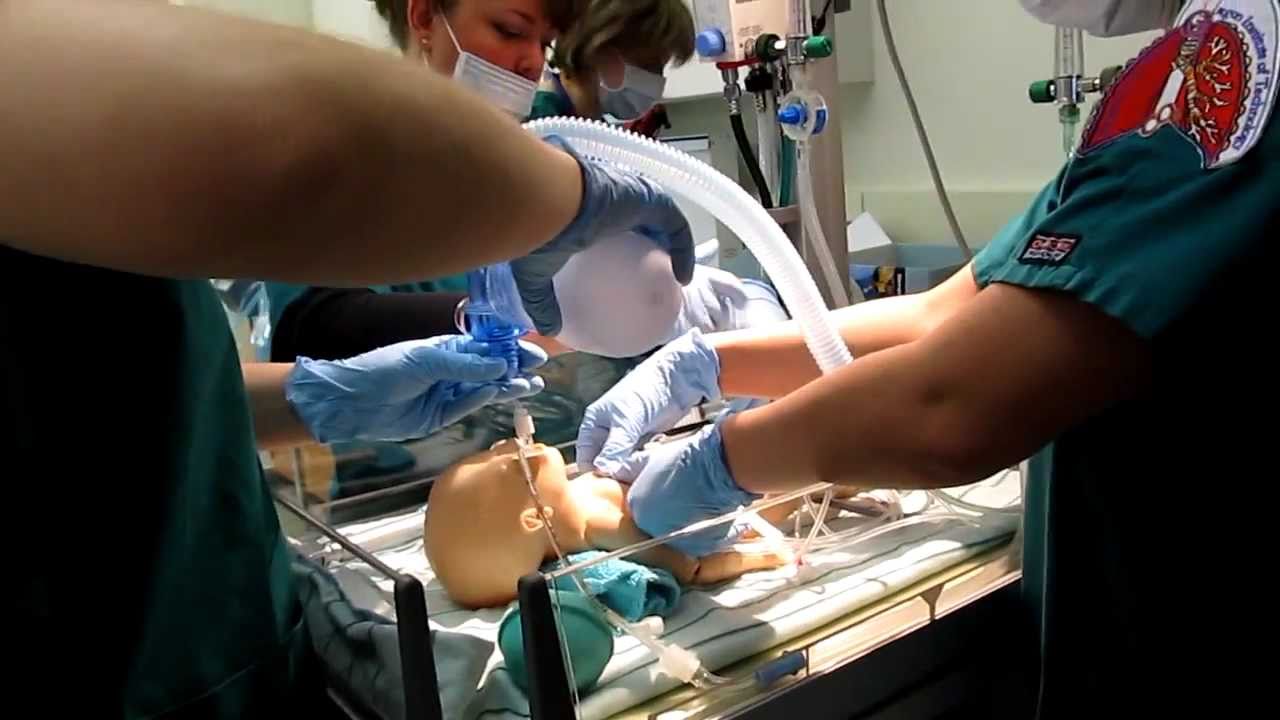 The other day I met with some colleagues from Obstetrics and other members from Neonatology to look at a new way of configuring our delivery suites.  The question on the table was which deliveries which were always the domain of the high risk labour floor could be safely done in a lower acuity area.  From a delivery standpoint they would have all the tools they need but issues might arise from a resuscitation point of view if more advanced resuscitation was needed.  Would you have enough space for a full team, would all the equipment you need be available and overall what is in the best interests of the baby and family?

We looked at a longstanding list of conditions both antenatal and intrapartum and one by one tried to decide whether all of these were high risk or if some were more moderate.  Could one predict based on a condition how much resuscitation they might need?  As we worked our way through the list there was much discussion but in the end we were left with expert opinion as there was really no data to go by.  For example, when the topic of IUGR infants came up we pooled our collective experience and all agreed that most of the time these babies seem to go quite well.  After a few shoulder shrugs we were left feeling good about our decision to allow them to deliver in the new area.  Now several days later I have some concern that our thinking was a little too simple.  You see, conditions such as IUGR may present as the only risk factor for an adverse outcome but what if they also present with meconium or the need for a instrument assisted delivery.  We would presume the risk for advanced resuscitation (meaning intubation or chest compressions and/or medication need) would be increased but is there a better way of predicting the extent of this risk?

An interesting approach to answer this question has been taken by an Argentinian group in their paper Risk factors for advanced resuscitation in term and near-term infants: a case–control study.  They chose to use a prospective case control study matching one case to 4 control infants who did not require resuscitation.  The inclusion criteria were fairly straightforward.  All babies had to be 34 weeks gestational age or greater and free of congenital malformations.  By performing the study in 16 centres they were able to amass 61953 deliveries and for each case they found (N=196) they found 784 deliveries that were matched by day of birth.  The idea here was that by matching consecutive patients who did not require resuscitation you were standardizing the teams that were present at delivery.

The antepartum and intrapartum risk factors that were then examined to determine strengths of association with need for resuscitation were obtained from the list of risks as per the NRP recommendations.

A Tool For All of Us?

What came out of their study was a simple yet effective tool that can help to predict the likelihood of a baby needing resuscitation when all factors are taken into account.   By resuscitation the authors defined this as intubation, chest compressions or medications.  This is pretty advanced resuscitation!  In essence this is a tool that could help us answer the questions above with far better estimation than a shoulder shrug and an “I think so” response.  The table can be found by clicking on this link to download but the table looks like this. 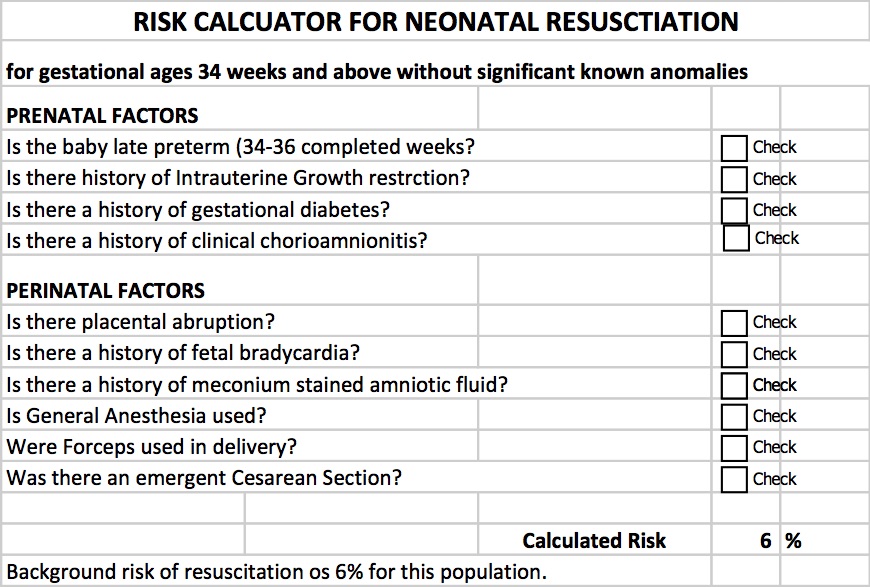 By inserting checks into the applicable boxes you get a calculated expected need for resuscitation.  Let’s look at the example that I outlined at the start of the discussion which was an IUGR infant. It turns out that IUGR itself increases the background risk for infants 34 weeks and above from 6% to 55% with that one factor alone.  Add in the presence of fetal bradycardia that is so often seen with each contraction in these babies and the risk increases to 97%!  Based on these numbers I would be hesitant to say that most of these kids should do well.  The majority in fact would seem to need some help to transition into this world.

Some words of caution

The definition here of resuscitation was intubation, chest compressions or medications.  I would like to presume that the practioners in these centres were using NRP so with respect to chest compressions and medication use I would think this should be comparable to a centre such as ours.  What I don’t know for sure is how quickly these centres move to intubate.  NRP has always been fairly clear that infants may be intubated at several time points during a resuscitation although recent changes to NRP have put more emphasis on the use of CPAP to establish FRC and avoid intubation.  Having said that this study took place from 2011 – 2013 so earlier than the push for CPAP began.  I have to wonder what the effect of having an earlier approach to intubating might have had on these results.  I can only speculate but perhaps it is irrelevant to some degree as even if in many cases these babies did not need intubation now they still would have likely needed CPAP.  The need for any respiratory support adds a respiratory therapist into the mix which in a crowded space with the additional equipment needed makes a small room even smaller.  Therefore while I may question the threshold to intubate I suspect these results are fairly applicable in at least picking out the likelihood of needing a Neonatal team in attendance.

Moreover I think we might have a quick tool on our hands for our Obstetrical colleagues to triage which deliveries they should really have us at.  A tool that estimates the risk may be better than a shoulder shrug even if it overestimates when the goal is to ensure safety.