Do you know what’s in your tube of glucose gel?

Hypoglycemia has been a frequent topic of posts over the last few years. Specifically, the use of dextrose gels to avoid admission for hypoglycemia and evidence that such a strategy in not associated with adverse outcomes in childhood. What we know is that dextrose gels work and for those centres that have embraced this strategy a reduction in IV treatment with dextrose has been noted as well.

Dextrose gels however in the trials were designed to test the hypothesis that use of 0.5 mL/kg of 40% dextrose gel would be an effective strategy for managing hypoglycemia. In the Sugar Babies trial the dextrose gel was custom made and in so doing an element of quality control was made possible.

In Canada we have had access to a couple products for use in the newborn; instaglucose and dex4. Both products are listed as being a 40% dextrose gel but since they are not made in house so to speak it leaves open the question of how consistent the product is. Researchers in British Columbia sought to examine how consistent the gels were in overall content and throughout the gel in the tube. The paper by A. Solimano et al is entitled Dextrose gels for neonatal transitional hypoglycemia: What are we giving our babies? As an aside, the lead author Alfonso was just announced as the 2019 recipient of the Canadian Pediatric Society Distinguished Neonatologist award so I couldn’t see a better time to provide some thoughts on this paper!

The study examined three tubes each of instaglucose and dex4. For each tube the researchers sampled dextrose gel from the top, middle and bottom and then the dextrose content per gram of gel determined as well as gel density. Glucose concentrations were analyzed high-pressure liquid chromatography tandem mass spectrometry (HPLC-MS/MS) and gas chromatography mass spectrometry (GCMS) were used to determine glucose concentrations and identify other carbohydrates, respectively. In terms of consistency the gels were found to be quite variable with dextrose content that for instaglucose could be as much as 81% and 43% different for dex4. Differences also existed between the different sections of the tubes so depending on the whether it was a fresh tube you were using or not the amount of dextrose could vary.
The authors also discovered that while dex4 contained almost exclusively dextrose, instaglucose contained other carbohydrates not listed on the manufacturer’s ingredient list. 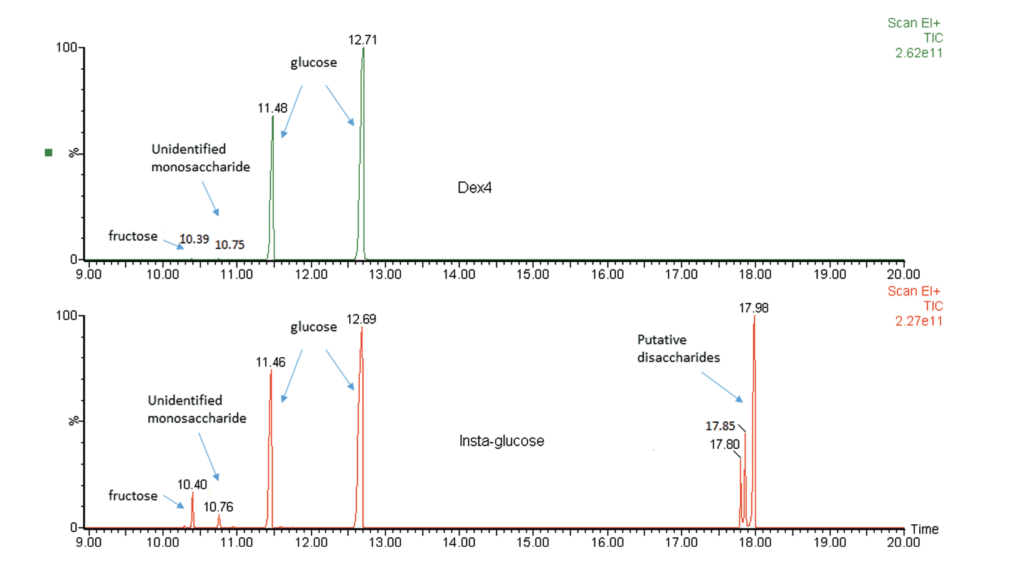 The differences are interesting for sure. If the glucose gels are not consistent though should we stop using them? I think the answer to that at least for me is no. Although the data is unpublished, our own centres experience has been that admissions for hypoglycemia have indeed fallen since the introduction of dextrose gel usage (we use instaglucose). What I can only surmise is that in some cases patients may be getting 40% but perhaps in others they are getting as little as 20% or as much as 60% (I don’t know exactly what the range would be but just using this as an example). In some cases of “gel failure” perhaps it is for some babies, receipt of low dextrose containing gel that is at fault or it may be they just have high glucose requirements that gel is not enough to overcome. Other infants who respond quickly to glucose gel may be getting a large dose of dextrose in comparison. Overall though, it still seems to be effective.
What I take from this study is certainly that there is variation in the commercially prepared product. Producing the gel in the hospital pharmacy might allow for better quality control and would seem to be something worth pursuing.