Reducing length of stay for preterm infants. Ask them, don’t tell them when to feed! 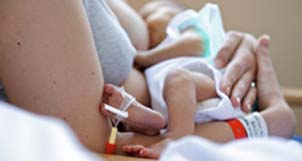 Will that be q2h, q3h or q4h feeding?  When I started my residency in Pediatrics that was the question I needed to ask before writing an order to start oral feeding in a preterm infant.  At the time it seemed perfectly reasonable but I have to admit the question for me was “What if they aren’t ready?”.  Does a baby who won’t take the breast or bottle at the 3 hour mark clearly show they aren’t able to feed or that they really are just not ready to feed?  We commonly say that children are not small adults.  Hospitalized adults commonly will utter the words “I’m not hungry” when their food tray is brought to them.  This may be a reflection of what has been put before them rather than whether hunger exists or not but they seem to be able to be ready to eat so why not children and by extension preterm infants in the NICU.

My approach to feeding premature infants was fairly consistent until about 10 years ago when nurses in Edmonton, Alberta (in a level II unit) introduced me to “semi-demand” feeding.  What I find interesting about this, is the paucity of evidence that existed on the subject.  At the time, the evidence really centred around one paper but the impact of the approach was undeniable.  In 2001 McCain et al published the randomized controlled trial involving 81 infants A feeding protocol for healthy preterm infants shortens time to oral feeding.  The concept of semi-demand feeding was to assess each infant (once preterms reached 32-34 weeks CGA) before a feed for signs “of feeding readiness”.  This was accomplished through offering non-nutritive sucking every three hours before a scheduled feed.  If the infant was found to be in a wakeful state, the oral feeding was commenced but otherwise the infant was left for 30 minutes with NNS attempted again.  If the infant was still not ready then a gavage would be given.  The key here is that the infants were monitored for signs of feeding readiness rather than insisting upon an arbitrary time for their next feed.  The study findings were a halving of the time it took to reach full feeds (10 days in control vs. 5 days in semi-demand) with no difference in weight gain observed between groups.  The latter point is worth emphasizing, as the concern with semi-demand has been from some that in a worst case scenario where feeds took place every 3.5 hours a baby would miss one feed compared to another infant on a q3h schedule.  This fear though does not bear out in the study.

The experience in the centre I currently work at has been so positive that it is hard to find a patient that is not fed in such a way whether a physician orders the approach or not!  What is truly fascinating to me is how effective the approach seemingly is and has been adopted again with very little evidence compared to that traditionally needed to change a practice in the neonatal world.  Interestingly, although we can’t say for sure we have noticed year over year declines in length of stay for infants born with a birthweight of 1500 – 2000g since the introduction of semi-demand feeding.  This could be a coincidence as this has not been the only practice change in our units but it certainly is interesting.

I was delighted to see a paper published this week on the topic by Wellington and Perlman.  This was a Quality Improvement project entitled Infant Driven Feeding in Premature Infants: A Quality Improvement Project.  This study compared three periods.  The first was one in which physicians set the feeding schedule (PDF), the second a training period for a new system and the last the infant driven period (IDP).  In the PDF phase, the physicians would order one oral feed a day, then two, three and so on when the full feed was attained at each prescribed level.  In the IDF period an assessment sheet for feeding readiness would be completed before each attempt and the decision to offer an oral feed based on the perceived ability to feed at that time. 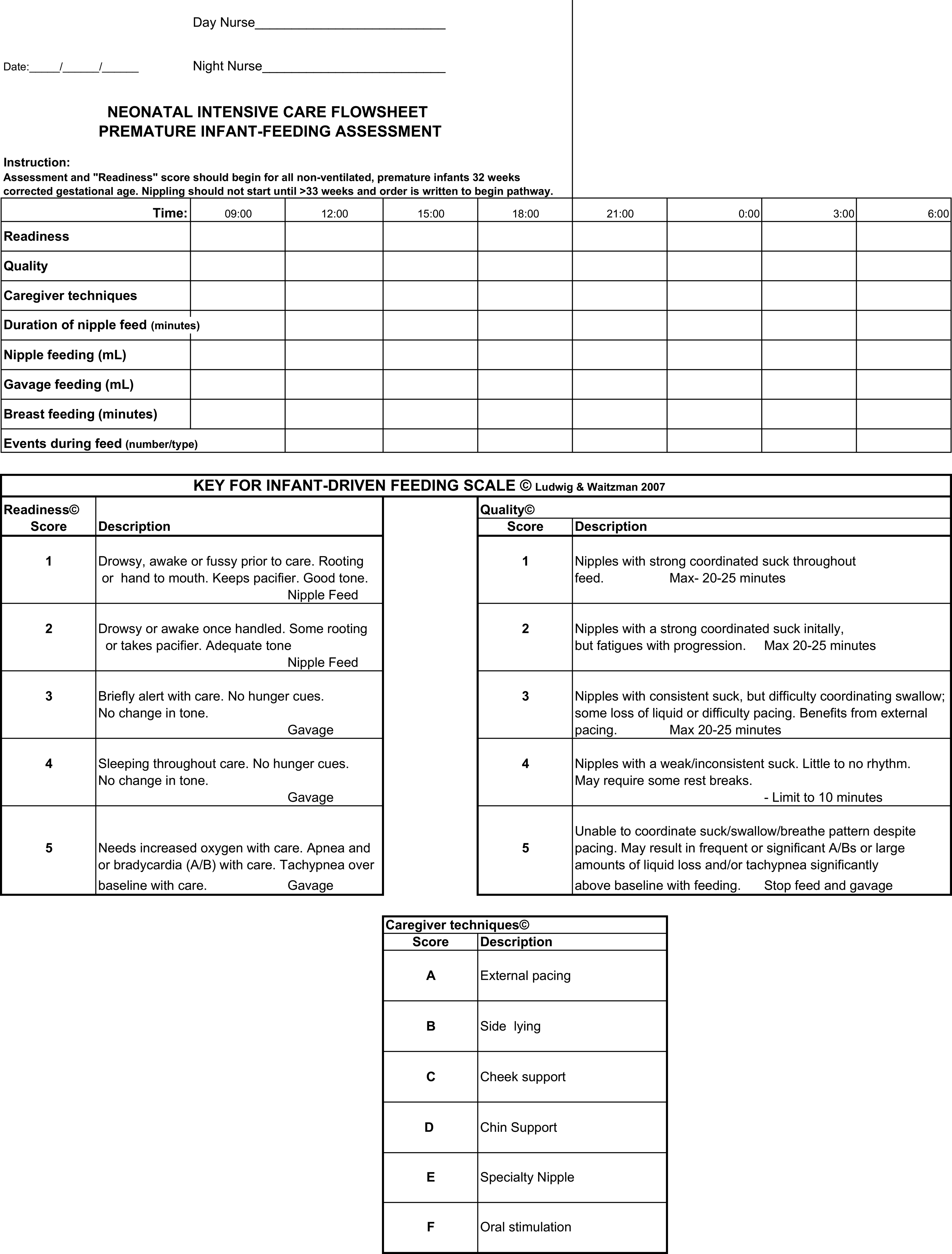 While this study was not an RCT it is a much larger group of patients than the study by McCain.  This comparison was between 153 PDF vs 101 IDF patients.  Feeding readiness assessments would start at 32 weeks CGA but feedings would not be offered by either approach until 33 weeks CGA similar to our own approach to feeding for the most part.  The use of IDF made no difference to timing of first attempt at nipple feeding.  The time to attain full nipple feeding was where significant differences in approach became apparent.

Although the findings are clear there does need to be the usual acknowledgement that this is not the gold standard RCT but the practice change in the unit was done pretty carefully.  The concept is one that makes a great deal of sense regardless.  The lack of difference in discharge for the smallest infants makes some sense as it may well be apnea of prematurity that is the last to resolve.  There is no disputing however the benefit in earlier discharge for the 28 – 31 6/7 week group.  They achieve feeding earlier and go home faster.  From a family centred approach this is the best of both worlds.  One should not write off the use of this technique in the smallest infants either as they will have their care normalized much earlier with the NG tube being removed and the parents getting to participate and practice feeding much earlier in their course. Although not measured in this study, it would be intriguing to look at the number of patients who were admitted to hospital post discharge with failure to thrive.

Imagine the impact as well on hospital length of stay data if you multiple the reductions in length of stay by the total number of patients seen in these gestational age categories each year.  This almost certainly can represent over a year of patient days for many hospitals.

As I see it the direction is clear.  We should not force our premature infants to follow a schedule that works for us.  Rather use the cues that only they can provide to tell us when and how much milk they desire.  Both the parents, infants and our hospitals will benefit.