One of the benefits of operating this site is that I often learn from the people reading these posts as they share their perspectives.  On a recent trip I was reunited with Boubou Halberg a Neonatologist from Sweden whom I hadn’t seen in many years.

I missed him on my last trip to Stockholm as I couldn’t make it to Karolinska  University but we managed to meet each other in the end.  As we caught up and he learned that I operated this site he passed along a paper of his that left an impact on me and I thought I would share with you.

When we think about treating an infant with a medicinal product, we often think about getting the right drug, right dose and right administration (IV, IM or oral) for maximum benefit to the patient.  When it comes to nutrition we have certainly come a long way and have come to rely on registered dietitians where I work to handle a lot of the planning when it comes to getting the right prescription for our patients.  We seem comfortable though making some assumptions when it comes to nutrition that we would never make with respect to their drug counterparts.  More on that later…

A Swedish Journey to Ponder

Westin R and colleagues (one of whom is my above acquaintance) published a seven year retrospective nutritional journey in 2017 from Stockholm entitled Improved nutrition for extremely preterm infants: A population based observational study.  After recognizing that over this seven year period they had made some significant changes to the way they approached nutrition, they chose to see what effect this had on growth of their infants from 22 0/7 to 26 6/7 weeks over this time by examining four epochs (2004-5, 2006-7, 2008-9 and 2010-11.  What were these changes?  They are summarized beautifully in the following figure. 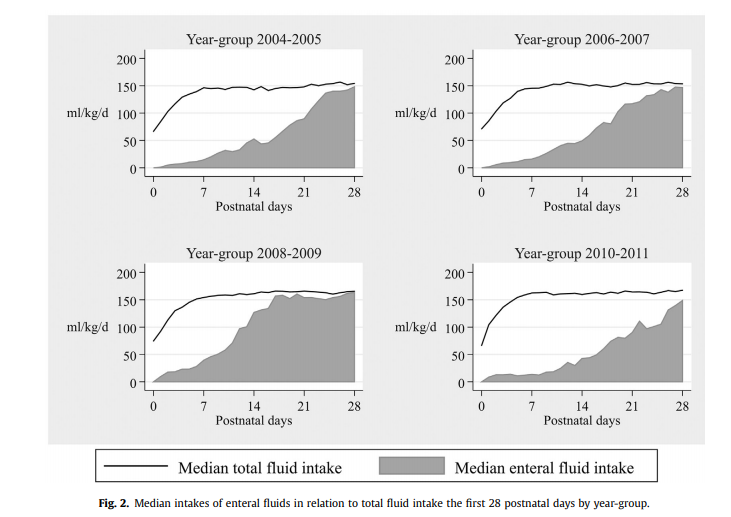 Not included in the figure was a progressive change as well to a more aggressive position of early nutrition in the first few days of life using higher protein, fat and calories as well as changes to the type of lipid provided being initially soy based and then changing to one primarily derived from olive oil.  Protein targets in the first days to weeks climbed from the low 2s to the mid 3s in gram/kg/d while provision of lipid as an example doubled from the first epoch to the last ending with a median lipid provision in the first three days of just over 2 g/kg/d.

While figure 3 from the paper demonstrates that regardless of time

period there were declines in growth across all three measurements compared to expected growth patterns, when one compares the first epoch in 2004-2005 with the last 2010-11 there were significant protective effects of the nutritional strategy in place.  The anticipated growth used as a standard was based on the Fenton growth curves.

What this tells us of course is that we have improved but still have work to do.  Some of the nutritional sources as well were donor breast milk and based on comments coming back from this years Pediatric Academic Society meeting we may need to improve how that is prepared as growth failure is being noted in babies who are receiving donated rather than fresh mother’s own milk.  I suspect there will be more on that as time goes by.

Knowing where you started is likely critical!

One advantage they have in Sweden is that they know what is actually in the breast milk they provide.  Since 1998 the babies represented in this paper have had their nutritional support directed by analyzing what is in the milk provided by an analyzer.  Knowing the caloric density and content of protein, carbohydrates and fats goes a long way to providing a nutritional prescription for individual infants.  This is very much personalized medicine and it would appear the Swedes are ahead of the curve when it comes to this.  in our units we have long assumed a caloric density of about 68 cal/100mL.  What if a mother is producing milk akin to “skim milk” while another is producing a “milkshake”.  This likely explains why some babies despite us being told they should be getting enough calories just seem to fail to thrive.  I can only speculate what the growth curves shown above would look like if we did the same study in units that actually take a best guess as to the nutritional content of the milk they provide.

This paper gives me hope that when it comes to nutrition we are indeed moving in the right direction as most units become more aggressive with time.  What we need to do though is think about nutrition no different than writing prescriptions for the drugs we use and use as much information as we can to get the dosing right for the individual patient!