What is Causing The Epidemic of Neonatal Abstinence?

I work in an NICU that is no different in at least one way than yours.  We have been seeing a growing volume of Neonatal Abstinence Syndrome (NAS) in our units for the last number of years.  In fact I recall one week on service last year where 10/24 patients in our unit or roughly 42% were suffering from this condition.  When I use the word suffering I should also mention that the staff experience this too.  These infants are resource intensive in that they cannot be left alone for too long and as part of their management demand or require frequent feeding to keep their scores down.

Increasing Incidence of the Neonatal Abstinence Syndrome in U.S. describes the gravity of the problem in Neonatal ICUs in the US over the period 2004 – 2013.

As the saying goes misery loves company and the following graph tells the story of NAS in North America very well.  There has been a dramatic rise in admissions with a progressive increase in length of stay.  Attempts to curtail use of these drugs in pregnancy by criminalizing the use of drugs for the unborn fetus has not gone well; Mandatory Drug-Testing in Pregnancy: Lesson Learned 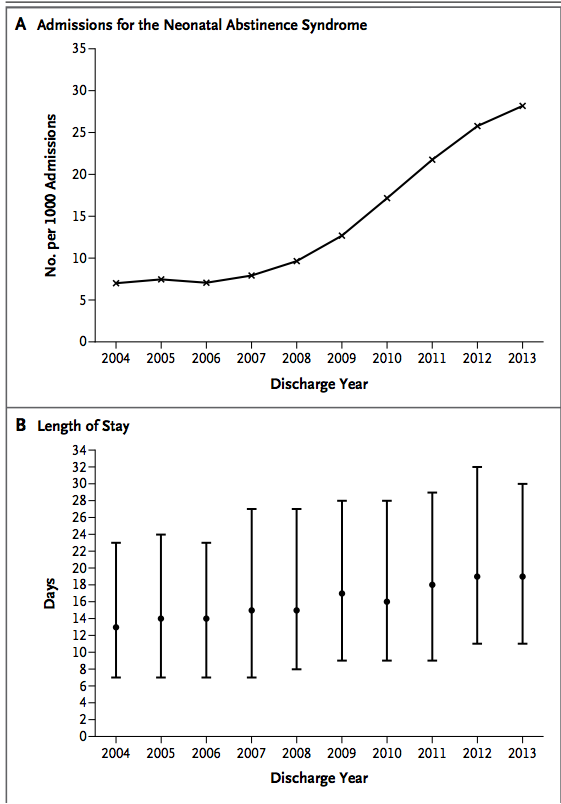 The use of opioid analgesic use in pregnancy has risen to an extremely high level and in large part is contributory in the US to such high rates of admission.  The answer may also lie in a change to the approach of treatment that occurred in the middle of this epoch and is shown in the next figure indicating what type of medication was utilized for treatment. In 2010 the Cochrane Database for Systematic Reviews published a comparison of the evidence supporting either opiates or phenobarbital for the primary treatment of NAS. 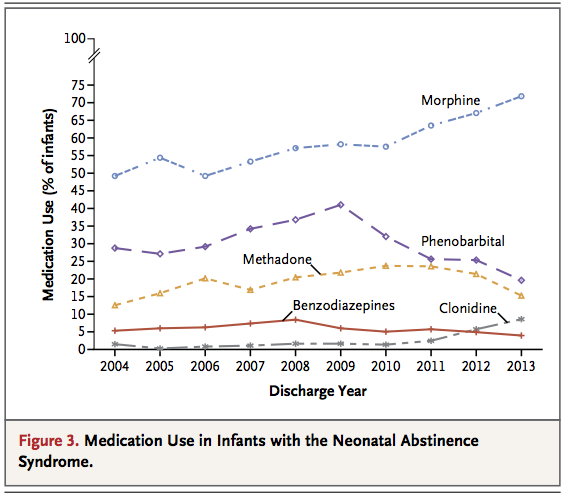 The conclusions of this paper changed the practice in our own and from the data presented here other centres as around 2009 – 2010, the use of phenobarbital decreased while morphine rose consistent with the recommendations from this group.  Morphine was selected as it appeared to reduce the incidence of seizures although I have to mention I have never seen a case myself, so I remain curious as to how common they really are.  In the review they also commented however that the use of opiates for treatment was associated with a prolongation of hospital stay.  The reasons for this are in part explained by practitioner reluctance to discharge an infant home on an opiate.  Doing so on low dose phenobarbital would have a much greater comfort level due to the common use for seizure control over the years in a home setting.  This may be reflected in the findings as well in this paper that the practice of discharging on medications for NAS control decreased during the period studied from 4% down to 1-2%.  Given the large number of babies being seen, this would represent a lot more infants in hospital and therefore a longer stay.

It is also tempting to blame the drugs that the mothers were exposed to but it would appear that there really is no basis for this based on this graph from the supplementary appendix The percentage of infants exposed to methadone remained the same, so higher use can not be blamed (which has been associated with higher rates of NAS).

Compounding the problem of NAS is that there are competing demands in many areas of the country where higher birth rates demand more NICU beds which are quite often occupied with NAS babies.  There is clearly work that is needed in the field to turn the tide and reduce NAS admissions and certainly length of stay.  As for how to do this there are a few ideas.

1.  Might Burprenophine rather than methadone be a better option for maternal treatment? There may be something there

2.  Treat the approach to NAS the same as that for headaches.  Get on top of it quickly!  Although not published, our own centre’s experience was that when we switched to predominantly using morphine we found that many of the infants required not only morphine but phenobarbital and often clonidine to control their symptoms and had the mean length of stay increase dramatically to 3-4 weeks per patient.  What we discovered thanks to a very dedicated nurse with a passion for NAS management was that we were not doing what we said we would.  Specifically, once the infant qualified for treatment we were not giving loads of 0.1 mg/kg of morphine q2h until controlled but rather in many instances waiting a little longer and then using 0.05 mg/kg as loads.  Since reinforcing that we need to get on top of the issue right away (like with a headache before it becomes entrenched) the use of morphine monotherapy has increased dramatically.

3.  Never admit these children in the first place.  We have an agreement with the postpartum ward that the initial monitoring for NAS can occur in the room with the parents.  The lack of separation encourages breastfeeding which in and of itself has led to some infants being successfully managed without ever coming to the NICU.  We still see infants coming but those that do have had 2 -5 days less time in the NICU decreasing the usage of NICU beds for this purpose with the added benefit of increasing maternal/infant bonding. Better yet there are models out there of mother-infant homes that these dyads can be discharged from hospital to.  Having them out of the hospital environment may be the best thing for them altogether and avoid treatment with medications at all.

4.  Consider discharging infants on morphine or other opiate.  There is no question that during the acute phase these children need to be in hospital as there are significant side effects from morphine not the least of which is respiratory depression.  Once a patient in weaning from the morphine and has successfully decreased the dosing or interval by 30 – 50% it is exceedingly unlikely that on the lower daily dosage they will start having symptoms.  In the presence of a reliable family with good supports that has been screened by a social worker such treatment can be completed outside the hospital.  Some may be worried about what could happen if the medication is taken by an older child or parent but as you know the amount of drug that would be sent home when dosed at 0.05 mg/kg or less for a few doses would not impact such larger individuals.

I am grateful to NEJM for publishing this article as it shows we are not alone.  Your suspicions that NAS is on the rise are accurate.  NAS is here and it’s not going anywhere.  The question is what are you going to do about it?!