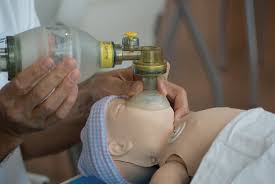 Let me start off by giving thanks to John Minski for this article and in fact for many others that have been reviewed on this blog. John is a registered respiratory therapist in Winnipeg with a passion for respiratory care like no other. John frequently sends articles my way to think about for our unit and this one was quite sensational to me. As readers of this blog I thought you might find it pretty interesting as well.

Why Would A Mask Cause Apnea

To begin with this seems counterintuitive as don’t we use masks when babies are apneic to help them breathe? While this is true and they are great for support, what if a baby is breathing already but has laboured respirations and you choose to apply a mask and provide PEEP to support their breathing efforts. Surprisingly there is evidence that this may induce apnea. The evidence comes from studies in term infants and one such study to demonstrate this finding was Effects of a face mask and pneumotachograph on breathing in sleeping infants by Dolfin T et al. While tidal volumes improved with facemask application, respiratory frequency after mask application dropped by 6 breaths a minute. This may have been offset by a rise in tidal volume as minute ventilation was unchanged. Regardless there was a slowing of the respiratory rate which was found in other studies as well.

The cause of this slowing has been attributed to the Trigemiocardiac Reflex (TCR). The trigeminal nerve branches all pass through the area around the mouth and nose as shown in this figure.

Applying the mask can cover these nerves and as they become compressed, This can trigger the TCR leading to apnea & reductions in HR and blood pressure (in the case of V1).

What About In Preterm Infants?

Preterm infants are a good group to study this phenomenon in as they as a group are more apt to need respiratory support after birth and have increased tendency towards apena and bradycardia compared to their term counterparts. That is what was done in a retrospective fashion by researchers from the Czech Republic who restarted research that largely occured in the early 1980s on the TCR so congratulations to them for digging this up and deciding to look at this in preterm infants.

Kypers KL et al published The effect of a face mask for respiratory support on breathing in preterm infants at birth in Resuscitation in late 2019. The study retrospecitively looked at the immediate delivery room outcomes for 429 infants (median (IQR) gestational age of 28+6 (27+1-30+4) weeks and divided them into those born who breathed but needed respiratory support with a mask and those who were apneic at birth.

As shown in the above table of the 368 babies who showed signs of breathing but had a facemask applied to provide either PEEP or anticipate the need for PPV about half stopped breathing after facemask application. In the figure below it is worth noting that the median time for this to happen was only 5 seconds and the duration of apnea was almost half a minute with 80% of these babies needing PPV to come out of it. Of those who continued breathing there were marked differences in timing of respiratory support and whether sustained inflations were employed. You were also more likely to intubate the infant if they had stopped breathing.

Lastly, there was an inverse correlation seen between gestational age and likelihood of apnea after facemask application of 1.424 (1.281 – 1.583 95% CI)

What are the implications here?

The TCR appears to happen in preterm infants when you apply a mask to support respiration more commonly than at term and the risk increases as GA decreases. This is not a good combination as it means that those that are at increasing risk of lung injury from positive pressure ventilation may be at higher risk of going apneic soley from placement of a mask over the mouth and nose. Yet this has been a staple of neonatal resuscitation for as long as I and I suspect almost anyone can remember.

What I think this really begs for is a follow-up study on the use of nasal prongs placed in the nares to provide CPAP right after delivery. This approach is what we in our centre strive to do anyway but there are many centres I suspect that still employ the mask and bag to provide CPAP either through a PEEP valve or manually compressing the exit flow end of the anaesthesia bag. If compression of the tissues around the mouth and nose could be averted, could the TCR be avoided as well with the use of prongs in this fashion. If a patient goes apneic after a mask is placed over the mouth and nose and then goes on to require PPV with provision of large tidal volumes to a 26 week infants lungs the damage is likely done and the die cast that this infant will develop enough lung injury to potentially be labelled as having BPD down the road.

I would like to thank the authors again for picking up on research that is over 35 years old and sparking new life into this area of Neonatology!