At 22 weeks of gestation does your faith matter most to outcome?

Recent statements by the American Academy of Pediatric’s, NICHD, the American College of Obstetricians and Gynecologists (ACOG), the Society for Maternal-Fetal Medicine (SMFM), and recommend selective approaches to mothers presenting between 22 0/7 to 22 6/7 weeks. The decision to provide antenatal steroids is only recommended if delivery is expected after 23 weeks. Furthermore the decision to resuscitate is based on an examination of a number of factors including a shared decision with the family. In practice this leads to those centres believing this is mostly futile generally not resuscitating or offering steroids while other more optimistic hospitals having higher rates of proactive (steroids and resuscitation) rates. Then there are other centres where the standard approach is proactive such as one in Uppsala, Sweden where this approach is used almost exclusively.

What would happen then if one compared the outcome for infants born at 22 weeks between this hospital and another where a selective approach is generally offered. In this case you would have a lot of experience with resuscitating infants at 22 weeks and the other a fraction of all presenting as a few to many would receive compassionate care. This is exactly what has now happened.

A Tale of Two Cities

The University Children’s Hospital, Uppsala, Sweden has been compared retrospectively to Nationwide Children’s Hospital, Columbus, Ohio, USA (NCH) with respect to survival and outcomes for their infants born at 22 weeks. The paper by Backes CH et al entitled Outcomes following a comprehensive versus a selective approach for infants born at 22 weeks of gestation tells a very interesting story about the power of belief or faith that one can accomplish something if they set their mind to it.

The authors examined a period from 2006-2015, dividing this time into two epochs with the first being 2006-2010 to account for differing practices and resources over time. Given that Uppsala took a proactive approach to all of their 40 live born infants during this time, it provided an opportunity to look at the 72 infants who were live born in the Ohio and examine their differences. In Ohio the approach was as follows; 16 (22%) received proactive care, 18 (25%) received inconsistent care (steroids but no resuscitation), and 38 (53%) received comfort care. In other words, although the total number of infants live born in Ohio was almost double that of Uppsala, only 16 were proactively treated in Ohio compared to all 40 in Uppsala.

The differences in outcome are striking 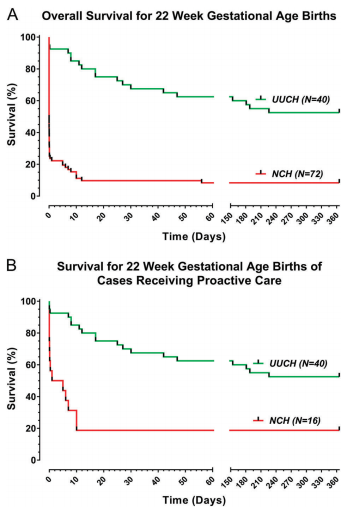 All surviving infants had BPD All infants surviving to initial hospital discharge were alive at 18 months’ postnatal age. 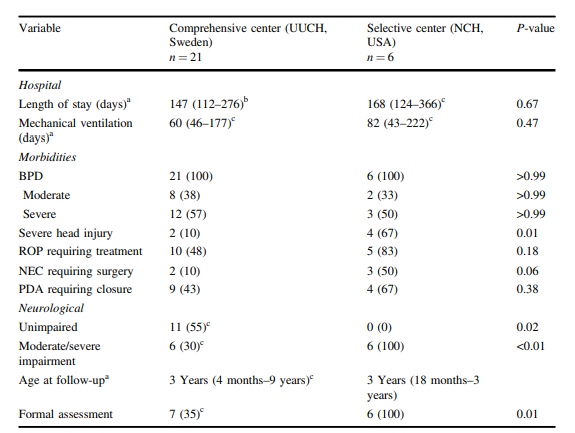 With respect to long term outcome the authors note:

A word about antenatal steroids as well. In Uppsala 85% of mothers received 2 doses of antenatal steroids vs 25% in Ohio. People sometimes question whether ANS at this age are effective. It is interesting to note that 44% of babies in the Ohio group vs 3% p<0.01 received chest compressions +/- epinephrine in the delivery room. Might this explain the better state of some of these infants at birth?

The Power of Belief

When I do rounds I often remark that try as we might we can’t will babies to do better. I also commonly say however that we need to be optimistic and although I am accused of seeing the world through rose coloured glasses I think there is an important lesson to be learned from this study. This comparison is really a contrast between a system that believes they can do a good thing for these families by actively promoting a proactive approach vs a system in which I imagine a reluctant approach exists even for those infants where a proactive plan is enacted. One sign of this might be that in Sweden 100% of these deliveries had a Neonatologist present vs 75% in the US. It could be due to other factors such as ability of the Neo to get in within time of the delivery however rather than a sign they didn’t feel they were needed due to futility.

There is evidence as well that the aggressiveness of the proactive approach also differs between the two sites based on a couple observations. The first is the rate of surfactant provision in the delivery room which was 100% in Sweden but only 56% in the US. The other thing of note is the time of death for those who did not survive. The median time of death in the US was 3 hours vs 17 days in Uppsala. What does this tell us about the approaches? I would imagine (although the numbers are small) that the teams in the US were much more likely to lose hope (or faith) and withdraw early while the other centre possibility motivated by their past successes pushed forward.

Remarkably, although one might think that the teams in Uppsala were simply creating significantly impaired survivors, 42% of the survivors were unimpaired from a developmental standpoint in follow-up. All surviving infants though from Ohio had moderate to severe impairment.

What this story may also really be about is practice. The reality is that the team in Sweden had over twice the exposure to such infants over time. Although the number presenting at this GA was higher, the ones that actually were resuscitated and given steroids was less than half. One cannot take away though that Uppsala in the end demonstrated that a proactive approach is definitely not futile. Not only can these children survive but almost half will be developmentally intact.

We must acknowledge as well though that since this is a retrospective study there may be factors that may have affected the results. As the saying goes “Individual results may vary”. Are the teams the same in both centres in terms of number of Neonatologists? Are there more residents caring for these infants vs fellows? Are the resources the same? What about proximity of the Neonatologist to the hospital? There are other factors such as cohesiveness of the team and communication between team members that may be influencing the results.

In the end though, this is a story of a team that believed it could and did. Perhaps seeing the world through rose coloured glasses is not such a bad thing in the end.