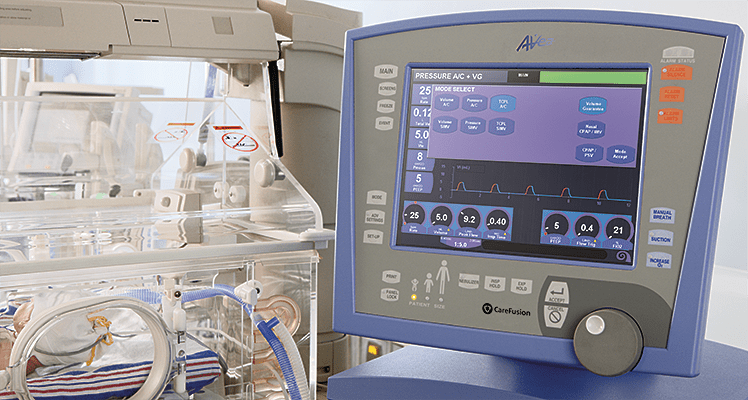 It has been over two years since I have written on this subject and it continues to be something that I get excited about whenever a publication comes my way on the topic.  The last time I looked at this topic it was after the publication of a randomized trial comparing in which one arm was provided automated FiO2 adjustments while on ventilatory support and the other by manual change.  Automated adjustments of FiO2. Ready for prime time? In this post I concluded that the technology was promising but like many new strategies needed to be proven in the real world. The study that the post was based on examined a 24 hour period and while the results were indeed impressive it left one wondering whether longer periods of use would demonstrate the same results.  Moreover, one also has to be wary of the Hawthorne Effect whereby the results during a study may be improved simply by being part of a study.

So the same group decided to look at this again but in this case did a before and after comparison.  The study looked at a group of preterm infants under 30 weeks gestational age born from May – August 2015 and compared them to August to January 2016.  The change in practice with the implementation of the CLiO2 system with the Avea ventilator occurred in August which allowed two groups to be looked at over a relatively short period of time with staff that would have seen little change before and after.  The study in question is by Van Zanten HA The effect of implementing an automated oxygen control on oxygen saturation in preterm infants. For the study the target range of FiO2 for both time periods was 90 – 95% and the primary outcome was the percentage of time spent in this range.  Secondary outcomes included time with FiO2 at > 95% (Hyperoxemia) and < 90, <85 and < 80% (hypoxemia). Data were collected when infants received respiratory support by the AVEA and onlyincluded for analysis when supplemental oxygen was given, until the infants reached a GA of 32 weeks

As you might expect since a computer was controlling the FiO2 using a feedback loop from the saturation monitor it would be a little more accurate and immediate in manipulating FiO2 than a bedside nurse who has many other tasks to manage during the care of an infant.  As such the median saturation was right in the middle of the range at 93% when automated and 94% when manual control was used. Not much difference there but as was seen in the shorter 24 hour study, the distribution around the median was tighter with automation.  Specifically with respect to ranges, hyperoxemia and hypoxemia the following was noted (first number is manual and second comparison automated in each case). 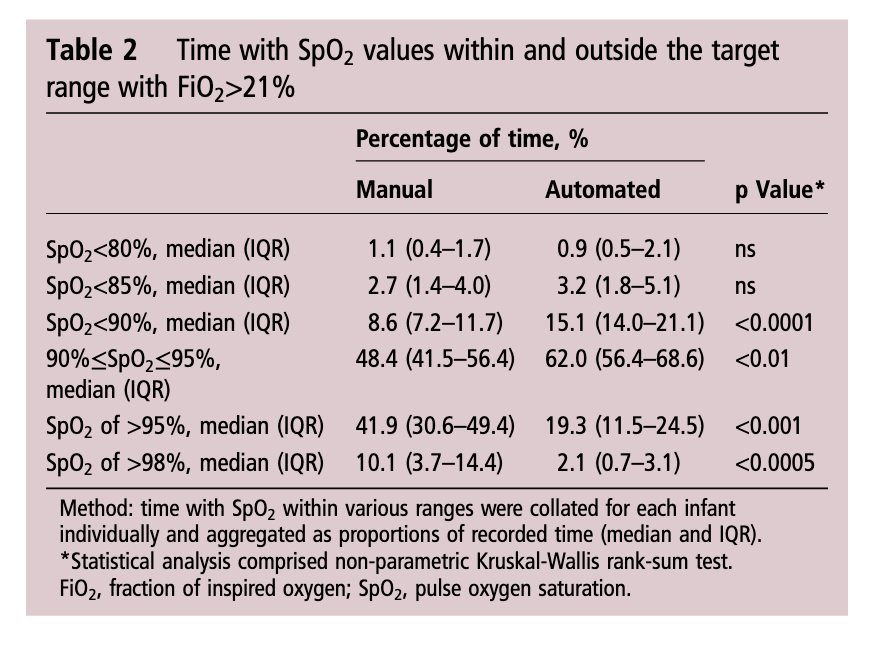 I find it quite interesting that while hyperoxemia is reduced, the incidence of saturations under 90% is increased with automation.  I suspect the answer to this lies in the algorithmic control of the FiO2. With manual control the person at the bedside may turn up a patient (and leave them there a little while) who in particular has quite labile saturations which might explain the tendency towards higher oxygen saturations.  This would have the effect of shifting the curve upwards and likely explains in part why the oxygen saturation median is slightly higher with manual control.  With the algorithm in the CLiO2 there is likely a tendency to respond more gradually to changes in oxygen saturation so as not to overshoot and hyperoxygenate the patient.  For a patient with labile oxygen saturations this would have a similar effect on the bottom end of the range such that patients might be expected to drift a little lower then the target of 90% as the automation corrects for the downward trend.  This is supported by the fact that when you look at what is causing the increase in percentage of time below 90% it really is the category of 85-89%.

Is this safe? There will no doubt be people reading this that see the last line and immediately have flashbacks to the SUPPORT trial which created a great deal of stress in the scientific community when the patients in the 85-89% arm of the trial experienced higher than expected mortality.  It remains unclear what the cause of this increased mortality was and in truth in our own unit we accept 88 – 92% as an acceptable range.  I have no doubt there are units that in an attempt to lessen the rate of ROP may allow saturations to drop as low as 85% so I continue to think this strategy of using automation is a viable one.

For now the issue is one of a ventilator that is capable of doing this.  If not for the ventilated patient at least for patients on CPAP.  In our centre we don’t use the Avea model so that system is out.  With the system we use for ventilation there is also no option.  We are anxiously awaiting the availability of an automated system for our CPAP device.  I hope to be able to share our own experience positively when that comes to the market.  From my standpoint there is enough to do at the bedside.  Having a reliable system to control the FiO2 and minimize oxidative stress is something that may make a real difference for the babies we care for and is something I am eager to see.