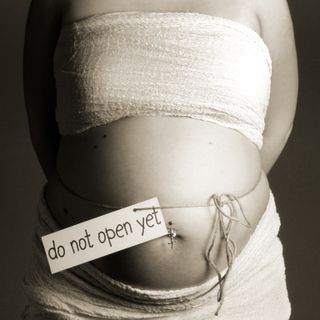 Not just for preemies anymore? Antenatal steroids for elective c-sections at term.

While it is clear that  corticosteroid administration prior to 37 weeks has great benefit, the question is whether these benefits might actually extend to 37 and 38 weeks.  It has been known for some time that having an elective c-section before 39 weeks exposes the infant to an increased risk of pulmonary morbidity and NICU admission. In 2009 Tita At et al studied 24077 repeat elective c-sections at term finding that 36% were performed prior to 39 weeks.  The findings conclusively demonstrated that delivery at 37 and 38 weeks increased the likelihood of a composite outcome of death or respiratory complications, treated hypoglycemia, newborn sepsis and admission to the NICU. 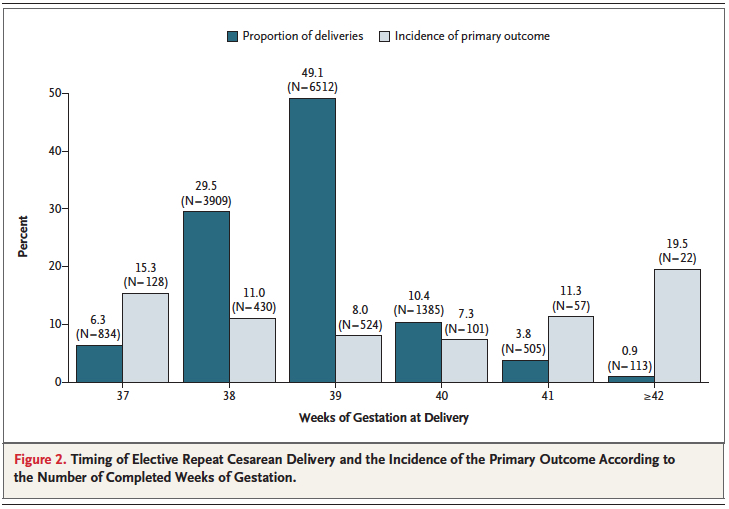 Interestingly one can also see that after 40 weeks these complications rose again.  Post term deliveries are not without their consequences either.

Broken down by outcome, it is also clear that each component has an increased risk at both 37 and 38 weeks compared to delivery at 39 or 40 weeks. 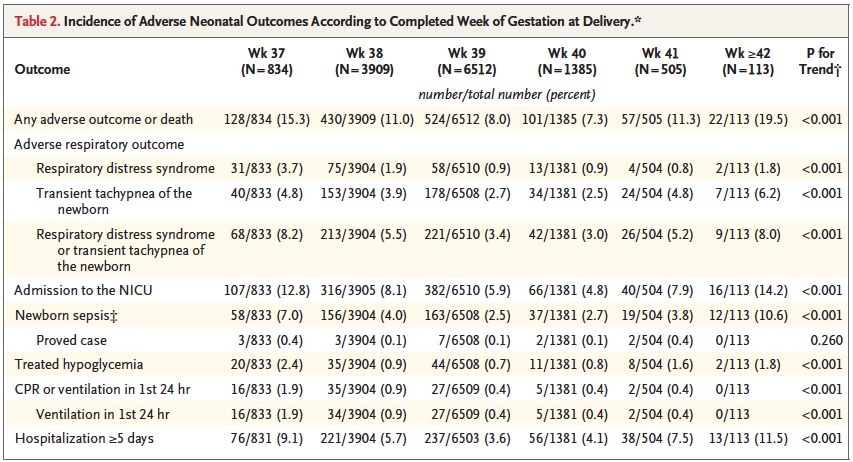 With such increased risk this practice has been discouraged by many obstetrical organizations including the American College of Obstetricians and Gynecologists.

Knowing that there is clear benefit to providing corticosteroids before 37 weeks, it was only a matter of time before someone would test the hypothesis that treatment of women having an elective c-section in would reduce the incidence of respiratory complications such as TTN and RDS.  Surprisingly there is really only one relevant study on this subject performed by P. Stutchfield et al in 2005 entitled Antenatal Betamethasone and Incidence of Neonatal Respiratory Distress After Elective Caesarean Section: A Pragmatic Trial.  The trial provided betamethasone as a single course of two doses 24 hours apart starting 48 hours before a planned c-section with 998 participants in total. 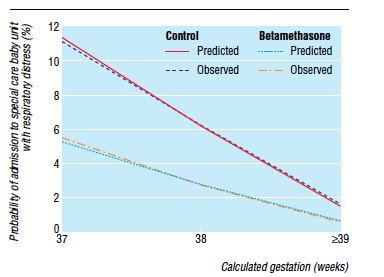 The primary outcome in this trial was admission to NICU with respiratory distress.  While the study was unblinded, the results were impressive and shown in the figure to the right indicating that below 39 weeks there was a significant difference in likelihood of admission for respiratory distress if women were treated with betamethasone prior to elective delivery via c-section.  In terms of effectiveness this translates to the need to treat 37 women at 37-38 weeks with betamethasone to prevent one admission for respiratory distress to NICU.  Eighty percent of the newborns in the control group had TTN versus RDS so I would expect you would need to treat about 200 women to prevent one case of RDS at this gestational age.  Is it worth it?  I suspect if you told parents that you could prevent hospital admission of their newborn at all many would choose to do so.  There is another side to this though that one must consider and that side is the impact on neurodevelopment.

Corticosteroids work by overcoming the maternal capacity to break down cortisol by a placental enzyme 11β-hydroxysteroid dehydrogenase type 2 (11β-HDS-2).  Furthermore the corticosteroids used (betamethasone and dexamethasone) are resistant to degradation by this enzyme.  In the brain this enzyme exists as well and has increased activity such that levels of active cortisol in the brain are at a minimum.  In animal models, high levels of glucocorticoids cause decreased brain differentiation with reduced neurogenesis.  These processes are likely to be similar in humans given the presence of the same enzyme which has little effect in inactivating these synthetic medications.

Even with this knowledge, we as health care providers freely recommend antenatal steroids to women at risk of preterm birth for all the benefits outlined at the start of this post.  Preterm infants are at significant risk of IVH, PVL, NEC, PDA and many other conditions which in and of themselves have been linked with adverse neurodevelopment.  It is the avoidance of these outcomes which likely explains why corticosteroid administration with it’s known effect on the developing brain leads to improved neurodevelopmental outcome.  The challenge here is that can we extrapolate this to the 38 and 39 week fetus?  I would suggest that this is not the case as the risks of the conditions leading to neurodevelopmental impairment are magnitudes less.  We are then exposing these fetuses to the potential harm or glucocorticoids without the benefit of reducing the conditions that matter to outcome.  On the other side of the scale is a reduction in TTN/RDS and admission to the NICU but is it worth treating 37 mothers to avoid this with the heavy weight on the other side?

If you believe I am making some unfair assumptions it is worth seeing what happened to the patients in the 2005 study by Stuchfield when they were followed up between 8 – 15 years of age.  The study used a questionnaire to address a number of outcomes related to education, atopy and behaviour.  The response rate for the study was only 51% of the original cohort so any conclusions must be taken with a grain of salt.  That being said the authors state that there were no differences in outcome or difference in rates of asthma and atopy.  In their conclusion they affirm that based on the lack of differences in long-term outcomes but with improved short-term respiratory status at birth steroids should be provided before elective c-sections.  Curiously though the authors do not address an interesting finding shown in table 2 from the article.

Looking at the bottom section pertaining to the school’s assessment of a child’s academic ability, less children in the steroid group performed at the top quarter of the class and twice as many children were in the lower quarter of the class.  To me at least it seems disingenuous to claim no differences were seen when clearly here is a difference based on a third-party (the teacher) that is significant.  The academic purists will be quick to point out that this is a secondary analysis and not the primary outcome specifically of the study and that the numbers are small.  Additionally one can also argue that at a 51% response rate we are missing a great deal of outcomes.  Furthermore it may well be that when it comes to surveys, those who have concerns about their participation in the study may be more apt to complete it skewing the results.

I will allow all these arguments as it really helps to support my conclusion on all of this.  There is very little data out there on the benefit of providing antenatal steroids at term before elective c-section.  The data out there for long-term effects does show a concern regarding school performance and the exposure in this case is to medication which is known to have effects on the developing brain.  That data though is suspect as well given the issues raised in the above paragraphGiven the number of women that need to be treated to avoid one admission for respiratory distress and with the above mentioned concerns I believe more studies are needed to determine whether this is worth instituting as standard practice.  Finally, any future studies will need to address in a prospective manner using a large number of patients whether there is indeed any impact on development in the long-term from such practice.