Could a digital stethoscope revolutionize resuscitation of the newborn?

Look around you.  Technology is increasingly becoming pervasive in our everyday lives both at home and at work.  The promise of technology in the home is to make our lives easier.  Automating tasks such as when the lights turn on or what music plays while you eat dinner (all scripted) are offered by several competitors.  In the workplace, technology offers hopes of reducing medical error and thereby enhancing safety and accuracy of patient care.  The electronic health record while being a nuisance to some does offer protection against incorrect order writing since the algorithms embedded in the software warn you any time you stray.  What follows is a bit of a story if you will of an emerging technology that has caught my eye and starts like many tales as a creative idea for one purpose that may actually have benefits in other situations.

In 2012 students in Australia rose to the challenge and designed a digital stethoscope that could be paired with a smartphone.  The stethoscope was able to send the audio it was receiving to the smartphone for analysis and provide an interpretation.  The goal here was to help diagnose childhood pneumonia with a stethoscope that would be affordable to the masses, even “Dr. Mom” as the following video documents.  Imagine before calling your health line in your city having this $20 tool in your hands that had already told you your child had breath sounds compatible with pneumonia.  Might help with moving you up the triage queue in your local emergency department.

Shifting the goal to helping with newborns

Of course breath sounds are not the only audio captured in a stethoscope.  Heart sounds are captured as well and the speed of the beats could offer another method of confirming the heart is actually beating.  Now we have ECG, pulse oximetry, auscultation and palpation of the umbilical stump to utilize as well so why do you need another tool?  It comes down to accuracy.  When our own heart rates are running high, how confident are we in what we feel at the stump (is that our own pulse we are feeling?).  In a review on measurement of HR by Phillipos E et al from Edmonton, Alberta, auscultation was found to take an average of 17 seconds to produce a number and in 1/3 of situations was incorrect.  The error in many cases would have led to changes in management during resuscitation.  Palpation of the umbilical cord is far worse.  In one study “cord pulsations were impalpable at the time of assessment in 5 (19%) infants, and clinical assessment underestimated the ECG HR with a mean (SD) difference between auscultation and palpation and ECG HR of − 14 (21) and − 21 (21) beats min –1″.  In another study, 55% of the time providers were incorrect when they thought the HR was under 100 BPM.  This leaves the door open for something else.  Might that something be the digital stethoscope?

How does the digital stethoscope fare? 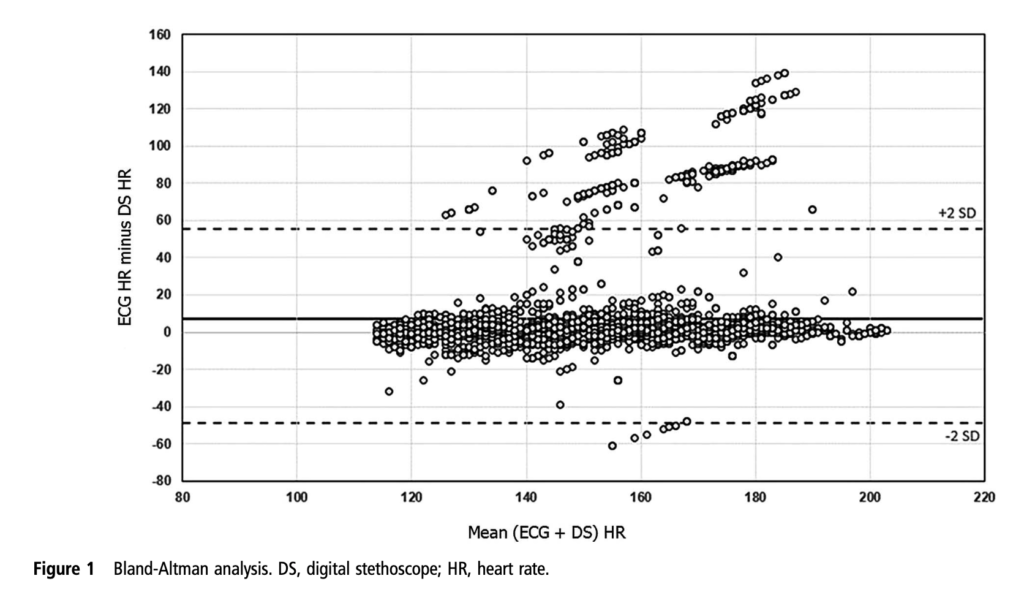 decided to look at the use of the Stethocloud to measure HR after birth in infants >26 weeks gestational age at birth. The opted to use the ECG leads as the gold standard which arguably is the most accurate method we have for detecting HR.   The good news was that the time to signal acquisition was pretty impressive.  The median time to first heart rate with the stethoscope was 2 secs (IQR 1-7 seconds).  In comparison the time for a pulse oximeter to pick up HR is variable but may be as long as one minute.  In low perfusion states it may be even longer or unable to pick up a good signal.  The bad news was the accuracy as shown in the Bland Altman plot.  The tendency of the stethoscope was to underestimate the EKG HR by about 7 BPM. Two standard deviations though had it underestimate by almost 60 BPM or overestimate by about 50 BPM.  For the purposes of resuscitation, this range is far to great.  The mean is acceptable but the precision around that mean is to wide.  The other issue noted was the frequent missing data from loss of contact with the patient.  Could you imagine for example having a baby who has a heart rate of 50 by the stethoscope but by EKG 100? Big difference in approach, especially if you didn’t have EKG leads on to confirm.  The authors note that the accuracy is not sufficient and felt that an improvement in the software algorithms might help.

Another go at it

So as suggested, the same group after having a new version with improved software decided to go at it again.  This time Gaertner VD et al restricted the study to term infants. Forty four infants went through the same process again with the stethoscope output being compared to EKG lead results.  This time around the results are far more impressive.

There was virtually no difference between the ECG and the stethoscope with a 95% confidence interval as shown in the graphs with A being for all recordings and B being those without crying (which would interfere with the acquiring of HR).  A maximal difference of +/- 18 BPM for all infants is better than what one gets with auscultation or palpation in terms of accuracy and let’s not forget the 2 second acquisition time!

Should you buy one?

I think this story is evolving and it wouldn’t surprise me if we do see something like this in our future.  It certainly removes the element of human error from measuring.  It is faster to get a signal than even the time it takes to get your leads on.  Where I think it may have a role though is for the patient who has truly no pulse. In such a case you can have an EKG HR but the patient could be in pulseless electrical activity.  Typically in this case people struggle to feel a pulse with the accuracy being poor in such situations.  Using a device that relies on an actual heart contraction to make a sound provides the team with real information.  Concurrent with this technology is also the rise of point of care ultrasound which could look at actual cardiac contractions but this requires training that makes it less generalizable.  Putting a stethoscope on a chest is something we all learn to do regardless of our training background.

I think they could be on to something here but perhaps a little more evidence and in particular a study in the preterm infant would be helpful to demonstrate similar accuracy.