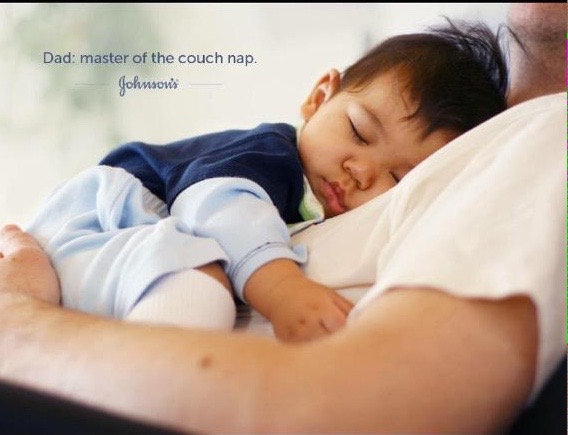 An under recognized killer. The sofa!

This post is a re-release due to a furor on twitter over the last month of the release of a Johnson’s Baby (July 17) showing the infant sleeping with dad on a couch.
Johnson and Johnson has since spoken out about the ad and clearly stated it was not their intention to show unsafe sleeping practices but as a company working in the field of newborn care I do believe there is a responsibility to demonstrate safe sleeping practices and as you will see when you read on the couch is not one of them…

The back to sleep campaign achieved incredible results in reducing the risk of SIDS.  Since its inception the program reduced the rate of SIDS by approximately 50% although annually in the US there remain approximately 4000 deaths per year.  SIDS is clearly a parent’s worst nightmare and it is important to disseminate any information that we can to try and further reduce SIDS in addition to the Safe to Sleep campaigns achievements.

Much of what I am writing, I would really encourage readers to incorporate into discharge planning whether you are working in an NICU or postpartum ward.  The advice is based on well done research and although not part of a randomized trial which is our gold standard, it has been found across many studies.  These risks are now accepted as modifiable factors and as part of our responsibility to advocate for our patients this is one thing we can and should talk about.

These have been identified as  risk factor for SIDS both prenatally and in the homes of newly born infants.  As it has been associated, it is not always clear whether smoking and drug use in and of themselves cause biochemical or developmental changes in the developing fetus that predisposes them to SIDS or if it a marker for something else such as socioeconomic status.  That being said there are many reasons to deter people from these factors so I would see this as a strong area for advocacy.

This has been appreciated as a risk factor for SIDS for many years although I suspect many parents are unaware of its risk.  I can understand how it can happen and why some mother’s who are wanting to encourage breastfeeding favour it. Having your infant with you such that the moment they wake you can turn to them and feed them is simple and avoids having to go back and forth from rooms particularly when you have a “snacker” on your hands and you are exhausted from the endless night time feeding.  This has and will likely continue to be cited as a risk though for SIDS and should be discouraged.  What remains a little unclear is whether co-sleeping by itself is actually a risk in the absence of other factors as outlined in the above paragraph.  A meta-analysis of multiple studies by Carpenter indicated that co-sleeping with or without the above factors placed infants at risk of SIDS although the risk was increased further when such factors were present.

Curiously Blair PS et al found exactly the opposite result that in the absence of risk factors of smoking, alcohol or drug use the practice of co-sleeping appeared to add no additional risk for SIDS.

So the jury is perhaps out as to whether co-sleeping in the absence of other risk factors increases the risk of SIDS given the conflicting studies but in the presence of uncertainty I would at least caution that the practice should be avoided if there is the potential for actual risk.

What has been consistent however is that the use of the sofa as a sleeping surface is one that should be avoided.  Avoidance should include even naps with your infant as it doesn’t take very long for an adverse outcome to be realized.  In previous studies in fact the risk has been estimated to be 67 times that of sleeping in a bed.  A recent well done study of 9073 sleep related deaths found that 1024 occurred while co-sleeping on sofas.  This study documented all deaths from 2004-2012 and demonstrated a 12.1% incidence of death in this environment.  As a probable explanation for the increased risk found with this position, more infants were likely to have been placed prone or side lying while sleeping on the sofa with a parent.  Suffocation in this position particularly if wedged in between the parent and the cushion would be far more likely.  The complete study can be found here. For risks while sleeping on sofas see the accompanying table. 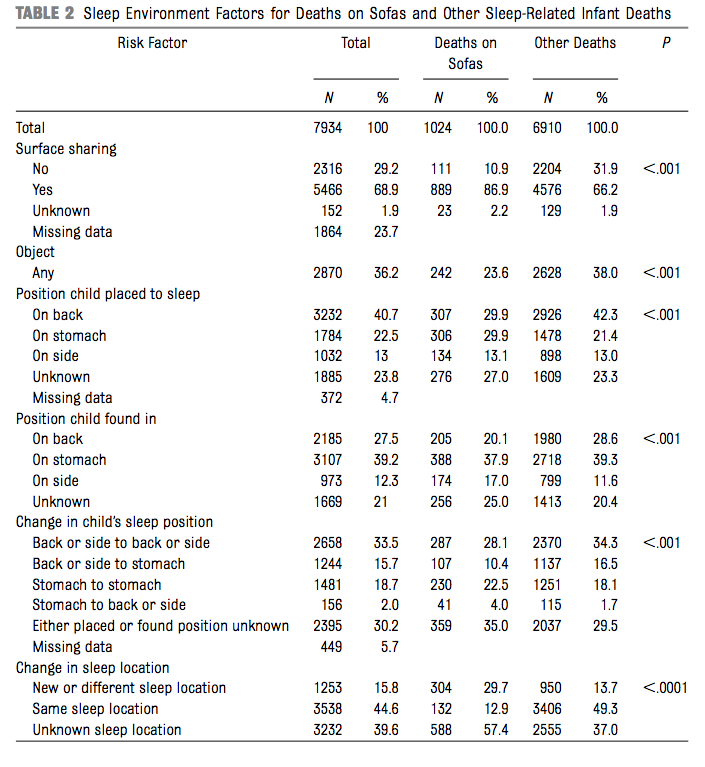 In the end as health care providers anticipatory guidance needs to be part of all of our practices.  We all talk about “Back to Sleep” but do all programs caution about the risks of napping or sleeping with your infants on a sofa?  We have a chance to make a real difference and eliminate over a 1000 deaths a year that are attributable to this position.  I know it is easy to take a quick nap with a child on the sofa but is the risk worth it?  That is something every parent needs to decide for themselves but the first thing is getting the information into their hands so they can make an informed decision!