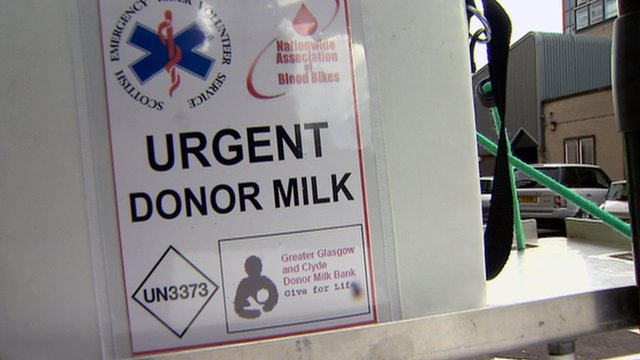 Shouldn't the newborns of same-sex male partners be entitled to breast milk too?

There is the potential for a very significant issue to arise in the NICU environment in the coming years.  As I was preparing the last blog piece following the decision by SCOTUS to allow same-sex marriage in all 50 states I began to think about the so-called ripple effect.  In other words, now that the law has been changed, what impacts could this have that might have been unforeseen.  The first thought that crept into my mind was that as male same-sex parents they would read the same literature that promotes breast milk feeding in the NICU and no doubt want the best for their infant in the NICU or for that matter any baby.  In many NICUs however there are weight or gestational age restrictions indicating who will receive donor breast milk if the mother is not able or not willing to produce her own.  In our unit for example we given DBM to all babies currently under 1250g and those recovering from NEC or other bowel surgery.  Might men in a same-sex marriage who have adopted a child or used a surrogate who is not willing to breastfeed demand the same?

In looking into this I came across a very strange story from 2013 in which a nurse in the UK offered to “rent her breasts” to gay parents. The story at the time caused a fairly big stir as it raised a number of questions as to safety and the morality of it all.  In some ways it was ahead of its time as there have been a number of articles recently addressing the very issue of safety of milk (will be addressed further in the article obtained outside of HMBANA approved breast milk banks.

As same-sex couples increase and many then choose to have children of their own to raise what demands will be made of access to breast milk?  There is no question “breast is best” and I have either written or posted to Facebook many articles suggesting decreased incidence of allergy, necrotizing enterocolitis, improvements in the microbiome and many other benefits as well.  What do we do in the situation of the same-sex family who declares that they want to provide breast milk to their infant in hospital as it is the best source of nutrition for their infant.  If we say for example that their 2 kg, 34 week infant is too big to qualify for DBM is this fair given that they have no option for producing their own milk in the setting of male same-sex partners?  Could we as health care providers be labelled as discriminating?

One option is to allow such parents to bring in their own milk but then where do they source it from?  Milk purchased online or from the community may be contaminated with bacteria, viruses or contain some cow’s milk as some recent publications have demonstrated. Can we knowingly allow families to bring such milk into the hospital to feed their infant?  Perhaps, but only if we have medical legal safeguards in place that protect the hospital from knowingly allowing patients to bring in milk which could be contaminated.  Waivers of liability would need to be in place in each hospital permitting such sourcing of milk.  If however we strongly discourage such practice will we direct them to the milk bank supplying our local hospital.  Herein lies the challenge though.  If availability of volume was not an issue, we could provide to all infants in the unit but the reality is there is simply not enough to go around.  Furthermore, the larger the infant, the more donor milk they utilize and the more depleted the supply becomes for those of our smallest infants who are most in need of avoiding formula.  Finally, who should pay for this milk if the family cannot produce any as in this situation.  This is not a case of a mother who could produce but chooses not to but rather a family who is desperate to use what they have read is best but physically is incapable of producing.  The same of course could be said for those women who try and cannot or due to prior surgery are unable to produce milk.  I believe this is an issue that will come up across the US and Canada and I will be interested to see how it plays out and what role Bioethics may play in helping to resolve some of these questions.

This will be a slippery slope.  If male same-sex parents are provided with free access to donor milk I don’t see how donor milk will not be made available to all families who cannot provide their own.  Why would the male parents who biologically be unable to provide milk be given this “liquid gold” while other mothers who are pumping round the clock, taking domperidone and seeing a lactation consultant and getting only drops be denied as their newborn is 1600g and above the weight cutoff.  I hope you can see the issue of equity popping up in this discussion.

Finally why not allow those parents who are male same-sex partners to simply pay for the milk they need if they don’t qualify for “free” milk under a unit’s program?  Sadly the issue then becomes one of equity again.  Do we want to care for infants in an environment where the wealthy who can afford to pay for the donor milk from an HMBANA milk bank get it and the poor are only offered formula?  I have to admit I realize there are health care systems where this is the case but in Canada where we have a socialized medical system this kind of two tiered system would cause many to become nauseated.

I fear that this issue will come up as the number of people marrying and choosing to have children in same-sex relationships increases.  If it leads to a 100% human milk diet for infants in the NICU I would say that is a good thing but I think the road like Winnipeg will be paved with many potholes that we will have to do our best to navigate around.