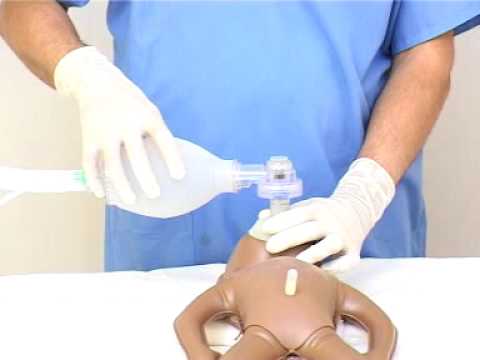 Building A Better Mask For PPV

Ask almost anyone who has worked in the field of Neonatology for some time and they will tell you that babies are not as sick as they once were. We can give a lot of credit to better antenatal steroid use, maternal nutrition and general management during pregnancy.  Additionally, after birth we now rush to place infants on CPAP and achieve adequate expansion of the lungs which in many cases staves off intubation.

The downside to our success though is that the opportunities to provide positive pressure ventilation (PPV) and moreover intubation are becoming less and less.  How then do we perform when we are asked to do such procedures on an infrequent basis?  The answer as you might expect is not that well.  Dr. Schmolzer et al studied the ability of people to keep a good seal and found a 29% leak on average with as high as 63% in one patient.  As this was a study in which people were being observed one might think the Hawthorne Effect might artificially decrease the percentage leak compared to real world scenarios when you know you aren’t being watched.

What is the cause of the leak?

Leaks most commonly occur on either side of the nasolabial folds.  Although at least in my experience we educate trainees about this issue it remains a problem.  I would also speculate that at the times when we need to be at our best during an advanced resuscitation involving chest compressions we may well function at our worst.  This is the effect of the adrenalin rushing through our system as our sympathetic system turns into overdrive.  The question therefore is one of getting around human error in particular when we need to minimize such inefficiency the most.

If the masks are prone to leaking and with it the ability to properly ventilate compromised, how could we minimize such human error.  The answer may lie in what I consider to be an ingenious way to apply a mask. The concept and it is just that at the moment is to use suction to apply the mask to the face without risk of leak. 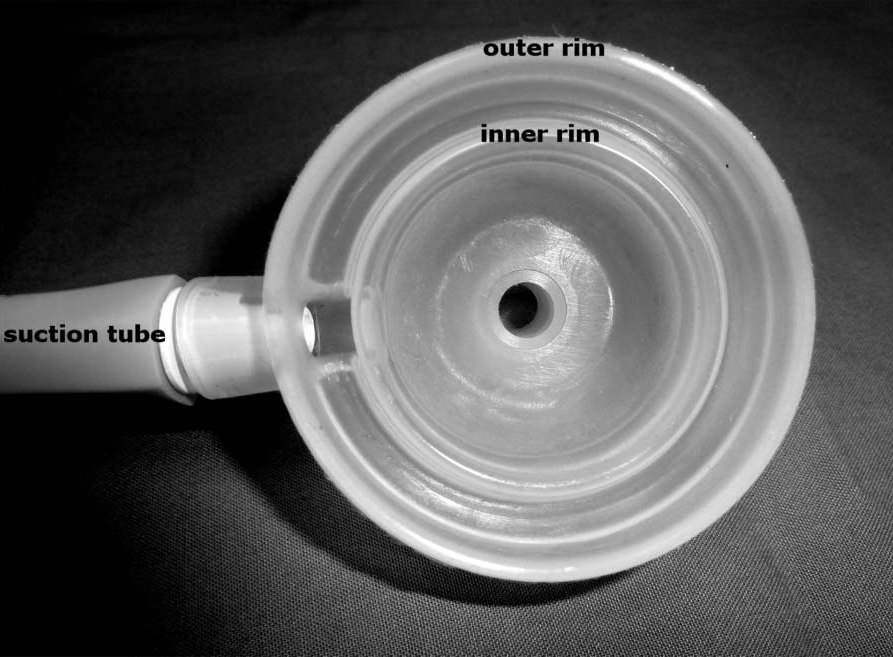 Lorenz L et al have just published a proof of concept study utilizing a mannequin with a “seal skin” layer applied to the face to simulate human skin.  The article is entitled A new suction mask to reduce leak during neonatal resuscitation: a manikin study.

In this study, the mask was applied to the face of the mannequin and 100 cm H2O pressure was applied through a side port on the mask.  There is an inner and outer ring such that the internal 41 mm diameter mask is surrounded by a double wall in which the suction is applied to the space between the two walls leading to the mask seating itself firmly against the face.  The authors then studied the amount of leak found when using a Neopuff set to deliver 40 – 60 breaths per minute at pressures of 25/5.  For this study 60 courses were tested.

How did it do compared to PPV through a traditional mask?

As you might expect (since you can feel my excitement!) it did very well. The average leaks using a conventional approach were quite good at 12.1% but the suction mask was only 0.7% leak.  Importantly the ranges were quite different.   PPV through a conventional mask had a range of 0.6 – 39% leak while with the suction version it was 0.2 – 4.6%.  These results were statistically different.

As mentioned this study is what one would consider a proof of concept study.  We do not know how this would fare in the real world and that of course is the next step.  In terms of harm, the authors did note that when applied to the forearm of an adult it caused some mild redness from the suction that vanished quickly on breaking of the seal but we do not know if there could be greater harm in a newborn in particular one who is quite small.  Such testing will be needed as part of any further study.

Having said that I think this rethink of the mask for PPV could be transformative to those who perform neonatal resuscitation infrequently.  If this mask is found not only to be effective in a clinical trial but safe as well I would suggest a change to this type of mask could quite literally be life saving.  Placed in the hands of those who are inexperienced in keeping a seal, PPV would become much more effective and in particular for rural sites the infants being transported in much more stable than some are at present.

Keep your eyes peeled for future work using this mask.  Something tells me if it proves to be efficacious outside of a seal skin covered mannequin, your toolkit for providing NRP may be in for a change.