Hospital or Home Based Therapy For Neonatal Abstinence? 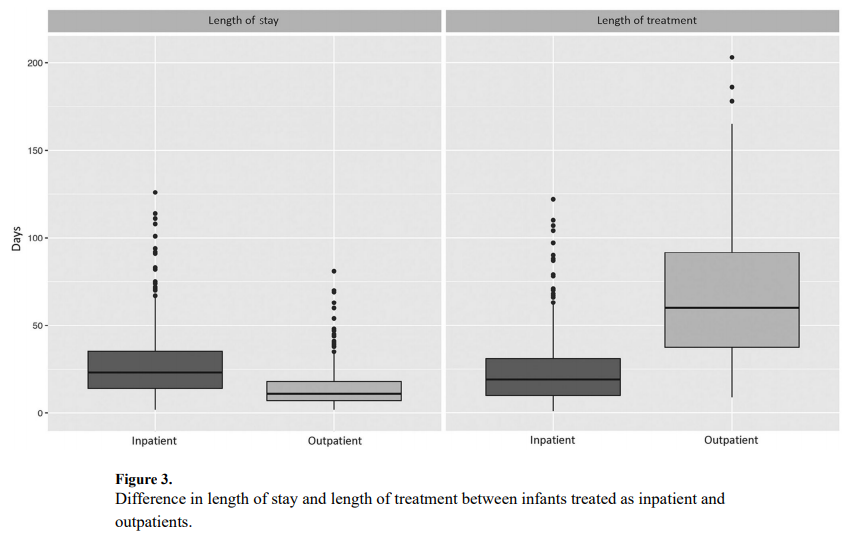 This post is very timely as the CPS Fetus and Newborn committee has just released a new practice point:

Managing infants born to mothers who have used opioids during pregnancy

Have a look at discharge considerations as that section in the statement speaks to this topic as well!

As bed pressures mount seemingly everywhere and “patient flow” becomes the catch-word of the day, wouldn’t it be nice to manage NAS patients in their homes?  In many centres, such patients if hospitalized can take up to 3 weeks on average to discharge home off medications.  Although done sporadically in our own centre, the question remains is one approach better than the another?  Nothing is ever simple though and no doubt there are many factors to consider depending on where you live and what resources are available to you.  Do you have outpatient follow-up at your disposal with practitioners well versed in the symptoms of NAS and moreover know what to do about them?  Is there comfort in the first place with sending babies home on an opioid or phenobarbital with potential side effects of sedation and poor feeding?  Nonetheless, the temptation to shift therapy from an inpatient to outpatient approach is very tempting.

Maalouf Fl et al have published an interesting account of the experience with outpatient therapy in their paper Outpatient Pharmacotherapy for Neonatal Abstinence Syndrome.  The authors were able to take advantage of the Tennessee Medicaid program using administrative
and vital records data from 2009 to 2011 to capture a cohort of 736 patients who were treated for NAS.  Forty five percent or 242 patients were treated as outpatients vs 290 cared for in hospital for the duration of treatment.  It is worth mentioning at this point that when the authors say they were cared for as outpatients it really is a hybrid model as the duration of hospitalization for the inpatients was a median of 23 days (IQR 14-35) versus 11 days (IQR 7-18) for inpatients (P < .001).  This practice isn’t much different than my own in which I start therapy in hospital and then discharge home with a period of home therapy.

The strength of the study is the volume of patients and the ability to follow-up with these babies for the first 6 months of life to determine what happened to them after discharge.  In terms of duration of treatment, the differences are significant but perhaps not surprising. The median length of treatment for outpatients was 60 days (IQR 38-92) compared with 19 days (IQR 10-31) for inpatients (P < .001).  What was interesting as well is that 82% of babies were discharged home on phenobarbital and 9.1% on methadone and 7.4% with both.  A very small minority was discharged home on something else such as morphine or clonidine.  That there was a tripling of medication wean is not surprising as once the patients are out of the watchful eye of the medical team in hospital it is likely that practitioners would use a very slow wean out of hospital to minimize the risk of withdrawal.

This study found a statistically significant increase in risk for presenting to the emergency department for those patients treated as outpatients. 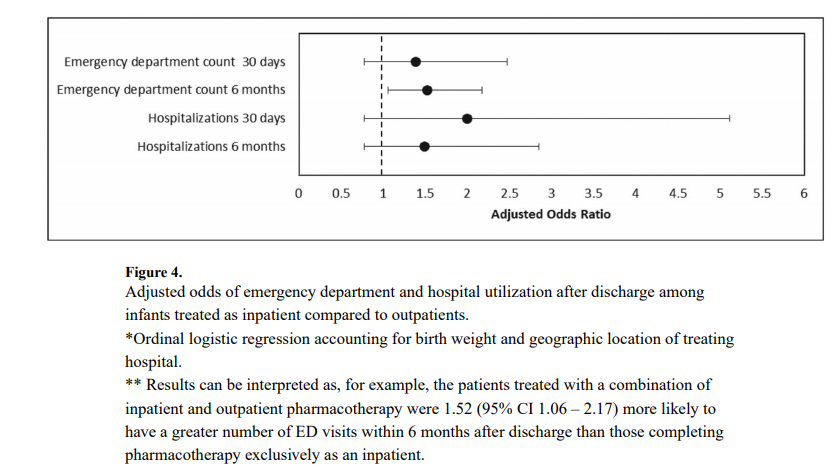 What this graph demonstrates is that there was no increase risk in the first month but there was for the first 6 months.  Despite the increased risk of presentation to the ED the rate of hospitalization was not different.  Drilling down the data further, the reason for coming to the ED was not for withdrawal which was 10% in the outpatient and 11% in the inpatient group.  The other major reason was The most common diagnoses were upper respiratory infections; 80% outpatient vs 71% inpatient.  So while there was a significant difference (which was not by much) my take on it is that it was most likely by chance as I can’t think of how infections in the first 6 months could be linked to choice of medication wean.

Phenobarbital has been used for many years in Neonatology for control of seizures, sedation (taking advantage of a side effect) and management of NAS.  The problem with a median use of phenobarbital for 2 months is its potential to affect development.

An animal study by Diaz in 1999 in which rat pups were given two weeks of phenobarbital starting on day 5 of life and then euthanized demonstrated the following weight reductions when high dose phenobarbital was utilized.  In human data, children with febrile seizures treated with phenobarbital in the paper Late cognitive effects of early treatment with phenobarbital. had decreased intelligence than those not exposed to phenobarbital.

The issue here for me is not necessarily whether babies can be treated successfully as outpatients for NAS.  The concern is at what cost if the choice of drug is phenobarbital.  The reason phenobarbital was chosen is likely due to compliance.  We know that the more frequently a drug is dose the less likely compliance will be achieved.  Phenobarbital being dosed either q12h or q24h is an ideal drug from a compliance point of view but the ramifications of this treatment deserve reconsideration.

I look forward to seeing further studies on this topic and hope that we see the results of an opioid outpatient treatment program.  I know these exist and would welcome any information you as the readers of this blog can offer.  Treating patients in the home makes great sense to me but we need to do it with the right drugs!