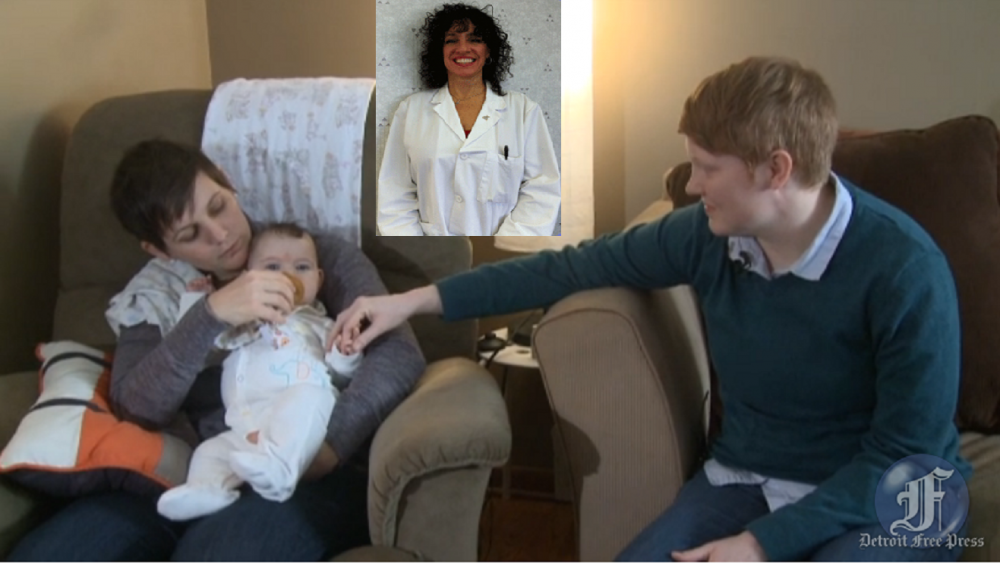 I'm sorry I can't take care of your baby because you are Lesbians.

I know, this sounds like a ridiculous title to a post but it actually happened in Detroit recently.  Krista and Jamie Contreras loving parents of 6 day old Bay were denied care by a Pediatrician solely due to the parents being Lesbians.  Please watch this short video before reading on.

I can’t help but think that the recent laws that have been passed in Indiana and Arkansas open the door for similar situations in those states.  Moreover, imagine the impact if the laws spread to other conservative states in the US.  If you look at some history though, the Religious Freedom Restoration Act (RFRA) was first passed in 1993.  The act was brought into being after an American Indian man was fired from his job for failing a company drug test.  The drug in this case was peyote which culturally was acceptable for him to use but not in keeping with company policy.  The law that was brought into existence was therefore designed to protect people from the Government and industry interfering with religious practices which in this case they were as peyote was used as part of his religious practice.

That sounds like a very positive step in the right direction so why have Indiana and Arkansas come under so much heat over this current legislation?  The reason is that the law makes it possible for not only the individual but a company or business to sidestep the law if their religious beliefs are found to be in conflict with a person or request.  Don’t believe this could happen?  It already did.  The US Supreme Court recently ruled that the Hobby Lobby company could refuse to provide birth control to employees as a health benefit. Using birth control violates the company’s Christian religious beliefs.

The physician in this case lacked a solid RFRA in Michigan so she could do nothing more than apologize for her stance.  What concerns me greatly though is the hypothetical situation in which a member of the Lesbian Gay Bisexual Transgender (LGBT) community decides to have a child with a member of the same sex in a state with an RFRA.  What if for instance Michigan had such a law?  Would this Pediatrician have apologized or simply stood behind the government?  I am not sure what would have happened and in a state like Michigan which in my view is a little more progressive than some of the states in the “Bible Belt” I suspect this family would have found another Pediatrician to take care of them.  If this story had taken place in Arkansas, how difficult would it have been to find another Pediatrician on short notice while the infant was still hospitalized?  Might be a little harder.

On the first day of Medical School all students are asked to take the Hippocratic Oath. The Oath is not the same as was first spoken by Hippocrates but rather in one form or another is based on the version that came from the Declaration of Geneva and reads as follows:

At the time of being admitted as a member of the medical profession:

Point number 4 states “The health of my patient will be my first consideration”.  Furthermore point #8 specifically spells out that sexual orientation should not matter.

In essence the newborn baby is in need of treatment and you are obligated to provide such treatment without consideration of whether the parents are members of the LGBT community.

Quite frankly I am embarrassed for this physician.  Do not misunderstand my intention here though.  Whether I support the LGBT community or not is irrelevant to this discussion.  What is relevant is that a member of the medical community who swore an oath to put the patient first has violated that oath.  It is my hope that these words will reach the eyes or ears of physicians who may have had similar thoughts and remind them of the oath that they once swore to uphold.  The United States is at a tipping point (quoting Malcolm Gladwell again) where physicians or medical corporations may opt to refuse treatment for infants who happen to be born to LGBT parents.  The infant was born into this world and needs someone to care for them from a medical standpoint.  Whether their parents choose to be intimate with members of the same sex should never enter the equation and I hope that this is the last report I hear of this behaviour by a member of the medical community.  Sadly as I often say hope is not a good plan and I fear that this indeed will not be the last instance we hear of.

The President of the United States no doubt wishes to leave a legacy as he prepares to leave office.  Obamacare, a nuclear deal with Iran and a two state solution for Israel and the Palestinians will be great accomplishments if they last.  Sadly if he doesn’t weigh in and do something soon the ability of companies, organizations and governments to discriminate against member of the LGBT community will leave a black mark on the Presidency that will be remembered long after the Republicans undo much of what he feels will be his “accomplishments”.

Please Mr. President. Do something.