Is paralysis for intubation really needed?

A few weeks back I wrote about the topic of intubations and whether premedication is really needed (Still performing awake intubations in newborns? Maybe this will change your mind.) I was clear in my belief that it is and offered reasons why. There is another group of practitioners though that generally agree that premedication is beneficial but have a different question. Many believe that analgesia or sedation is needed but question the need for paralysis. The usual argument is that if the intubation doesn’t go well and the patient can’t spontaneously ventilate could we be worse off if the patient loses their muscle tone.

At the CPS meeting last month in Quebec City. I had the pleasure of listening to a talk by Dr. Elizabeth Foglia on the findings from a Neonatal intubation registry that many centres have been contributing to. The National Emergency Airway Registry for Neonates (NEAR4NEOs), records all intubations from a number of centres using an online database and allows for analysis of many different aspects of intubations in neonates.

This year, J. Krick et al published Premedication with paralysis improves intubation success and decreases adverse events in very low birth weight infants: a prospective cohort study. This study compared results from the registry of two centres, the University of Washington Medical Center (UWMC) and Seattle Children’s Hospital where the former rarely uses paralysis and the latter in almost all instances of non-emergent intubation. In all, 237 encounters were analyzed in the NICU for babies < 1500g with the majority of encounters (181) being from UWMC. The median PMA at intubation was 28 completed weeks (IQR: 27, 30), chronological age was 9 days (IQR: 2, 26) and weight was 953 g (IQR: 742,1200). The babies were compared based on the following groups. Premedication with a paralytic 21%, without a paralytic 46% and no premedication 31%.

How did the groups compare?

It turns out paralysis seems to be a big deal (at least in this group of infants). Use of paralysis resulted in less attempts to intubate (median 1 attempt; IQR: 1, 2.25 vs. 2; IQR: 1, 3, p < 0.05)). In fact success was no different between the groups with no paralysis or no premedication at all! When it comes to  tracheal intubation adverse events the impact of using paralysis becomes more evident. 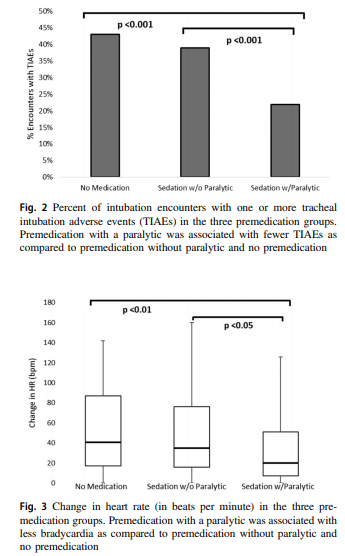 Paralysis does make a difference in reducing the incidence of such events and moreover when only looking at the rate of severe adverse events as defined above the finding was that none occurred when paralysis was used vs 9 when no paralysis was employed and 5 when no premedication was used at all.  The rate of bradycardic events was less in the paralytic group but rates of oxygen desaturation between the three arms were no different.

How do we interpret the results?

Based on the results from the registry it looks like paralysis is a good thing here when electively intubating infants.   If we try to determine the reason for it I suspect it may have much to do with the higher likelihood of success on the first attempt at placing an ETT. The longer it takes to place the ETT or the more number of attempts requiring intermittent PPV in a patient who truly needs a tube the greater the likelihood that you will see adverse events including bradycardia.  It may simply be that a calm and still patient is an easier intubation and getting the tube in faster yields a more stable patient.

I am biased though and I think it is worth pointing out another possible reason for the differing results.  One hospital in this study routinely used premedication and the other did not.  Almost 3/4 of the patients came from one hospital which raises the possibility that skill set could be playing a role.  If the skill of providers at the two hospitals differed, the results could reflect the variable skill in the practitioners versus the difference in the medications used themselves.  What I don’t know though is whether the two share the same training program or not.  Are the trainees the same at both sites (google maps says the two sites are 11 minutes away by car)?  The difference still might be in local respiratory therapists or Neonatologists intubating as well.  Regardless, the study provides evidence that paralysis makes a difference.  To convince those out there though who remain skeptical I think we are going to need the registry to take part in a prospective trial using many centres.  A format in which several centres that don’t use paralysis are compared to several who do routinely would help to sort out the concern in skill when looking only at two centres.  This wouldn’t be randomized of course but I think it would be very difficult at this point to get a centre that strongly believes in using paralysis to randomize so a prospective study using groups chosen by the individual centre might be the next best thing.  If anyone using the registry is reading this let me know what you think?