Does size really matter when weaning from an incubator?

Look around an NICU and you will see many infants living in incubators. All will eventually graduate to a bassinet or crib but the question always is when should that happen? The decision is usually left to nursing but I find myself often asking if a baby can be taken out. My motivation is fairly simple. Parents can more easily see and interact with their baby when they are out of the incubator. Removing the sense of “don’t touch” that exists for babies in the incubators might have the psychological benefit of encouraging more breastfeeding and kangaroo care. Both good things.

For ELBW and VLBW infants humidity is required then of course they need this climate controlled environment. Typically once this is no longer needed units will generally try infants out of the incubator when the temperature in the “house” is reduced to 28 degrees. Still though, it is not uncommon to hear that an infant is “too small”. Where is the threshold though that defines being too small? Past research studies have looked at two points of 1600 vs 1800g for the smallest of infants. One of these studies was a Cochrane review by New K, Flenady V, Davies MW. Transfer of preterm infants for incubator to open cot at lower versus higher body weight. Cochrane Database Syst Rev 2011;(9). This concluded that early transition was safe for former ELBWs at the 1600g weight cut off.

What about the majority of our babies?

While the ELBW group takes up a considerable amount of energy and resources the later preterm infants from 29 to 33 6/7 weeks are a much larger group of babies. How safe is this transition for this group at these weights? Shankaran et al from the NICHD published an RCT on this topic recently; Weaning of Moderately Preterm Infants from the Incubator to the Crib: A Randomized Clinical Trial. The study enrolled

Infants in this gestational age range with a birth weight <1600g were randomly assigned to a weaning weight of 1600 or 1800 g. Within 60 to 100 g of weaning weight, the incubator temperature was decreased by 1.0°C to 1.5°C every 24 hours until 28.0°C. Weaning to the crib occurred when axillary temperatures were maintained 36.5°C to 37.4°C for 8 to 12 hours. Clothing and bedcoverings were standardized. The primary outcome was LOS from birth to discharge.

A total of 366 babies were enrolled (187 at 1600g and 179 at 1800g. Baseline characteristics of the two groups revealed no statistical differences. Mean LOPS was a median of 43 days in the lower and 41 days in the higher weight group (P = .12). After transition to a crib weight gain was better in the lower weight group, 13.7 g/kg/day vs 12.8 g/kg/ day (P = .005). Tracking of adverse events such as the incidence of severe hypothermia did not differ between groups. The only real significant difference was a better likelihood of weaning from the incubator in the higher group at 98% success vs 92% on the first attempt. Putting. That in perspective though, a 92% success rate by my standards is high enough to make an attempt worthwhile! 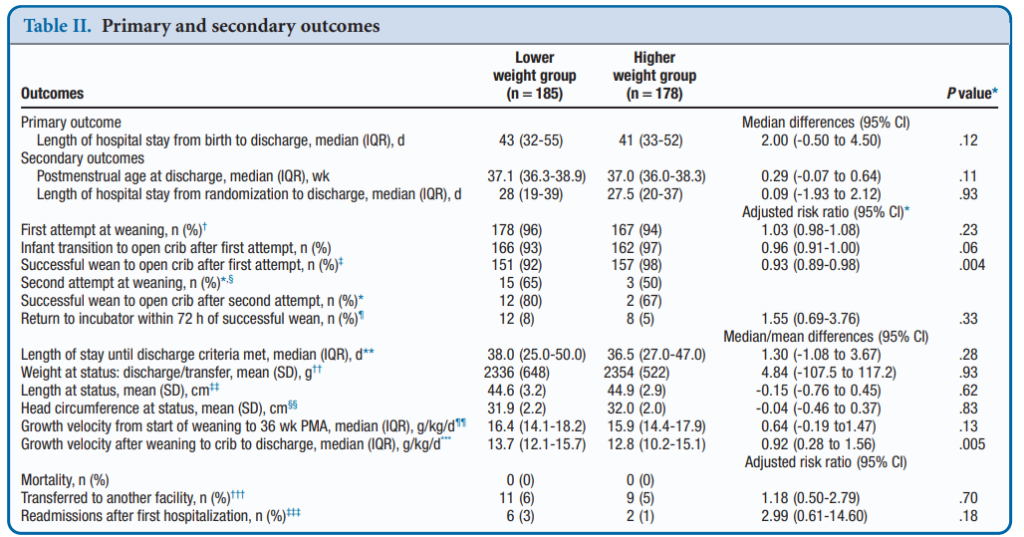 The authors have essentially shown that whether you wean at the higher or lower weight threshold your chances of success are pretty much the same. Curiously, weight gain after weaning was improved which seems counter intuitive. I would have thought that these infants would have to work extra hard metabolically to maintain their temperature and have a lower weight gain but that was not the case. Interestingly, this finding has been shown in another study as well; New K, Flint A, Bogossian F, East C, Davies MW. Transferring preterm infants from incubators to open cots at 1600 g: a multicentre randomised controlled trial. Arch Dis Child Fetal Neonatal Ed 2012;97:F88-92. Metabolic rate has been shown to increase in these infants but skin fold thickness has been shown to increase as well in infants moved to a crib. How these two things go together is a little beyond me as I would have thought that as metabolic rate increases storage of tissue would slow. Not apparently the case but perhaps just another example of the bodies ability to overcome challenges when put in difficult situations. A case maybe of “what doesn’t kill you makes you stronger?”

The authors do point out that the intervention was unmasked but the standardization of weaning procedure and garments used in the cribs should have overcome that. There were 36% of parents who did not consent to the study so their inclusion could have swayed the results perhaps but the sample size here was large despite that. That the final results agree with findings in ELBW infants suggests that the results are plausible.

What I think this study does though is tell us overall that weaning at a smaller weight is at least alright to try once one is at minimal settings in an incubator. Will this change your units practice? It is something that at least merits discussion.