Phototherapy is one of the “bread and butter” treatments in the newborn. For sure it has gone through changes over the years as different light sources have been developed that provide more limited spectrums of blue/green light wavelengths. Gone are the old long white tubes in favour of special blue light emitting banks of lights and with it bilirubin levels are effectively dropping quickly worldwide. There have been a couple concerns raised with phototherapy over the years. One concern has been the risk of DNA damage as shown by Ramy N et al in Jaundice, phototherapy and DNA damage in full-term neonates. It was found in this study that the duration of phototherapy but not it’s intensity were related to the extent of methylation of DNA which is a marker of damage. Shorter durations would therefore be preferable. Repair of damaged DNA is thought in some ways to contribute to risk of cancer so although this has not been demonstrated with phototherapy the concern has been raised before. The other concern pertains to the ELBW infant with very thin skin. In the randomized trial for babies under 1000g entitled Aggressive vs. conservative phototherapy for infants with extremely low birth weight. In this trial a lower threshold for starting phototherapy was used in the “aggressive group”. The findings of this study in a preplanned subgroup analysis was that the babies from 500-750g that had a lower threshold for starting and continuing phototherapy had a trend towards a higher mortality; relative risk, 1.13; 95% CI, 0.96 to 1.34 as the CI just crossed 1. With this information in the literature it stands to reason that the question would come up as to whether continuous phototherapy is needed or whether one could use cycled intermittent phototherapy to give infants “phototherapy breaks”.

Such a study has now been published

This study Cycled Phototherapy Dose-Finding Study for Extremely Low-Birth-Weight Infants A Randomized Clinical Trial enrolled babies with birthweights between 401 – 1000g and Initially randomized using a 1:1:1 ratio to 3 treatment groups: continuous PT (usual care), a PT regimen of 30 minutes or more per hour for each cycle, or a PT regimen of 15 min/h or more. The minutes per hour of PT could be increased for the cycled if TSB values reached specified thresholds. After the first 100 patients a planned analysis was done and the 30 minute group was ended as there was no difference between this group and the 15 minute one. The light sources and spectral irradiance (combination of intensity and distance from the patient) used were all the same and collection times for serum bilirubin levels were standardized as much as possible. Bilirubin levels were collected daily for the first 7 days and anytime infants were on phototherapy. The authors also included a stepwise prolongation of phototherapy for the shorter cycled groups if bilirubin levels were not responding to the provided phototherapy. I have to say they really did a good job of removing as many potential variables to outcome as they could!

The primary outcomes were mean peak TSB levels and mean PT hours through day 14 across all centers and predischarge wave V latency brainstem auditory evoked potential (BAER). In total 305 infants were randomized in the study and the interestingly the study was stopped at that point as a larger study was approved to obtain more precise estimates in the future around mortality and morbidity as a primary outcome. During the trial the authors received approval to do so with this new primary outcome and so we have what we have to analyze.

The authors found that there was no difference in the mean peak bilirubin even among high risk patients when given cycled phototherapy for 15 minutes an hour vs continuous. The total amount of hours of phototherapy was approximately halved. No statistical difference in mortality was observed although as mentioned above this was not the primary endpoint of the study.

Looking at duration of phototherapy in terms of hours per day over the first two weeks is shown below. Although a pre-specified plan was in place to increase time as needed to decrease bilirubin levels the amount of time remained fairly consistent for the cycled group with some increase needed in the early days which would be expected given the typical higher biirbubin tendency in the first week of life.

The BAER tests did not demonsrate any difference between the children who had cycled or continuous phototherapy suggesting that no added neurotoxicity occurred from interrupting phototherapy.

What can we take from this?

All of these infants were ELBW and wth that had very thin skin. Would cycled phototherapy be as effective in more mature infants? As the authors of the study point out, there have already been several trials in more mature infants demonstrating such effects and arguing that continuous phototherapy is not needed. At the very least this paper and the others before it would argue that interrupting phototherapy to allow breastfeeding or some skin to skin time with the mother or father should be acceptable. In the past I can remember many instances of having ordered intensive phototherapy and then questioned whether mom can breastfeed as technically it is supposed to be continuous. With this information I would suggest that continuing to work on oral feeding skills at the breast is reasonable. Clearly this won’t work in the population studied here as they are too small but for the larger infants there would not seem to be harm.

I suspect the larger study to come may change practice if a higher mortality is indeed shown for continuous phototherapy but for now we will need to wait and see. In a few years we will get the chance to review that study here. 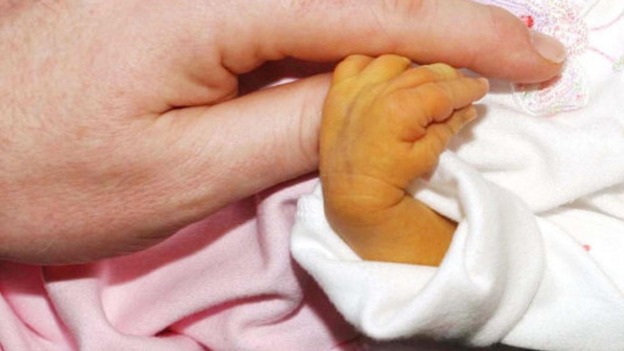 Has the Magic Bullet to Prevent Kernicterus Been (Re)Discovered?

As the saying goes “What is old is new again” and that may be applicable here when talking about prevention of kernicterus.  In the 1990s there was a great interest in a class of drugs called mesoporphyrins in the management of hyperbilirubinemia.  The focus of treatment for many years had been elimination of bilirubin through the use of phototherapy but this shifted with the recognition that one could work on the other side of the equation.  That is to prevent the production of bilirubin in the first place.

Tin mesoporphyrins (SnMP) have the characteristic of being able to inhibit the enzyme hemo oxygenase quite effectively.

By achieving such blockade the breakdown of heme to carbon monoxide and biliverdin (the precursor of bilirubin) is inhibited.  In so doing, the production of bilirubin is reduced making one less dependent on phototherapy to rid the body of elevated levels.  So simple and as you might imagine a good reason for there to have been significant interest in the product.  One article by Martinez et al entitled Control of severe hyperbilirubinemia in full-term newborns with the inhibitor of bilirubin production Sn-mesoporphyrin. was published in 1999 and demonstrated that infants with severe hyperbilirubinemia between 48-96 hours could have their need for phototherapy eliminated by use of the product compared to 27% of the infants in the control group needing treatment.  Additionally, total bilirubin samples were reduced from a median of 5 to 3 with the use of one IM injection of SnMP.  This small study was hampered though by inability to really look at adverse outcomes despite its effectiveness.  What has been seen however is that SnMP if given to infants who are then treated with white lights can create a rash which is not seen however when special blue light is employed.

Two other studies followed exploring the use of SnMP in cases of severe hyperbilirubinemia in term infants and were the subject of a Cochrane review in 2003.  The conclusions of the review essentially became the death nell for the therapy as they were as follows.

“…may reduce neonatal bilirubin levels and decrease the need for phototherapy and hospitalization. There is no evidence to support or refute the possibility that treatment with a metalloporphyrin decreases the risk of neonatal kernicterus or of long-term neurodevelopmental impairment due to bilirubin encephalopathy… Routine treatment of neonatal unconjugated hyperbilirubinemia with a metalloporphyrin cannot be recommended at present.”

The literature after this basically dries up, that is until this month when a paper emerges that is best described as a story of mystery and intrigue!

This paper as you read it almost seems like a conspiracy story.  The paper is by Bhutani et al (as in the nomogram) Clinical trial of tin mesoporphyrin to prevent neonatal hyperbilirubinemia.  The study set out to answer a different question than had been previously studied.  The question here was, if you provided a single IM dose of SnMP to infants who were at or above the 75%ile on the risk nomogram, could you prevent the need for phototherapy or exchange transfusion as the primary outcome.  Secondarily, the authors truly wanted to demonstrate safety of the product and planned on recruiting 800 patients per arm in the study.  The study appeared to be well planned and as with many studies had a safety monitoring committee which was to do interim analyses.  After the first analysis the FDA became involved and recommended studies to look at a prophylactic versus therapeutic approach.  Due to the interim analysis the study had been halted and after the FDA made their suggestion the study was simply never restarted as future studies were planned to look at the effectiveness and safety of the two approaches.  The authors state that they planned on reporting their results in 2006/7 but elected to wait until long term data emerged.  Now finally 9 years later they decided to release the results of the partially completed study.  The story around this study I find as interesting as the results they obtained!

Before closing the study they managed to recruit 87 into the intervention arm and 89 into the placebo group and lost none to follow-up.  One dose of SnMP had a significant effect on the trajectory of curves for bilirubin production as can be seen in the first figure. 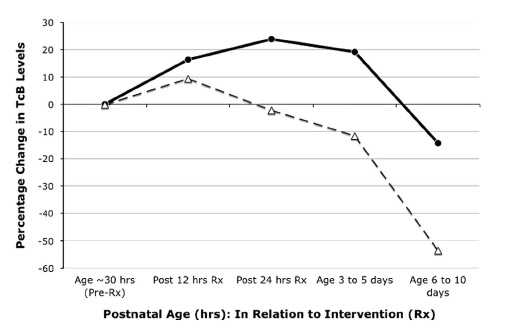 The graph below demonstrates what percentage of patients had a bilirubin level above 220 umol/L (12.9 mg/dl) after the single injection of SnMP (black bars) compared to placebo (white bars). 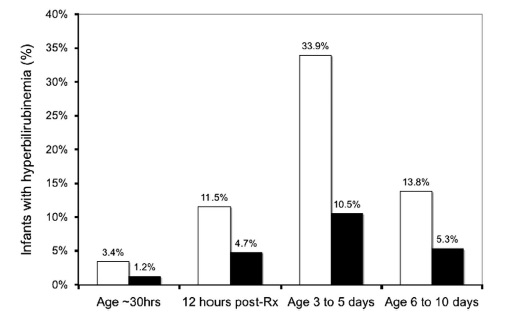 What can we do with these results?

It would be tough to argue anything other than this being an effective treatment to prevent significant hyperbilirubinemia.  Unfortunately, like many studies that were never completed this one remains underpowered to conclusively demonstrate that the use of SnMP is safe in both the short and long term periods.  The absence of such data make it very difficult to recommend SnMP as standard of care.  One has to add to this that while we have evidence to show it reduces the rate of rise of bilirubin, what we don’t know is whether in a larger study the incidence of bilirubins > 425 umol/L or the need for exchange transfusion might be reduced.  If this were the case, it would make for a compelling argument to try SnMP.

That is the approach for standard of care though.  In the setting of a patient with a known blood group incompatibility who was at high risk for exchange transfusion, if they received IVIG and the bilirubin continued to climb might there be a role here?  I would tend to say yes if we could get our hands on some.  The authors by sharing this data have shown the medication is effective in doing what it is supposed to do.  Given that at least in our centre all of our lights are of the new variety, the risk of rash would be nonexistent.  The risk for kernicterus or at least an exchange transfusion though would not be minimal so if we have this in our toolbox I would after weighing the risks opt to give it.

I certainly wonder if there are places out there who have used it and if so what is your experience?