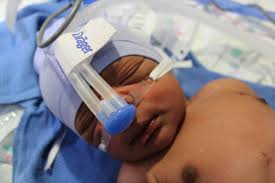 High Frequency Nasal Ventilation: What Are We Waiting For?

I will admit it.  I resist change at times just like many others.  This may come as a surprise to some of you who have worked with me and accused me of bringing too much change at times to the units.  The truth though is that when one understands something and is enthusiastic about implementation the change does not seem so difficult.  When it isn’t your idea though we may find ourselves a little uneasy about adopting this unfamiliar practice.

Such has been my experience with nasal HFOV.  It is a strategy that has been around for over five years but has seen slow adoption among centres in Canada and has trickled into practice in Winnipeg on a few occasions.  In each occasion when I have been asked about either continuing or perhaps starting this therapy I have shrugged my shoulders and confessed my inexperience with the modality.  Sure I have used HFOV through an ETT but through prongs or a mask?!  How would it work?  Could it cause harm?  What would the actual indications be?  How would our in house physicians and NNPs respond to abnormal gases overnight even if I felt comfortable with using it?  These sorts of questions have led to virtual inertia in my acceptance of the strategy.

Before I go on it would be good to see an example of how it is set up.  The MedinCNO device is capable of delivering such non-invasive HFOV and can be seen in this short video.

One could use the strategy either prophylactically to extubate an infant or as rescue to prevent reintubation if trials of either CPAP or NIPPV were unsuccessful.  HFOV is known to be very effective at clearing CO2 when used through an ETT so perhaps nasal application could also lower pCO2 and achieve a similar effect.  This was tested using a neonatal lung simulator by Mukeji A et al Nasal high-frequency oscillation for lung carbon dioxide clearance in the newborn.  In this study CO2 was introduced into the manequin and the amount of exhaled CO2 determined while on CPAP, NIPPV and nasal HFOV.  Interestingly during CPAP no exhaled CO2 could be detected while CO2 clearance occurred during NIPPV and nasal HFOV although it was three-fold greater with HFOV.  In theory then CO2 clearance would appear to be better so in the case of ventilatory failure as evidenced by CO2 retention this modality would seem to win out.

Clinical Evidence for Use

There is one RCT in term infants with TTN to support the practice while the rest are unblinded case series with no controls. Four Canadian NICUs recently described their experience however using a retrospective analysis.  Included were 79 instances of HFOV distributed as follows; 73% utilized as rescue from another mode and in 27% used as the primary mode for extubation.  The outcomes are shown in the table: 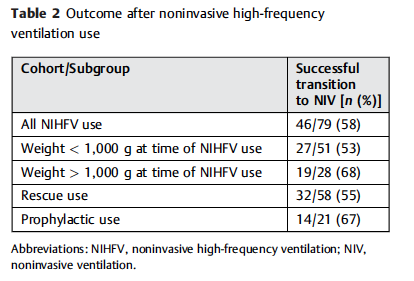 In 45% of cases the patients needed  intubation after first trialing CPAP or NIPPV while in 33% of cases following extubation the infants needed replacement of the endotracheal tube.  The numbers here are small so it is difficult to truly compare them to other studies with confidence but reintubation rates of 40-44% have been noted recently when using NIPPV or CPAP so the numbers are at least consistent.

One aspect though that caught my eye was the duration of use for HFOV across these 79 patients.  The median use was 57 hours with the longest duration being just over 400 hours.  It would seem that the use of this modality for the most part is as a bridge to something else.  The median duration of 2.5 days is much shorter than the weeks that some of our smallest infants remain on CPAP/NIPPV for.  Whether for rescue or prophylaxis this is not a long term option.

Another point worth noting though is the question of whether it is the pressure or oscillatory wave that is leading to success.  As the authors note, there were a wide range in applications of MAP, delta P and frequency.

MAP ranges from 8 – 24 cm H2O while frequency from 6 – 14 hz and amplitude varied widely depending on the device used but was as high as 100%.  While high MAP has been used invasively though an ETT I can’t help but wonder if in some cases the real benefit was the high MAP.  What would happen for example if the centres had simply raised the CPAP to 10, 12 or even higher?

In the end it would seem that in principal it is an effective therapy that may be able to remove CO2 more efficiently than the other modes.  What we don’t have are RCTs in the smallest babies comparing HFOV to NIPPV or CPAP with adequate power to detect differences.  I suspect these will come soon enough but what do we do in the meantime?   The main reservation I have has to do with safety.  We truly have little if any data on this without proper trials to ease such worry.  When a patient is in front of us though and is failing CPAP or NIPPV what are we to do?  Should we intubate or trial this modality based on the evidence thus far?

I might be tempted to trial HFOV in this circumstance but as with any new therapy we need education for all staff.  Everyone caring for our infants need to understand what they are using and how to respond based on clinical findings.  This is the real issue with safety that I see and until such time that we have widespread education across RRT, nursing and medicine I would suggest we use this with trepidation.  This is not a rejection of the modality in the least but rather a call to come together as a team and see how implement this in such a way that will provide direction to caregivers, provide a consistent approach with respect to length of use, indications and when to change direction entirely.  Time to call a meeting of the minds I think.