Continuous glucose monitoring in NICU may be around the corner

We sure do poke a lot of babies to test their blood glucose levels.  Some of these babies don’t have so much blood to spare either so checking sugars multiple times a day can drain the body of that precious blood they so need for other functions.  Taking too much can always be addressed with a blood transfusion but that as I see it may be avoidable so shouldn’t we do what we can to cut down on blood work? Those with diabetes will be familiar with a continuous glucose monitor (CGM) which is implanted in the skin and can stay in place up to 7 days.  The device does require calibration twice a day with a capillary sample to verify it is reading well but this saves a couple pokes a day for those who check four times a day.  Such a device could be useful in the NICU where those with hypoglycemia may be checked 6 or more times per day if they are either hypo or hyperglycemic.  Cutting this down to two a day would certainly we something worth striving for and if not for the reduction in blood loss then for the minimization of painful procedures.

Does it work in small babies?

A natural question for sure.Uettweller et al published Real-time continuous glucose monitoring reduces the duration of hypoglycemia episodes: a randomized trial in very low birth weight neonates. In babies with a BW < 1500g they were able to demonstrate in 43 babies (21 with traditional intermittent glucose checks vs 22 with CGM)  a  reduction in duration of hypoglycemia episodes per patient (CGM 44[10-140] min versus IGM 95[15-520] min, p<0.05). Moreover in this brief study of the first three days of life they also found a reduction in the total number of pokes per patient of 5 pokes (22 vs 16).  The numbers however are small and the duration short in only being three days so it did not provide a perfect answer as to whether this technology would work in babies from 500-750g reliably but certainly for older babies, continuous knowledge of the blood glucose in theory would allow for faster response to low sugars and as a result as evidenced by the results led to a decrease in time with a low blood glucose.

Improving on these results

Galderisi et al just published Continuous Glucose Monitoring in Very Preterm Infants: A Randomized Controlled Trial.  The study remains small at 50 and the target group ranging from 28-31 weeks (all < 1500g) but the study followed babies for a longer time frame of 7 days. This study employed an algorithm for adjustments in glucose infusion that required staff to first put data into an excel spreadsheet and then the predictive algorithm dictated whether to increase or decrease the rate of dextrose infusion.  In one arm, CGM results were unblinded and the practitioners relied on the rate of change to determine the predicted glucose 15 minutes into the future while in the blinded group the CGM was used but results were not available (retrospectively yes) so changes were made based on the usual practice of obtaining point of care results and modifying glucose infusion rates based on that result.  The primary outcome of interest here was percentage of time in the euglycemic range of 72 – 144 mg/dL (4-8 mmol/L).   Secondary outcomes were time spent hypo or hyperglycemic (mild hypoglycemia (M-HYPO) (47–71 mg/dL); severe hypoglycemia (S-HYPO) (<47 mg/dL); mild hyperglycemia (M-HYPER) (145–180 mg/dL); and severe hyperglycemia (S-HYPER) (>180 mg/dL)).  The study lasted a total of seven days allowing the use of one subcutaneous probe per patient as they can last one week after insertion.

How did the approaches compare? 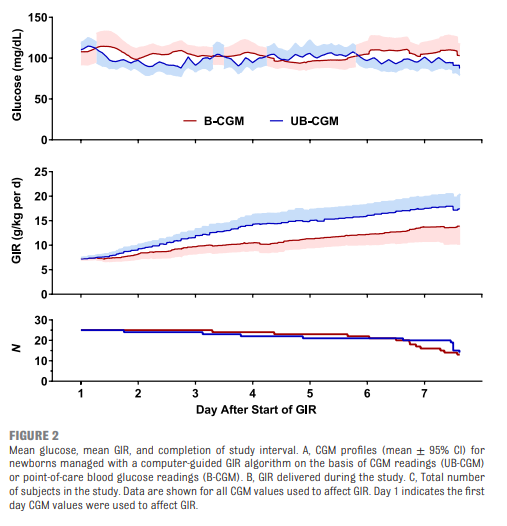 As for secondary outcomes one can see that the time spent in the hypo/hyper areas was much less as a percentage of time than using traditional methods of intermittent sampling.  One interesting outcome was that the total number of samples used over the study was an average of 2.4 tests per day in the unblinded group vs 2.59 per day in the intermittent sampling group which although statistically different does not seem to have much clinical impact. 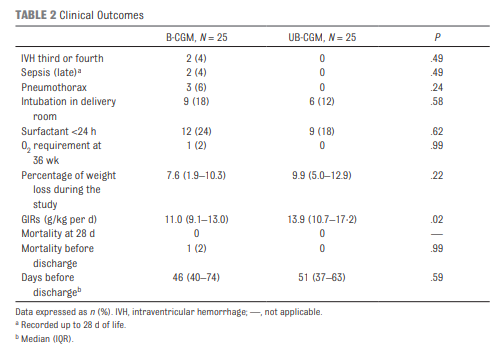 The idea of using an implanted CGM for infants in the NICU is one that excites me.  The lack of a reduction in pokes in a meaningful way is disappointing but I can’t help but wonder if the effect was different whether you were in the first or second half of the week.  What if glycemic control in these 29-31 week infants had stabilized by 2-3 days such that you only needed one or two glucose checks in the last half of the week per day?  The CGM requires calibration twice daily with POC samples so the lack of a difference my be due to those issues.  Future, calibration is rumoured to be possible with one sample so that may change.

There is no disputing though that the use of the predictive algorithm made a difference in terms of avoidance of hypo/hyperglycemic episodes.  A larger study would be needed to look at whether this impacts harm that may be associated with such variability such as IVH or ROP but it certainly is promising.  The biggest issue here is that I cannot see people manually inputting glucose readings on the CGM into an excel sheet in everyday practice.  For this to become widely adopted, a simplified approach to prediction would be required or even better a feedback loop whereby data from the CGM would relay to the infusion pump and rates adjusted automatically (with manual override available).

The use of CGM is coming though and I can’t help but think in the larger babies born to mothers with diabetes there would be a real heal sparing effect with these.  Might this be the next study?