Magnetic acupuncture coming to an NICU near you?

by All Things Neonatal | Aug 2, 2017 | Neonatal, Neonatology, newborn, Pain in the Neonate, preemie

I would consider myself fairly open minded when it comes to care in the NICU.  I wouldn’t call myself a maverick or careless but I certainly am open to new techniques or technologies that may offer a better level of care for the babies in our unit.  When it comes to “non-Western” concepts though such as therapeutic touch, chiropractic manipulations of infants and acupuncture (needle or otherwise) I have generally been a skeptic.  I have written about such topics before with the most popular post being Laser acupuncture for neonatal abstinence syndrome.  My conclusion there was that I was not a fan of the strategy but perhaps I could be more open to non traditional therapies.

This would appear to be the newest and perhaps strangest (to me at least) approach to pain relief that I have seen.  I do love name of this study; the MAGNIFIC trial consisted of a pilot study on the use of auricular magnetic acupuncture to alleviate pain in the NICU from heel lances.  The study was published in Acta Paediatrica this month; Magnetic Non-Invasive Acupuncture for Infant Comfort (MAGNIFIC) – A single-blinded randomized controlled pilot trial.  The goal here was to measure pain scores using the PIPP scoring system for pain in the neonate before during and after a painful experience (heel lance) in the NICU.  Being a pilot study it was small with only 20 needed per arm based on the power calculation to detect a 20% difference in scores.  The intervention used small magnets placed at specific locations on the ear of the infant at least two hours before the heel lance was to occur.  Before I get into the results, the authors of the study provide references to explain how the therapy works.  Looking at the references I have to admit I was not able to obtain complete papers but the evidence is generally it would appear from adult patients.  The explanation has to do with the magnetic field increasing blood flow to the area the magnet is applied to and in addition another reference suggests that there are affects the orbitofrontal and limbic regions which then impacts neurohormonal responses as seen in functional MRI.  The evidence to support this is I would have thought would be pretty sparse but I was surprised to find a literature review on the subject that looked at 42 studies on the topic.  The finding was that 88% of the studies reported a therapeutic effect.  The conclusion though of the review was that the quality of the included studies was a bit sketchy for the most part so was not able to find that this should be a recommended therapy.

So what were the results?

Despite my clear skepticism what this study did well was that aside from the magnets, the intervention was the same.  Twenty one babies received the magnetic treatments vs 19 placebo.  There was a difference in the gestational ages of the babies with the magnet treated infants being about two weeks older (35 vs 33 weeks).  What difference that might in and of itself have on the PIPPs scoring I am not sure.  The stickers were applied to the ears with and without magnets in a randomized fashion and the nurses instructed to score them using the PIPP scoring system.  Interestingly, as per their unit policy all babies received sucrose as well before the intervention of a heel lance so I suppose the information gleaned here would be the use of magnets as an adjunctive treatment.  No difference was noted in the two groups before and after the heel lance but during the procedure the magnet treated infants had a difference in means (SD): 5.9 (3.7) v 8.3 (4.7), p=0.04).  No differences were found in secondary measures such as HR or saturation and no adverse effects were noted.  The authors conclusions were that it was feasible and appears safe and as with most pilot studies warrants further larger studies to verify the results.

Should we run out and buy it?

One of the issues I have with the study is that in the introduction they mention that this treatment might be useful where kangaroo care (KC) is not such as a critically ill infant.  Having placed infants who are quite sick in KC and watched wonderful stability arise I am not sure if the unit in question under utilizes this important modality for comfort.

The second and perhaps biggest issue I have here is that although the primary outcome was reached it does seem that there was some fishing going on here.  By that I mean there were three PIPP scores examined (before, during and after) and one barely reached statistical significance.  My hunch is that indeed this was reached by chance rather than it being a real difference.

The last concern is that while the intervention was done in a blinded and randomized fashion, the evidence supporting the use of this in the first place is not strong.  Taking this into account and adding the previous concern in as well and I have strong doubts that this is indeed “for real”.  I doubt this will be the last we will hear about it and while my skepticism continues I have to admit if a larger study is produced I will be willing and interested to read it. 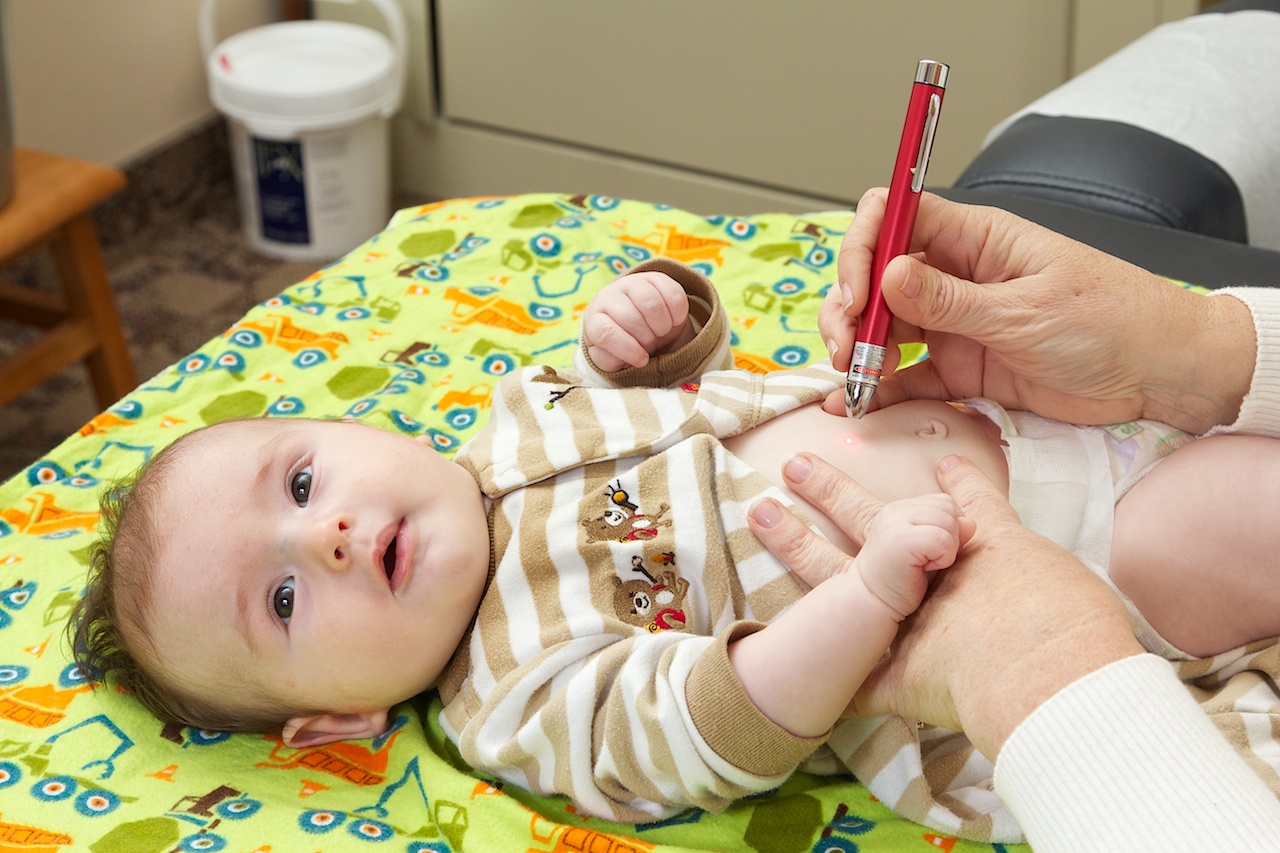 As anyone who has been reading this blog knows, I have an affinity for anything that is non-invasive and improves the care of newborns.  Add to this my interest in Neonatal Abstinence (which has been the focus of other pieces such as Long term cognitive deficits in infants exposed to in-utero opioids and polysubstance use. In a rare finding, girls may have worse outcomes.) and a recent report of laser acupuncture for adjuvant treatment of neonatal abstinence syndrome would have to pique my interest.  In 2014 a case report entitled  Laser acupuncture as an adjuvant therapy for a neonate with neonatal abstinence syndrome (NAS) due to maternal substitution therapy: additional value of acupuncture. was published by Raith.  I recall seeing this paper prior to starting this blog and Facebook page and made a mental note to check it out someday.  That someday is upon me now that an RCT has been published on the subject which will be looked at below.

What is laser acupuncture?

Before we get into critiquing such a study it is worth explaining what laser acupuncture is.  From the website acupuncture today I found the following background:

“In 1991, a study was done in Novosibirsk, Russia that applied directly to the study of acupuncture. Researchers shined light on various parts of the body and found that light traveled under the skin to other acupuncture points, but it didn’t travel to places that were not on acupuncture meridians. It appears that the body contains a sort of fiber optic network—where light enters an acupuncture point, travels through the meridian and can be detected at other places along the meridian with a sensitive photon detector. This is a fascinating study showing how light is actually received, used and transmitted throughout the body.”

The RCT in question above is another paper by Raith W et al Laser Acupuncture for Neonatal Abstinence Syndrome: A Randomized Controlled Trial.

This study compared patients receiving treatment for NAS with morphine and phenobarbital and compared 14 in each group on a blinded fashion to laser acupuncture or nothing in addition to the standard regimen.  They avoided the need for a placebo in that the intervention was done by the health care provider and then a separate person calculated a pain score who was blind to whether the laser had been provided or not.  By blinding the people scoring they hoped to address the criticism that would be present had the study been unblinded. The acupuncture was performed daily at five ear and four body points bilaterally with the primary outcome being duration of oral opiate use. 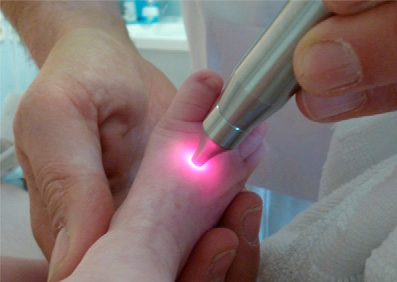 The authors found a reduction in days of opiate treatment but being a small study it would be considered a pilot at best.  The results were 28 days (22 to 33) vs 39 days (32 to 48), respectively, P =.019 and the authors make a comment that phenobarb levels were similar between the groups as well but with overall shorter lengths of stay of 35 days (25 to 47) vs 50 days (36 to 56), respectively, P = .048.  There are several issues with the study though and they are as follows.  Yes, the light therapy was provided behind a closed door but how do we know that the providers truly kept it a secret during the whole stay of the patient? What medications were the mothers taking and at what doses and for what duration?  Was the exposure between groups really the same? Also there was no standard means of weaning that I can see so how do we know by chance that the difference is simply who was on at the time with respect to physician deciding on aggressiveness of weaning.  Another issue is that women on replacement medications such as methadone or suboxone were excluded as were women with polysubstance abuse.  How close to our patient population really were these patients?  Lastly, nearly significant was a preponderance of males in the conventional group and we all know how males generally do compared to females in most studies.  Nonetheless it is a exciting study to imagine an effect from and that is what the authors I think were banking on.

What about laser acupuncture for treatment of pain?

One other study comparing sucrose to laser acupuncture for prevention of pain with heel lances. In this study of 42 infants randomized to the intervention or sucrose the authors concluded that sucrose was superior to acupuncture for managing pain from heel lancing.  This study did not have a third arm in which no treatment was given (likely due to it being unethical) so what we can’t say for sure is whether laser is better than nothing.

Personally I find a bit of a leap to believe that shining a light through the skin would have an effect on pain perception by anyone.  I can certainly understand the concept of putting a needle into tissue or applying pressure no different from the effect of rubbing ones temples when they have a headache (works for me at least).  The Chemistry major in me though has trouble with the effect of photons passing through tissue even if directed at acupuncture points.  Having said that the only positive thing I can say is that a quick search for such instruments shows them to be commercially available and as cheap as $50 or so.  I have no doubt there are people who will read this RCT and be impressed with its additional purported impact on NAS and thankfully if they do decide to pursue this intervention they will not have spent a fortune on it.  Money in health care should be directed to what works to help patients and the skeptic in me just isn’t buying this even if it appeals to my curiosity with non-invasive strategies.