Is skin to skin care truly good for the developing brain?

Skin to skin care or kangaroo care is all the rage and I am the first one to offer my support for it.  Questions persist though as to whether from a physiological standpoint, babies are more stable in an isolette in a quiet environment or out in the open on their mother or father’s chests. Bornhorst et al expressed caution in their study Skin-to-skin (kangaroo) care, respiratory control, and thermoregulation.  In a surprising finding, babies with an average gestational age of 29 weeks were monitored for a number of physiological parameters and found to have more frequent apnea and higher heart rates than when in an isolette.  The study was small though and while there were statistical differences in these parameters they may not have had much clinical significance (1.5 to 2.8 per hour for apnea, bradycardia or desaturation events).  Furthermore, does an increase in such events translate into any changes in cerebral oxygenation that might in turn have implications for later development?  Tough to say based on a study of this magnitude but it certainly does raise some eyebrows.

What if we could look at cerebral oxygenation?

As you might have guessed, that is exactly what has been done by Lorenz L et al in their recent paper Cerebral oxygenation during skin-to-skin care in preterm infants not receiving respiratory support.The goal of this study was to look at 40 preterm infants without any respiratory distress and determine whether cerebral oxygenation (rStO2)was better in their isolette or in skin to skin care (SSC).  They allowed each infant to serve as their own control by have three 90 minute periods each including the first thirty minutes as a washout period.  Each infant started their monitoring in the isolette then went to SSC then back to the isolette.  The primary outcome the power calculation was based on was the difference in rStO2 between SSC and in the isolette.  Secondary measures looked at such outcomes as HR, O2 sat, active and quiet sleep percentages, bradycardic events as lastly periods of cerebral hypoxia or hyperoxia.  Normal cerebral oxygenation was defined as being between 55 to 85%.

No differences were seen in bradycardic events, apnea, cerebral hypoexmia or hyperoxemia.  The authors found that SSC periods in fact failed the “non-inferiority” testing indicating that from a rStO2 standpoint, babies were more stable when not doing SSC!  Taking a closer look though one could argue that even if this is true does it really matter?  What is the impact on a growing preterm infant if their cerebral oxygenation is 1.3 percentage points on average lower during SSC or if their HR is 5 beats per minute faster?  I can’t help but think that this is an example of statistical significance without clinical significance.  Nonetheless, if there isn’t a superiority of these parameters it does leave one asking “should we keep at it?”

Benefits of skin to skin care

Important outcomes such as reductions in mortality and improved breastfeeding rates cannot be ignored or the positive effects on family bonding that ensue. Some will argue though that the impacts on mortality certainly may be relevant in developing countries where resources are scarce but would we see the same benefits in developed nations.  The authors did find a difference though in this study that I think benefits developing preterm infants across the board no matter which country you are in.  That benefit is that of Quiet Sleep (QS).  As preterm infants develop they tend to spend more time in QS compared to active sleep  (AS).  From Doussard- Roossevelt J, “Quiet sleep consists of periods of quiescence with regular respiration and heart rate, and synchronous EEG patterns. Active sleep consists of periods of movement with irregular respiration and heart rate, and desynchronous EEG patterns.”  In the above table one sees that the percentage of time in QS was significantly increased compared to AS when in SSC.  This is important as neurodevelopment is thought to advance during periods of QS as preterm infants age.

There may be little difference favouring less oxygen extraction during isolette times but maybe that isn’t such a good thing?  Could it be that the small statistical difference in oxygen extraction is because the brain is more active in laying down tracks and making connections?  Totally speculative on my part but all that extra quiet sleep has got to be good for something.

To answer the question of this post in the title I think the answer is a resounding yes for the more stable infant.  What we don’t know at the moment except from anecdotal reports of babies doing better in SSC when really sick is whether on average critically ill babies will be better off in SSC.  I suspect the answer is that some will and some won’t.  While we like to keep things simple and have a one size fits all answer for most of our questions in the NICU, this one may not be so simple.  For now I think we keep promoting SSC for even our sick patients but need to be honest with ourselves and when a patient just isn’t ready for the handling admit it and try again when more stable.  For the more stable patient though I think giving more time for neurons to find other neurons and make new connections is a good thing to pursue! 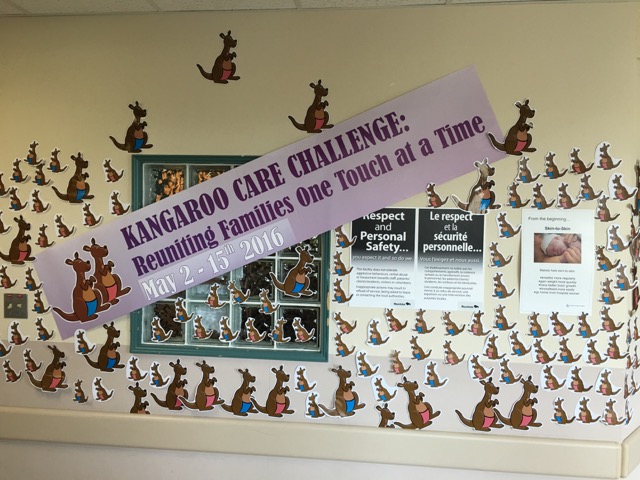 What Are You Waiting For? Take the Kangaroo Care Challenge!

We took the challenge this year again and I am happy to announce achieved even greater success than last time around!  Since the last time we have purchased special clothing to facilitate the practice and with this new initiative perhaps it helped us reach new highs!  Here are the results paraphrased from one of our very own!

The really great part of this is the involvement we had from L&D and LDRP.  Both units kept log sheets and informed patients and visitors about the importance of Skin to Skin.

L&D logged 65 hours and 27 minutes for 58 patients which equals more than an hour per patient, their patients don’t stay as long.

LDRP logged a total of  268 hours and 47 minutes for 34 patients which is more than 8 hours of skin to skin per patient and baby. LDRP had some parents who did more than 15 hours during their hospital stay, one family logged 34 hours!

321 hours of KC  in the 3 Neonatal Areas combined!

.5 hours per patient per day eligible for KC!    (excludes those too sick)

How Does This Compare to Last Year (For St.B)?

Sunnybrook NICU in Toronto put out a challenge to promote Kangaroo Care for a two-week period to  in the NICU.  We took the challenge at St. Boniface Hospital and here are the results… 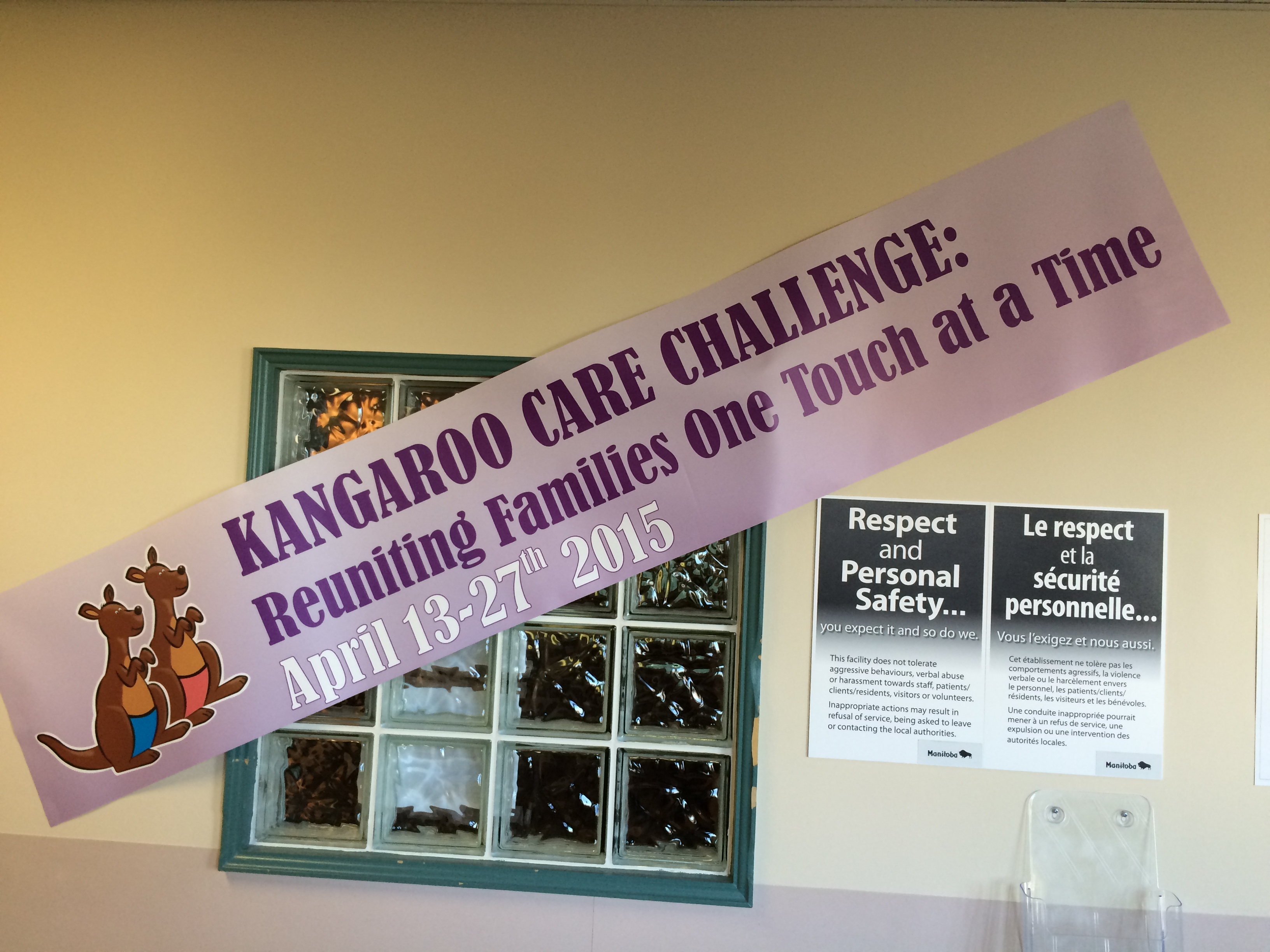 Total of 36 babies in the unit, another 14 infants that were held KC while in a C-section or being monitored by our Observation staff (these babies had TTN and were being transitioned KC in L&D and LDRP.

We had 9 long term micro premies that were in the unit at the time of the challenge, they averaged 33-69 hours during the two week period.

Not bad at all I say based on the number of babies we had!  This represents an average of 18 hours of KC per baby over that time!

You have likely heard of Kangaroo Care and you may have even seen some children receiving it in your hospital.  Why is this so important?

Kangaroo Care (KC) or Skin to Skin Care (STS) is an ideal method of involving parents in the care of their premature infant.  It fosters bonding between parents and their hospitalized infant, encourages the family to be with their child and thereby exposes them to other elements of neonatal care that they can take part in.  While we know that many units are practising Kangaroo Care there is a big difference between having KC in your unit and doing everything you can to maximize the opportunity that your families have to participate.

There is much more to KC than simply holding a baby against your chest.  For a demonstration of KC please watch the accompanying video and show it to any one in your units that may need a visual demonstration.  This excellent video is from Nationwide Children’s Hospital and walks you through all of the important steps to get it right and maximize benefit.

Before you reach the conclusion that KC only serves to enhance the parental experience it does so much more than that.  The practice began in Bogota Columbia in 1979 in order to deal with a shortage of incubators and associated rampant hospital infections.  The results of their intervention were dramatic and lead to the spread of this strategy worldwide.  The person credited with helping to spread the word and establish KC as a standard of care in many NICUs is Nils Bergman and his story and commentary can be found here http://bit.ly/1cqIXlm

The effects of KC are dramatic and effective to reduce many important morbidities and conclusively has led to a reduction in death arguably the most important outcome.  An analysis of effect has been the subject of several Cochrane Collaboration reviews with the most recent one being found here.

To summarize though, the use of KC or STS care has resulted in the following overall benefits to premature infants at discharge or 40 – 41 weeks’ postmenstrual age:

KMC was found to increase some measures of infant growth, breastfeeding, and mother-infant attachment

To put this in perspective, medicine is littered with great medications that never achieved such impact as simply putting your child against your chest.  This is another shining example of doing more with less.  This is not to say that modern medicine and technology does not have its place in the NICU but KC is simply too powerful a strategy not to use and promote routinely in the NICU.

Please join me in championing this wonderful technique and make a difference to all of our babies!

A sample of our parent letter to promote KC is found in the link below.