Can we reduce severe IVH with elevated midline head positioning for ELBWs?

Recently the practice of keeping ELBW infants with a midline head position for the first three days of life has been recommended to reduce IVH as part of a bundle in many units.  The evidence that this helps to reduce IVH has been somewhat circumstantial thus far.  Studies finding that decreased sagittal sinus blood flow, increased cerebral blood volume with increased intracranial pressure all occur after head turns would theoretically increase the risk of IVH.  Raising the head of the bed would help in theory with drainage of the venous blood from the head  and in fact systemic oxygenation has been shown to improve with such positioning.  This presumably is related to increased cardiac output from better systemic venous return.

Bringing it to the bedside

Interestingly, some of the above studies are from over thirty years ago.  We now have some evidence to look at involving this practice.  Kochan M et al published Elevated midline head positioning of extremely low birth weight infants: effects on cardiopulmonary function and the incidence of
periventricular-intraventricular. The study involved maintaining ELBW infants in an elevated midline head position (ELEV- supine, head of bed elevated 30 degrees, head kept in midline) versus standard head positioning (FLAT–flat supine, head turned 180 degrees every 4 h) during the first 4 days of life to see if this would decrease in the incidence of IVH. Ninety infants were randomized into both arms of the study.  In terms of baseline characteristics, BW of 725g in the FLAT vs 739 in ELEV were comparable as well as GA both at 25 weeks. Two differences on the maternal side existed of 40% ELEV vs 24.4% FLAT of mothers having preeclampsia and 23.3% FLAT vs 10% ELEV having prolonged rupture of membranes both of which were statistically significant.

Ultrasounds were performed at entry into the study and then daily for days 1-4 and then on day 7 with abnormal scans repeated weekly.  In terms of IVH the authors noted no overall difference in rate of IVH.  What they did find however was a statistically significant reduction in the rate of Grade IV IVH. 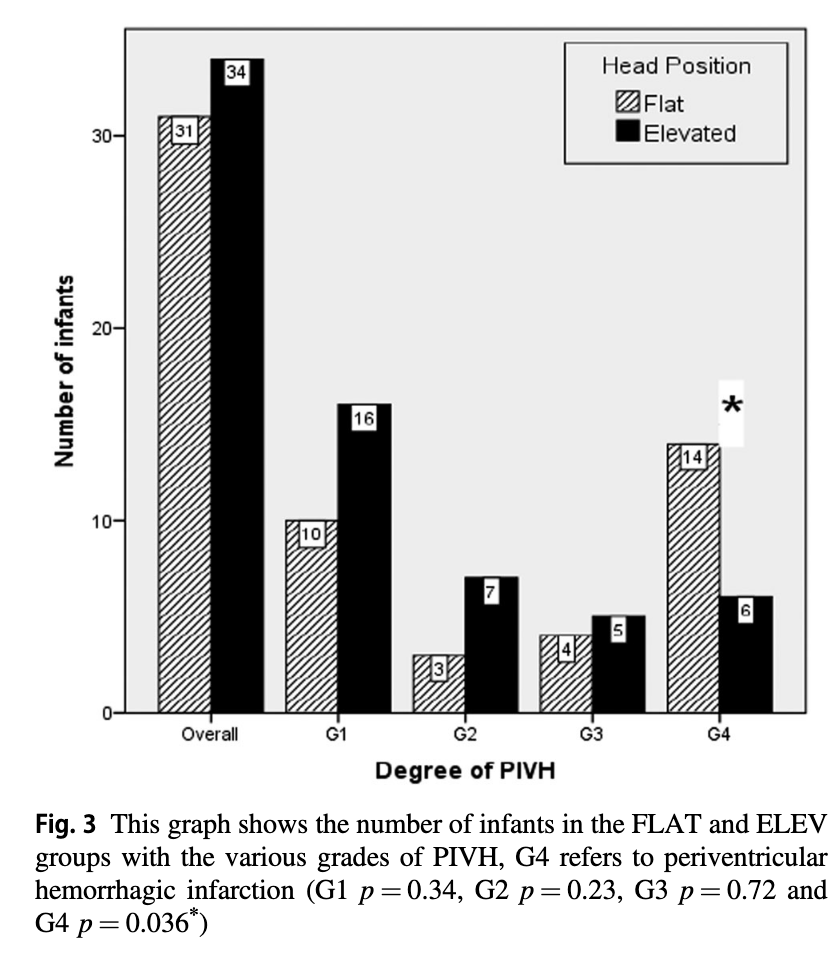 The p value for the finding of lower rates of Grade IV IVH was 0.036 so not strikingly significant but different nonetheless.  Given that the venous drainage of the head is also dependent on the resistance to flow from the pressure in the thorax one can’t infer that the intervention alone is responsible for this without ensuring that that respiratory findings are similar as well.  Similarly without knowing inflow of blood into the head as measured by blood pressure it is difficult to say that the reduction in IVH isn’t related to differences in blood pressure.

The authors helpfully looked at both of these things.  For those infants on high frequency ventilation the mean airway pressure was higher on day one being 11.5 cm H2O (FLAT) vs 9.9 cm H2O (ELEV) neither of which are high although different.  The rest of the three days were no different.  For those on conventional ventilation the only difference was on day 4 where the MAP was higher for ELEV at 8 vs 7.4 cm H2O which again is fairly mild. Interestingly, as was found in other studies that oxygenation was improved with elevation of the head, the maximum FiO2 for the two groups was different on day 1 being 46% in the FLAT vs 37.5% in the ELEV.

Looking at the hemodynamic side of things there were differences in the lowest mean BP recorded on day 1 and 3 but otherwise the groups were similar. 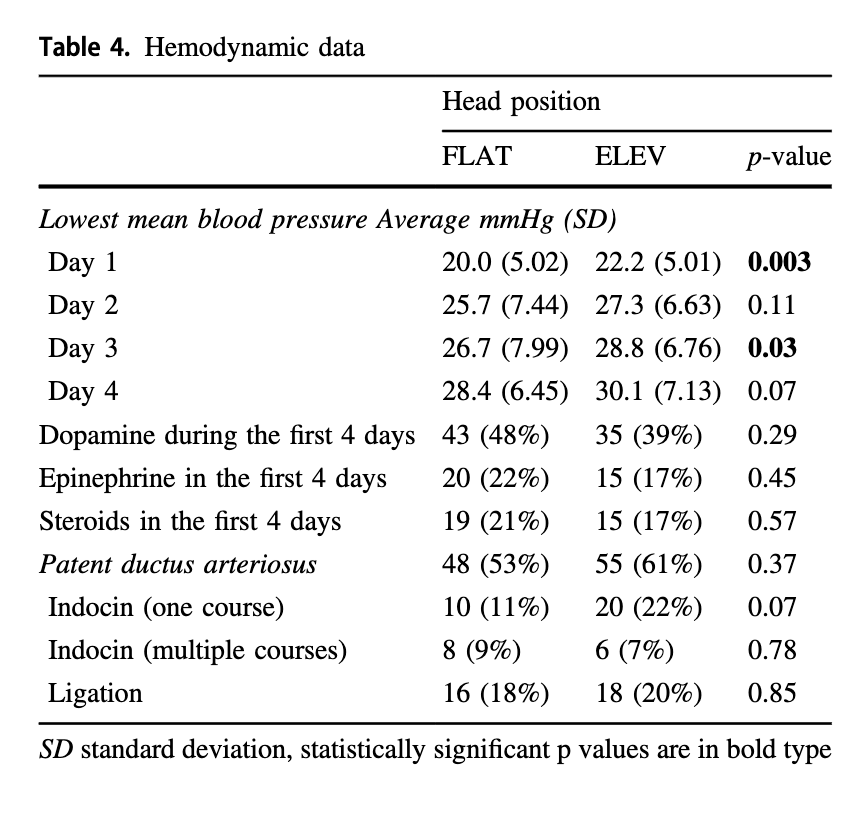 It would have been nice to see mean results during this time rather than lowest but this is what we have.

In terms of complications of preterm birth there were no differences found in rates of sepsis (important given the increase rate of prolonged rupture in the FLAT group), NEC or ROP.

What Can We Learn From This

Don’t worry.  I am not about to throw the results out.  There are a couple observations though that need to be addressed.  The first is the increased rate of preecampsia in the ELEV group.  This finding could have impacted the results.  We know that fetuses exposed to this condition are stressed and are often born with better lungs than their non-exposed counterparts.  The endogenous increase in steroids due to this stress is attributable and may explain the better oxygenation and lower mean airway pressures needed in the ELEV group rather than improvements in flow alone from positioning.  The second issue is adherence to the protocol as there were some infants in the ELEV group who were placed flat for the final 1-2 days of the study.  Having said that, this would serve to dilute the effect rather than strengthen it so perhaps it makes the results more believable.

So where does this leave us?  This study demonstrates improved survival and a reduction in Grade IV IVH without an overall reduction in IVH.  There was nothing found to suggest that the intervention is harmful.  Given the background studies demonstrating improved systemic oxygenation, reductions in ICP and cerebral blood volume the finding of reduced severe IVH seems plausible to me. This could be a practice changing study for some units who have perhaps only adopted midline positioning in the first few days of life.  It will be interesting to see if this takes off but is certainly worth a good look at.