As a Neonatologist, there is no question that I am supportive of breast milk for preterm infants.  When I first meet a family I ask the question “are you planning on breastfeeding” and know that other members of our team do the same.  Before I get into the rest of this post, I realize that while breast milk may be optimal for these infants there are mother’s who can’t or won’t for a variety of reasons produce enough breast milk for their infants.  Fortunately in Manitoba and many other places in the world breast milk banks have been developed to provide donor milk for supporting these families.  Avoidance of formula in the early days to weeks of a ELBWs life carries benefits such as a reduction in NEC which is something we all want to see.

Mother’s own milk though is known to have additional benefits compared to donor milk which requires processing and in so doing removes some important qualities.  Mother’s own milk contains more immunologic properties than donor including increased amounts of lactoferrin and contains bioactive cells.  Growth on donor human milk is also reduced compared to mothers’ own milk and lastly since donor milk is obtained from mothers producing term milk there will be properties that differ from that of mothers producing fresh breast milk in the preterm period.  I have no doubt there are many more detailed differences but for basic differences are these and form the basis for what is to come.

The Dose Response Effect of Mother’s Own Milk

Breast milk is a powerful thing.  Previous studies on the impact of mother’s own milk (MOM) have shown that with every increment of 10 mL/kg/d of average intake, the risk of such outcomes as BPD and adverse developmental outcomes are decreased. In the case of BPD the effect is considerable with a 9.5% reduction in the odds of BPD for every 10% increase in MOM dose.  With respect to developmental outcome ach 10 mL/kg/day increase in MOM was associated with a 0.35 increase in cognitive index score.

One of the best names for a study has to be the LOVE MOM study which enrolled 430 VLBW infants from 2008-2012.    The results of this study Impact of early human milk on sepsis and health-care costs in very low birth weight infants.indicated that with incremental increases of 10 mL/kg of MOM reductions in sepsis of 19% were achieved and in addition overall costs were reduced.

The same group just published another paper on this cohort looking at a different angle. NICU human milk dose and health care use after NICU discharge in very low birth weight infants.  This study is as described and again looked at the impact of every 10 mL/kg increase in MOM at two time points; the first 14 and the first 28 days of life.  Although the data for the LOVE MOM trial was collected prospectively it is important to recognize how the data for this study was procured. At the first visit after NICU discharge the caregiver was asked about hospitalizations, ED visits and specialized therapies and specialist appointments. These were all tracked at 4 and 8 months of corrected age were added to yield health care utilization in the first year, and the number of visits or provider types at 4, 8, and 20 months of corrected age provided health care utilization through 2 years.

“Each 10 mL/kg/day increase in HM in the first 14 days of life was associated with 0.26 fewer hospitalizations (p =
0.04) at 1 year and 0.21 fewer pediatric subspecialist types (p = 0.04) and 0.20 fewer specialized therapy types (p = 0.04) at 2 years.” The results at 28 days were not statistically significant.  The authors reported both unadjusted and adjusted results controlling for many factors such as gestational age, completion of appointments and maternal education to name a few which may have influenced the results.  The message therefore is that the more of MOM a VLBW is provided in the first 14 days of life, the better off they are in the first two years of life with respect to health care utilization. 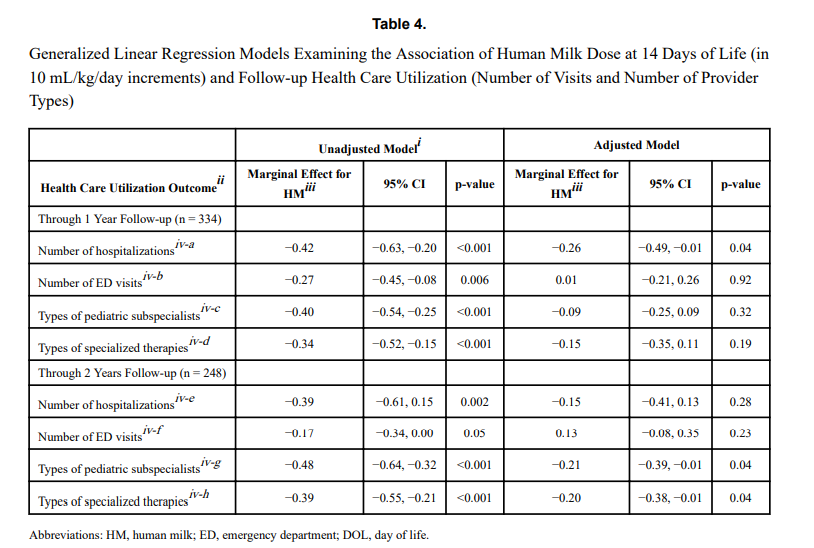 That even makes some sense to me.  The highest acuity typically for such infants is the first couple of weeks when they are dealing with RDS, PDA, higher oxygen requirements etc.  Could the protective effects of MOM have the greatest bang for your buck during this time.  By the time you reach 28 days is the effect less pronounced as you have selected out a different group of infants at that time point?

What is the weakness here though?  The biggest risk I see in a study like this is recall bias. Many VLBW infants who leave the NICU have multiple issues requiring many different care providers and services.  Some families might keep rigorous records of all appointments in a book while others might document some and not others.  The big risk here in this study is that it is possible that some parents overstated the utilization rates and others under-reported.  Not intentionally but if you have had 20 appointments in the first eight months could the number really by 18 or 22?

Another possibility is that infants receiving higher doses of MOM were healthier at the outset.  Maternal stress may decrease milk production so might mothers who had healthier infants have been able to produce more milk?  Are healthier infants in the first 14 days of life less likely to require more health care needs in the long term?

How do we use this information?

In spite of the caveats that I mentioned above there are multiple papers now showing the same thing.  With each increment of 10 mL/kg of MOM benefits will be seen.  It is not a binary effect meaning breastfed vs not.  Rather much like the medications we use to treat a myriad of conditions there appears to be a dose response.  It is not enough to ask the question “Are you intending to breastfeed?”.  Rather it is incumbent on all of us to ask the follow-up question when a mother says yes; “How can we help you increase your production?” if that is what the family wants>