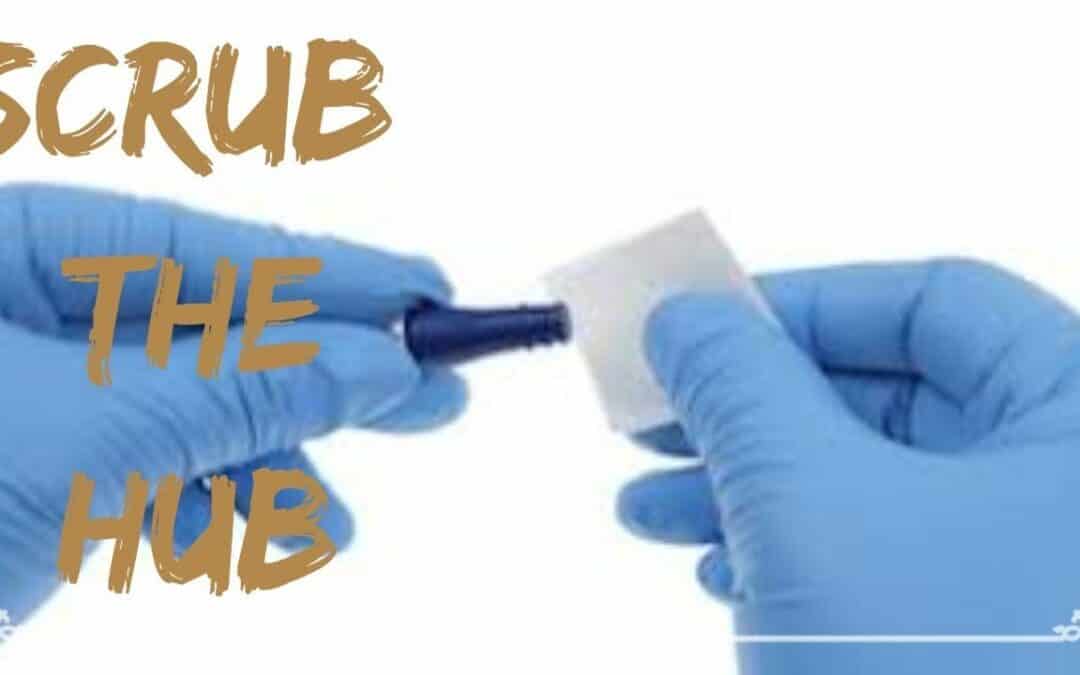 I had the pleasure of meeting the author of a paper I am about to comment on this week while at the 99 NICU conference in Stockholm.  Dr. Ohlin from Orebro University in Sweden presented very interesting work on their unit’s “scrub the hub” campaign. As he pointed out, many places attempt to reduce coagulase negative staphylococcal infections by introducing central line bundles but seldom is there one thing that is changed in a bundle that allows for a before and after comparison like his team was able to do.  I was so impressed by this work and at the same time concerned about another strategy to reduce infection that I felt compelled to make a comment here.

Dr. Ohlin and the first author Dr. Bjorkman published Scrubbing the hub of intravenous catheters with an alcohol wipe for 15 sec reduced neonatal sepsis back in 2015.  They compared a 16.5 month period in their unit when they rolled out a CLABI reduction bundle to a period of 8.5 months afterwards when they made one change.  Nurses as is done in the units I work in were commonly scrubbing the hub before they injected the line with a medication but in the second epoch the standard changed to be a specified 15 second scrub instead of being left up to the individual nurse.  With permission from Dr. Ohlin here is a picture of the hubs highlighting bacterial growth without scrubbing, then for a duration less than 15 seconds and then with 15 seconds.

In the first epoch they had 9 confirmed CLABSIs and 0 confirmed in the second after their intervention.  The rate of CLABSI then in the first epoch was 1.5% vs 0% in the second group.  As with any study looking at sepsis, definitions are important and while they didn’t do paired cultures to rule out contamination (one positive and one negative as is the definition in our hospitals) they did refer each patient to a senior Neonatologist to help determine whether each case should be considered a true positive or not.  Given that they made no changes to practice or other definitions in diagnosing infections during that time perhaps the results were indeed real.  Presumably if they had missed an infection and not treated it in the second epoch the patient would have declared themselves so I think it is reasonable to say that 8.5 months without a CLABSI after their intervention is a success.  As Dr. Ohlin points out the scrub duration may also help due to the abrasion of the hub surface removing a bacterial film.  Regardless of the reason, perhaps a 15 second scrub is a good idea for all?

The lazy person’s solution – the SwabCap

One way to get around human nature or people being distracted might be to cover each luer lock with a cap containing 70% isopropyl alcohol.  In this way when you go to access the line there should be no bacteria or labour required to scrub anything since the entry of the line is bathed in alcohol already.  This was the subject of a systematic review from the Netherlands entitled Antiseptic barrier cap effective in reducing central line-associated bloodstream infections: A systematic review and meta-analysis.  The reviews ultimately examined 9 articles that met their inclusion criteria and found the following; use of the antiseptic barrier cap was effective in reducing CLABSIs (IRR = 0.59, 95% CI = 0.45–0.77, P < 0.001). Moreover, they concluded that this was an intervention worth adding to central-line maintenance bundles. Having said that, the studies were mostly adult and therefore the question of whether minute quantities of isopropyl alcohol might be injected with medications was not a concern when they made their conclusion.

What about using such caps in ELBW infants

Sauron et al in St. Justine Hospital in Montreal chose to look at these caps more carefully after they were implemented in their NICU.  The reason for taking a look at them was due to several luer valves malfunctioning.  The authors created an in-vitro model to answer this question by creating a closed system in which they could put a cap on the end of a line with a luer lock and then inject a flush, followed by a simulated medication (saline) and then a flush and collect the injected materials in a glass vial that was sealed to prevent evaporative loss of any isopropyl alcohol.  They further estimated the safe amount of isopropyl alcohol from Pediatric studies would be 1% of the critical threshold of this alcohol and using a 500g infant’s volume of distribution came up with a threshold of 14 mmol/L.  The study then compared using the SwabCap over two different valve leur lock systems they had in their units (SmartSite and CARESITE valves) vs. using the strategy of “scrub the hub”.

The results were quite concerning and are shown below.

Certainly, the Smart Site valve allowed considerable amounts of isopropyl alcohol to enter the line but the CARESITE while better still allowed entry compared to the control arm which allowed none.  Beyond the introduction of the alcohol into the system in all cases considerable clouding of the valves occurred with repeated capping of the system with new caps as was done with each med injection since each was single use.  In lines that were not accessed contact with the cap was left for 96 hours as per recommendations from the manufacturer and these changes occurred as well.

While a reduction in CLABSI is something we all need to strive to obtain, it is better to take the more difficult path and “scrub the hub” and by that for 15 seconds which incidentally is the same recommended duration for hand hygiene in both of our units.  Perhaps in larger term infant’s seepage of isopropyl alcohol into the lines would not be as concerning as their larger volume of distribution would lead to lower levels but I would ask the question “should any isopropyl alcohol be injected into any baby?”.  I think not and perhaps by reading this post you will ask the same thing if your unit is using these caps.