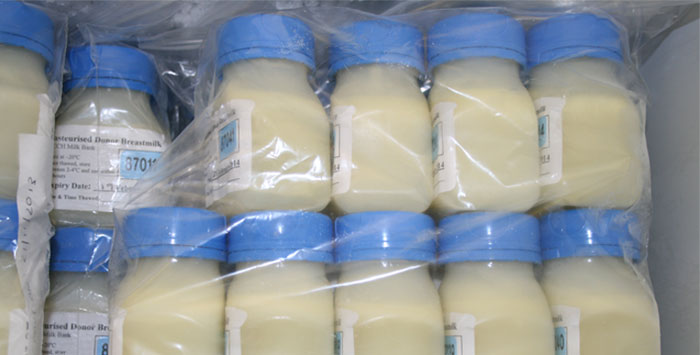 The rise of donor milk banks and depots in recent years has been a welcome addition to the care of preterm infants.  We have known for many years that “breast is best” and advocate for mother’s own milk whenever possible.  When this is not possible we previously turned to formula but with the availability of pooled pasteurized donor milk many hospitals have focused on expanding the indications for use.  Through personal communications in Canada we are a bit all over the map in terms of indications with some centres restricting use based on birth weight while others taking into account, gestational age as the main criteria.  With respect to duration some centres use 2 weeks, others 4 and then others until a gestational age is reached which may mean up to 10 weeks of use for a baby born in that centre at 24 weeks.  While variation exists it is hard to find anyone who would suggest this is a bad thing to provide.

The main reason for pushing expansion of programs is the strong evidence that avoidance of bovine milk is associated with a reduction in the risk of NEC.  Many studies have been done in this regard and the Cochrane systematic review concluded that formula increased the risk of necrotising enterocolitis: typical risk ratio 2.77 (95% CI 1.40 to 5.46); risk difference 0.04 (95% CI 0.02 to 0.07).

While donor milk is a wonderful nutritional product for sure it does have one issue which is a lower protein content than mother’s own milk and as such dieticians will commonly increase the protein content from 0.9 g/dL to 1.2 g/dL by adding powder or more recently liquid protein supplements.  One might expect then that doing so would provide a reduction is NEC, and an optimal source of nutrition for the growing preterm brain.  Avoidance of NEC should reduce the risk of adverse neurodevelopmental outcome as the two have been linked before.

This Ontario, Canada based study utilized four NICUs to provide in a randomized fashion either donor human milk or formula with matching protein and caloric densities to 363 infants (181 donor milk, 182 formula).  All infants were preferentially fed mother’s own milk but supplemented with donor or formula if unavailable and planned to use one or the other for up to 90 days or discharge whichever came first.  The exposure to donor milk was quite long in comparison to our own units practice (1 month duration if born at < 1500g) .  The median number of days for donor milk was 65 (IQR, 41-90).  A significant risk to the results would be if there was a difference in amounts of mother’s own milk provided between the two groups but there was none. Exclusive feeding of mother’s own milk occurred in the Donor milk group (28.2%) and formula group (26.9%) respectively. Among infants requiring a supplement, there was no statistically significant difference between the donor milk and formula groups in the proportion of total enteral feeds for each infant consumed as mother’s milk (58.4% [IQR, 13.6%-96.0%] vs 63.3% [IQR, 9.6%-97.2%], respectively, P = .96).

Curiously (at least to me) I would have expected differences in some of the morbidities other than NEC but such was not the case. 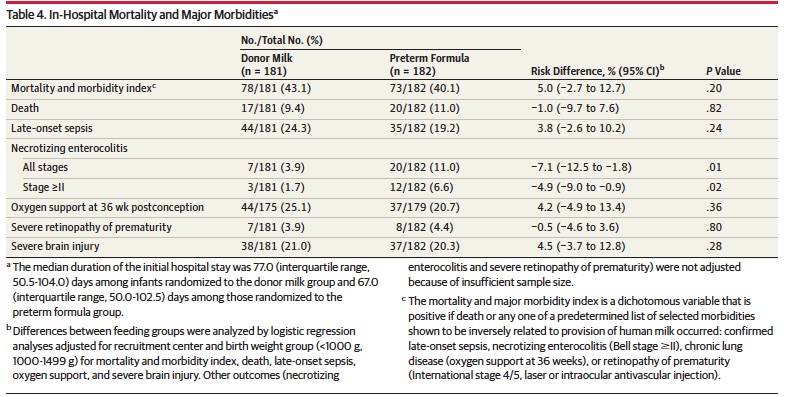 The strength of using human milk though can not be understated as any reduction in NEC is an extremely important outcome regardless of whether long term neurodevelopment is affected positively or not.
in terms of the latter outcome no difference was observed between the two groups.  The Bayley III findings were quite similar at 18 months which on the surface may cause everyone’s shoulders to sag as the benefit everyone hoped for did not transpire.  Additionally, linear growth, head circumference and weight gain were not different between groups.  This may simply reflect that protein and caloric intakes were indeed matched between groups whereas in the past, the lack of protein fortification led to delays in growth in the donor milk groups.

At the risk of sounding like the end of a Cochrane review I am not sure this is the final word on donor milk and outcome.  Larger studies may be needed to get at the real truth.  This was not a pure sample of donor milk vs formula as a significant percentage (over 20% in both groups) received purely mother’s own milk.  Furthermore, in those that received supplements there was still a significant percentage that received some of mother’s own milk.  The authors suggest that a larger sample size would unlikely have detected a difference and that may be the case but is it so due to where the study was done.  What if the study were done in a centre with a very low rate of breastfeeding?  I am concerned that the lack of response in outcome may reflect a dilution of the impact of the strategy by having such a successful rate of providing mother’s own milk.

All Is Not Lost

Using a glass is half full view, I think it is worth pointing out that this study should also provide some comfort for those centres that use formula as a supplement.  Clearly the higher rate of NEC is not comforting to anyone but for those who survive to discharge the neurodevelopmental outcome is promising.  Formula in some circles has taken on a view as almost a toxic substance but I often remind residents and fellows that while we prefer breast milk, formula has been used in NICUs for decades and not every patient who receives it will develop NEC.  Yes it is a risk factor for NEC and when you don’t have an alternative it is an acceptable form of nutrition to use.  What I think may be lost in the DOMINO study is that if you are a centre that uses formula as there is no access to DBM this should help provide reassurance to the families you care for.  All is not lost after the DOMINO study.  Every cloud has a silver lining and fear not this will not be the last study to test this hypothesis.  At the moment it is just the best we have and this is not the last we will hear on this topic.