Does High Flow Really Have A Place in the NICU At All? 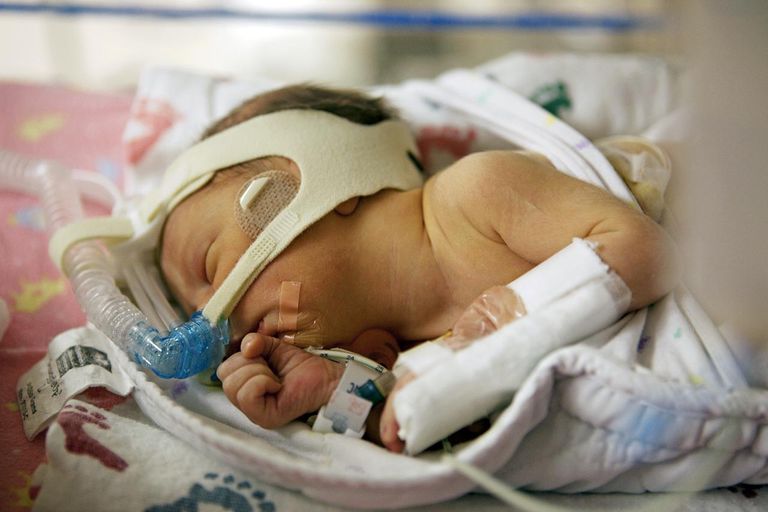 This may sound familiar as I wrote about this topic in the last year but the previous post was restricted to infants who were under 1000g.  High Flow Nasal Cannula be careful out there had a main message that suggested the combined outcome of BPD or death was more prevalent when HFNC is used alone or with CPAP than when CPAP is used alone.  The question remains though whether this applies to larger infants.  Without looking at the evidence for that combined outcome most people would say there is unlikely to be a difference.  Larger more mature babies have a much lower risk of BPD or death so proponents of HFNC would say it is simpler to use and helps prevent nasal breakdown as well.  The question remains as to whether all outcomes are the same in larger infants and that is the point of this post.

First off it is important to understand what this type of trial is.  The first requirement is that the two treatments have both been compared to a placebo and found to be both effective.  Once you establish that you have a choice between two treatment options then you eliminate the placebo and compare them head to head.  What you are looking for in this type of trial is to determine not whether one is better than the other but that there is no difference in a clinical outcome of interest.  If you find no difference then the next step is to look at other outcomes that might be of interest and see if there are any benefits to picking one versus the other.  In the case of CPAP vs HNFC, if a non-inferiority trial showed no difference in an important outcome such as length of stay but nasal breakdown was less with HFNC it might lead a unit to use HFNC for their infants.  Okay, now that we have that cleared up we can move on to an actual study examining this very subject.

This was an interesting study with a great name (The HIPSTER trial) that enrolled infants > 28 weeks and 0 days with none of the infants receiving surfactant but either being randomized to HFNC or CPAP after delivery.  These infants were your typical modern day cohort of babies who may avoid intubation and surfactant by establishing FRC early with positive pressure applied to the nose through one of these devices.  The end point for the study was treatment failure within 72 hours.  If an infant failed in the HFNC they could have a trial of CPAP whereas in the CPAP group they were intubated.  For each infant in the HFNC group flow was set from 6-8 l/min and for CPAP 6-8 cmH2O.

Treatment was considered to have failed if an infant receiving maximal support (high-flow therapy at a gas flow of 8 liters per minute or CPAP at a pressure of 8 cm of water) met one or more of the following criteria:

The trial randomized 583 infants (278 HFNC, 286 CPAP) but was halted by the data and safety monitoring committee after an analysis of the first 515 revealed that the outcome was worse in the HFNC group (25.5% failure rate vs 13.3 for CPAP).  Interestingly treatment failures were more common in babies below and above 32 weeks so it was not just the smallest infants who failed. 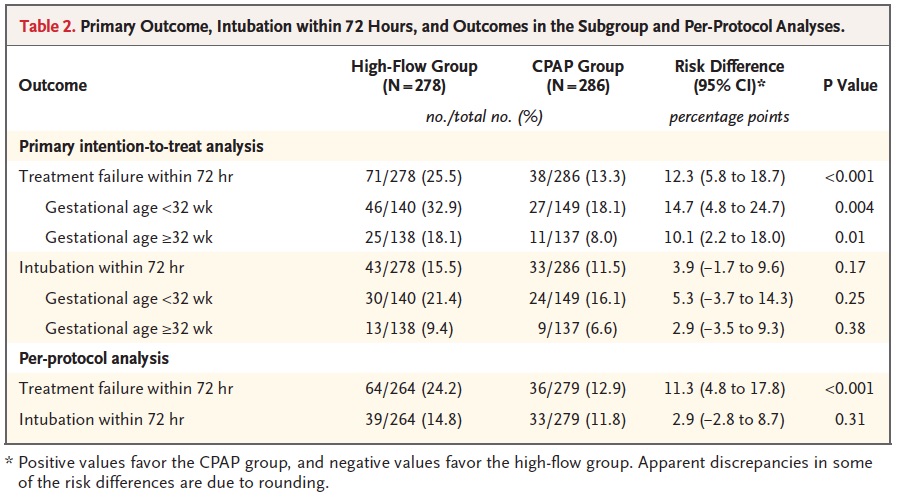 Another interesting finding was that the most common reason for treatment failure was criteria 1 (FiO2 > 40%) while intubation was higher for all infants but did not reach statistical significance.  Curiously what did reach a significant difference was criteria #4 (18.4% urgent intubations in the CPAP group vs 5.6% in the HFNC group). You might be tempted to therefore ponder which is worse, a little O2 or being intubated but you need to recall the trial design which was set up to provide this kind of result.  If you failed HFNC you were placed on CPAP whereas if you failed CPAP you were intubated.  In the HFNC group, 78 infants were deemed to have failed but 28 of them were in fact “rescued by CPAP”.  It therefore isn’t a fair comparison when it comes to urgent intubation since if you failed CPAP there wasn’t another option.

Not a total loss

Nasal trauma was indeed much lower in the HFNC group, occurring only 8.3% vs 18.5% of the time with CPAP.  Pneumothorax was also found to be significantly different with none of the patients in the HFNC group having that complication vs 2.1% in the CPAP group.  What this study tells us is that as a primary modality to treat newborns with RDS who have not received surfactant it is preferable to use CPAP in the first 72 hours.  Some of you may say it might not say that at all but consider the impact of having more babies exposed to high FiO2.  We know from other studies that high FiO2 can be quite damaging to preterm infants and this study was certainly not powered to look at all those important outcomes such as ROP, PVL and BPD.  The authors report them and found no difference but without adequate power to show a difference I wouldn’t take much comfort in those findings.

I think were things may settle out though is what to do in more mature infants.  There is no question that for those on chronic respiratory support there is some risk of nasal breakdown.  Although I don’t have much experience with HFNC I would think that for the older patient who either already has BPD at 36 weeks or is close to that point but reliant on +4 or +5 CPAP that HFNC might help “give them a break”.  As such I don’t see this as a total loss but rather an option to try when CPAP for whatever reason is not tolerated.

As a primary therapy for non-invasive management RDS I will keep my CPAP for all babies thank you.