Getting it right. Diagnosing true infections in the NICU. It matters!

The scenario is often the same.  Faced with a child born to a mother with risk factors for sepsis you decide to start antibiotics.  The time comes closer to 36 – 48 hours when you must decide whether or not to continue.  Each time we examine our results and look at cultures and try to do what is right.  Yet defining right is sometimes hard for so many.  If we had 100% sensitivity and specificity for all our tests it would be easy but we don’t.  So what can we do?

If I had to have one wish though it would be that we could improve upon our diagnostic accuracy when it comes to treating suspected infections in the newborn.  As health care providers we have an extremely loud inner voice trying to tell us to minimize risk when it comes to missing a true bacterial infection.  On the other hand so much evidence has come forth in the last few years demonstrating that prolonging antibiotics beyond 48 hours is not just unwise in the absence of true infection but can be dangerous.  Increased rates of necrotizing enterocolitis is just one such example but other concerns due to interfering with the newborn microbiome have arisen in more recent years.  What follows are some general thoughts on septic workups that may help you (and myself in my own practice) as we move ahead into the New Year and may we cause less harm if we consider these.

The Role of Paired Blood Cultures

Although not published by our centre yet, we adopted this strategy for late onset sepsis a couple years back and have seen a significant reduction in work-ups deemed as true infections since adoption.  While the temptation to do only one blood culture is strong as we have a desire to minimize skin breaks consider how many more there will be if you do one culture and get a CONS organism back.  There will be several IV starts, perhaps a central line, repeat cultures etc.  If you had done two at the start and one was positive and the other negative you could avoid the whole mess as it was a contaminant from the start.  On my list of do no harms I think this may have the greatest benefit.

The Chest X-Ray Can Be Your Friend

While I am not a fan of routine chest x-rays I do believe that if you are prepared to diagnose an opacification on a chest x-ray as being due to a pneumonia (VAP or in those non-ventilated) that you need to follow this up with a repeat x-ray 24 – 48 hours later. 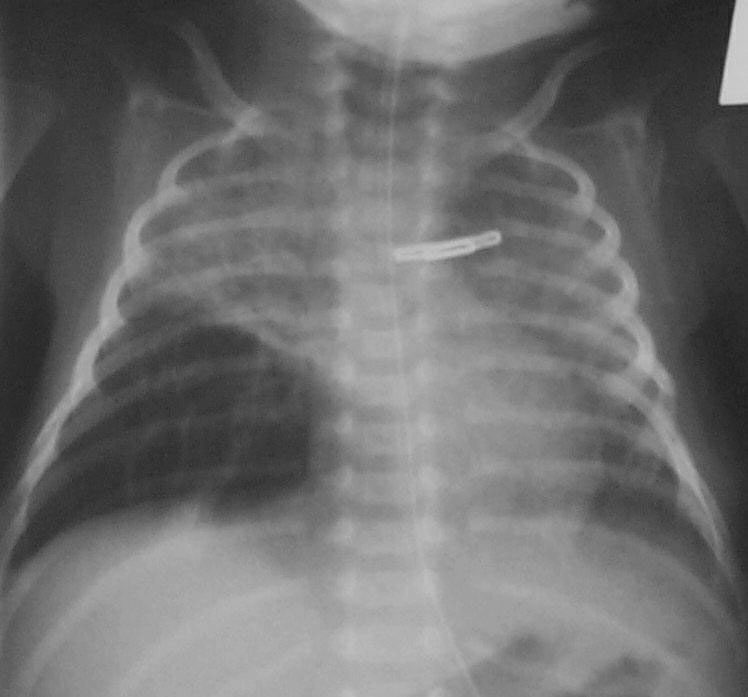 If the opacity is gone it was atelectasis as a true pneumonia will not clear that easily. Well worth the radiation exposure I say.

We hear often in rounds the morning after a septic work-up that the baby was too sick to have an LP and that we can just check the CSF if the blood is positive.  There are two significant problems to this approach.  The first which is a significant concern is that in a recent study of patients with GBS meningitis, 20% of those who had GBS in the CSF had a negative blood culture.  Think about that one clearly… relying on a positive culture to decide to continue antibiotics may lead to partially treated GBS meningitis when you discontinue the antibiotics prematurely.  Not a good thing.  The second issue is that infants with true meningitis can have relatively low CSF WBC counts and may drift lower with treatment. Garges et al in a review of 95 neonates with true meninigits found that CSF WBC counts >21 cells per mm3 had a sensitivity of 79% and specificity at 81%.   This means that in those with true meningitis 19% of the time the WBC counts would be below 21 leading to the false impression that the CSF was “fine”.  If antibiotics were effective it could well be by 48 hours that the negative CSF culture you find would incorrectly lead you to stop antibiotics.  Message:  Do the CSF sampling at the time of the septic work-up whenever possible.

If We Aren’t Prepared To Do a Supra Pubic Aspirate Should We Not Collect Urine At All?

This provocative question was asked by a colleague last week and is based on the results of a study which was the topic of the following post: Bladder Catherterizations for UTI: Causing more harm than good?  The gist of it is that it would appear that in many cases the results of a catheter obtained urine cannot be trusted.  If that is the case then are we ultimately treating infections that don’t actually exist when the only positive culture is from a urine.  I believe using point of care ultrasound to obtain specimens from a SPA will be the way to go but in the meantime how do we address the question of whether a UTI is present or not?  May need to rely on markers of inflammation such as a CRP or procalcitonin but that is not 100% sensitive or specific either but may be the best we have at the moment to determine how to interpret such situations.

So much of what I said above is important when determining if an infection is present or not. The importance of preventing infection cannot be understated. Audits of hand hygiene practice more often than not demonstrate that physicians are a group with some of the lowest rates of compliance. Why is that? As a physician I think it has nothing to do with ignorance about how to properly perform the procedure but rather a tendency to rush from patient to patient in order to get all the things done that one needs to do well on service or call. If we all just slow down a little we may eventually have less need to run from patient to patient as the rate of infections may drop and with it demand for our time.

If slowing down is something that you too think is a good idea you may want to have a look at the book In Praise of Slowness by Carl Honore (TED Talk by Carl Below)  which may offer some guidance how to do something that is more easily said than done. Here is hoping for a little slower pace in the new year. We could reap some fairly large benefits!