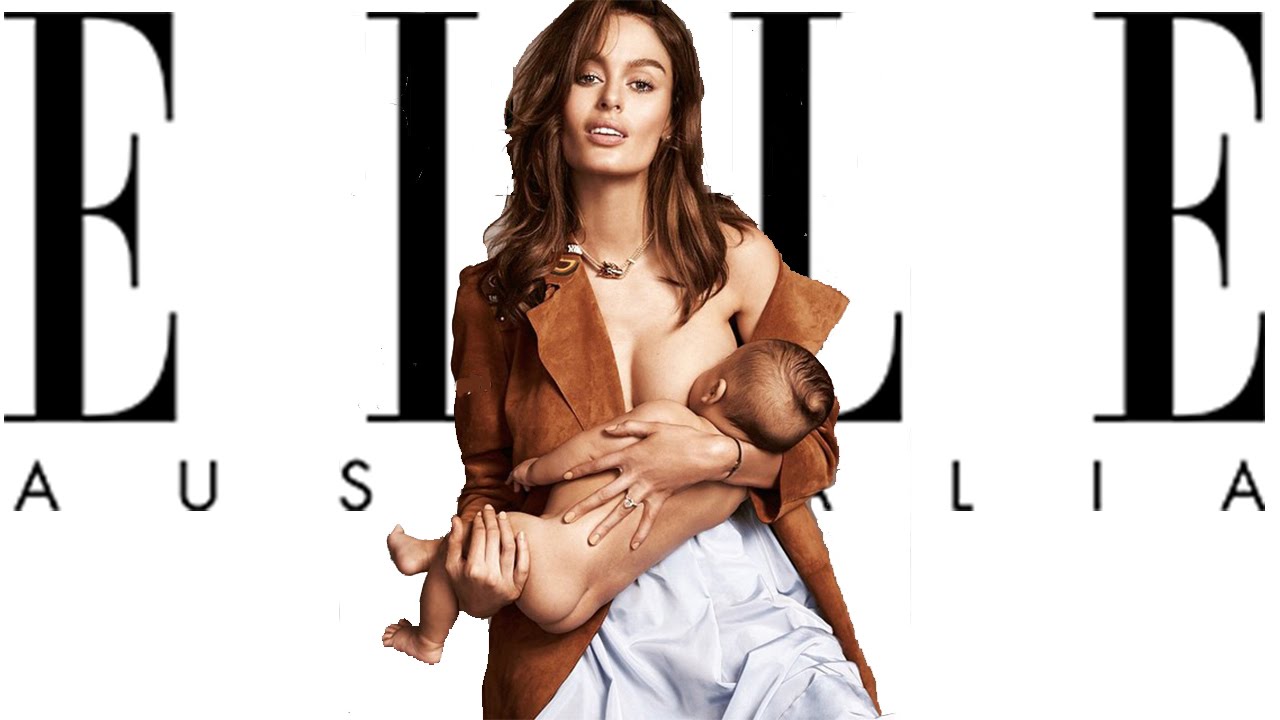 Nineteen seventy two was notable for many things aside from the year of my birth.  Canada defeated the Soviets in the summer series, the Watergate scandal took down a Presidency, The GodFather was released and for the purposes of this post breastfeeding rates in the US reached an all time low of 22%.  For an excellent review of the history of breastfeeding the article by AL Wright is excellent. 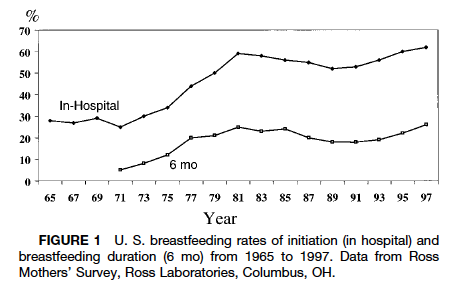 Rates of breastfeeding began a steady decline in the 1960s as more and more women entered the workforce and seemingly had to choose between employment and breastfeeding.  This was a time when it was not seen as being acceptable to breastfeed in public (although that is not the case in many places still to this day) and the workplace was not as conducive to supporting women as in current times (think onsite daycares).  Add to this that the 1970s also saw a backlash of sorts in the appeal of breastfeeding due to science “perfecting” a better source of nutrition in formula and we had the low rates that we did.  In fact through discussions with parents from that generation, mother’s who chose to breastfeed may have been viewed by some as being silly for not using something like formula that could let the whole family in on the experience.  Mom, Dad, kids and grandparents could all take part in the wonderful act of feeding.  Why be so selfish?

Following this period as research began to demonstrate improved outcomes with breastfeeding including reductions in atopic disease, less hospital admissions and more recently positive impacts on intelligence and your microbiome the trend reversed. In fact, as the above graph demonstrates, rates approximating 70% were reached by the late 1990s.  Since that time the CDC has shown that initiation rates have continued to rise and currently are at the highest documented levels in history. 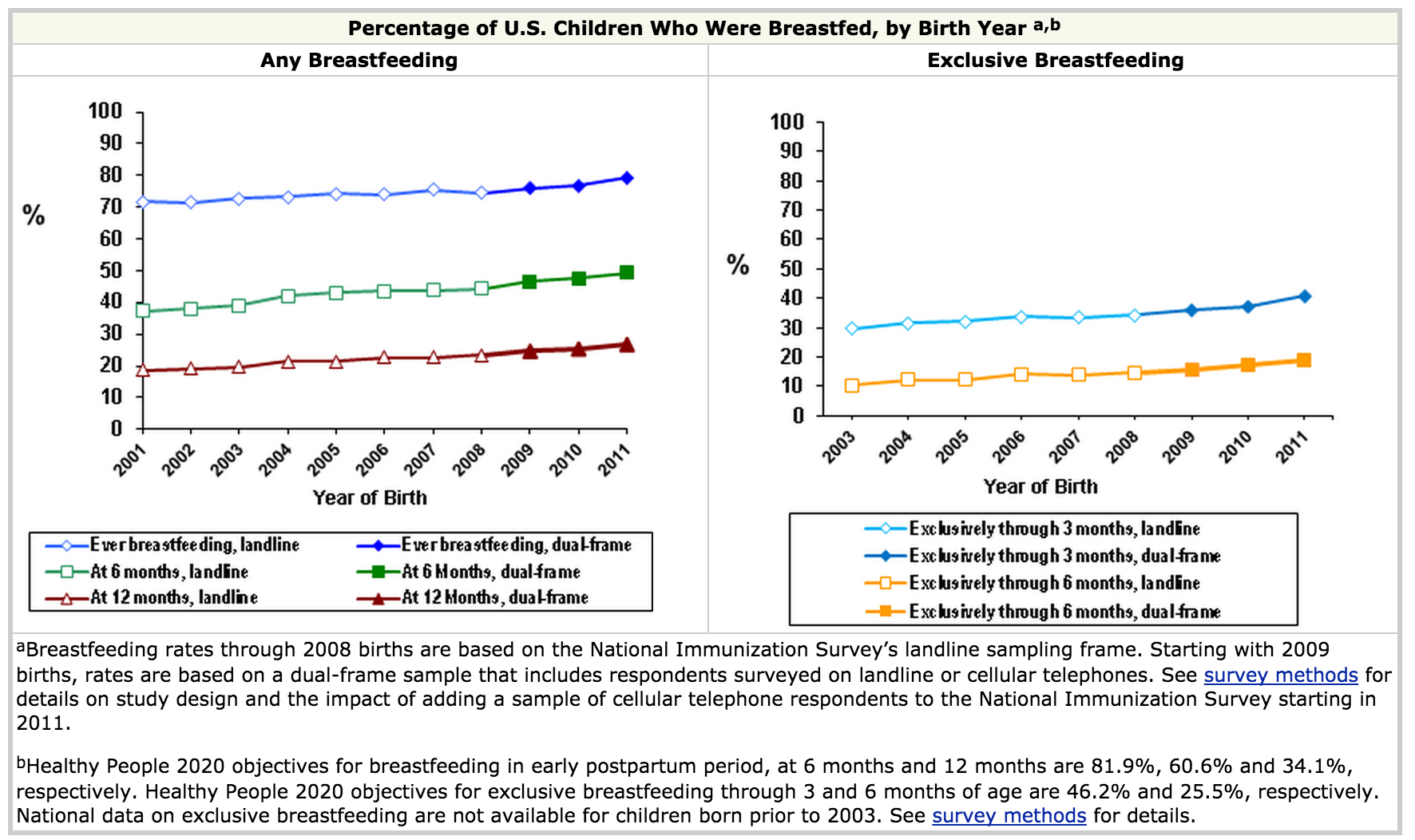 Looking at the CDC data though reveals some very important information.  While the rates of any breastfeeding reach 80%, the rates at 6 months hover around 50%.   This means that a significant portion of US women are using some formula when they come home and from the graph on the right about 35% by three months are exclusively breastfeeding. This number is far short of the goal the WHO has set to encourage exclusive breastfeeding for the first 6 months however it is a remarkable achievement for infant health.

A recent trend on social media and print media has been the Brelfie.  As you may know, this involves taking a picture of yourself breastfeeding your baby and posting it in one forum or another.  This has been popularized by many celebrities and made it’s way onto the cover of Elle magazine this month. 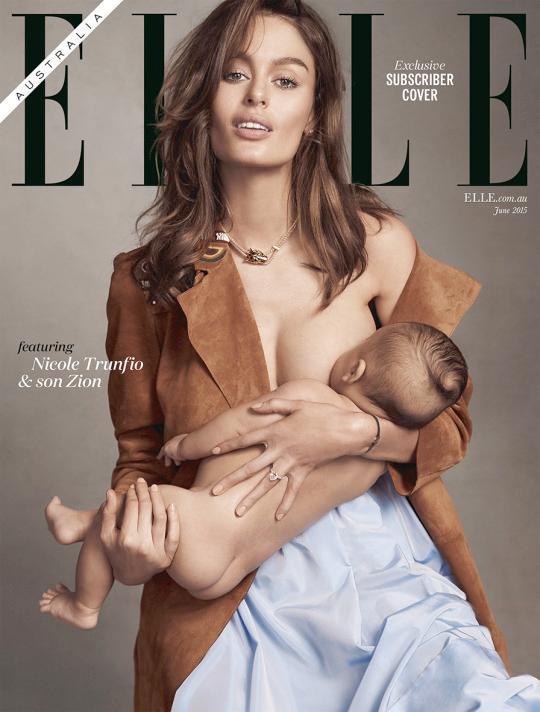 Curiously, though all of this attention and promotion of breastfeeding has created a culture that is now being called bressure.  This is defined as pressure to breastfeed and was the subject of a recent survey by Channel Mum in the UK.  The highlights of the survey that went out to  2,075 mums showed:

– one in 20 being attacked on social media

–  15 per cent of mums have even lied to cover up their bottle-feeding and appear to be ‘better’ mums.

This so called bressure has led to a public campaign to increase awareness of the harassment that some mothers feel which involves taking selfies with cards having one word describing what breastfeeding meant for them.  A video from Channel Mum can be seen here

While I am all for breastfeeding, I find it peculiar that the experience that breastfeeding mothers (all 22% of them) had in 1972 is now being felt by a larger percentage in 2015 who are bottle feeding.  It is unfortunate that assumptions are being made of many of these women who put a bottle in the mouths of their infants.  How many times does one conclude that the mother simply chose not to breastfeed because they were worried about the way their breasts would be affected cosmetically or that they simply chose to go back to work and breastfeeding would just get in the way.  I suspect in most cases the truth is much different.  Many of these mothers have tried to breastfeed but couldn’t produce enough.  Others may have suffered from cracked nipples, mastitis, abscesses or due to prior surgery were unable to produce milk.  Many such mothers have agonized over their “failure” to do something that they hear “everyone can do”.  While they are told it takes some work for many that is a huge understatement.  Is it not bad enough that these women have suffered the feeling of failure?  To be looked at or spoken to in a disapproving way does nothing to support them.  Add to this that by 3 months of age at least in the US 65% of mothers are providing some formula and it seems silly to take the “high and mighty” approach in the first couple of months and assume the worst of these women. Many of the “breastfeeders” will soon enough join the ranks of those using some formula.

Maybe the better option is to try and help.  Many of the above problems whether it be producing enough quantity or pain related to breastfeeding can be addressed through tips on technique.  While I am not an expert in this, hospitals would do well to increase staffing of on site lactation consultants to help mothers who wish to breastfeed get off on the right foot so to speak.  A larger working force of midwives in North America in particular could certainly provide help in this regard.  What I can say is that if a woman suffers a bad experience with breastfeeding in their first pregnancy the likelihood they will try again the next time is lower especially if we as a society make them feel like a failure.

Yes we need to promote breastfeeding and we should do what we can to follow the WHO recommendations and minimize the use of formula when possible.  While bressure may have been intended to yield something good we need to be sensitive.  Perhaps a better strategy next time a friend says they are going to use formula is to ask if they are having trouble with breastfeeding and if they need some help. Not having the discussion will ensure that nothing changes and a chance to do something will be lost due to misdirected bressure.