Are we overdosing preemies on caffeine? 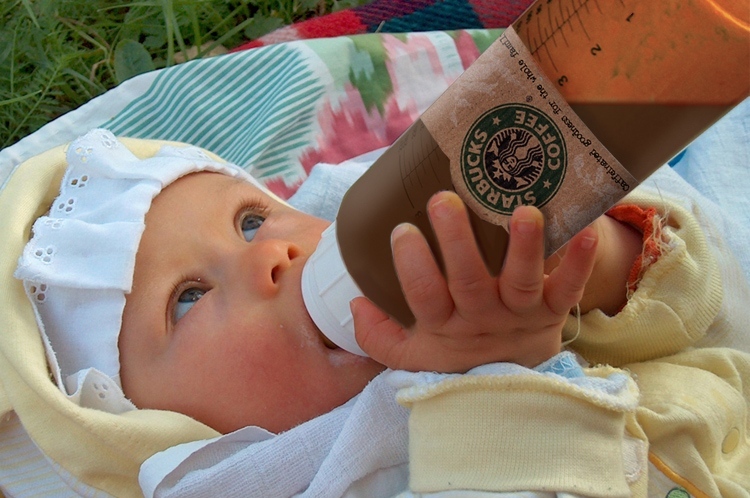 For those of you who know me and my practice as a Neonatologist you may find the title of this piece odd.  I have and will likely continue to be an advocate for the use of caffeine in premature infants. I recommend it both very early in the caseroom for those under 32 weeks to help stave off intubation and often continue caffeine until late in an infants’ stay in the NICU.  Truth be told I also send children home on caffeine on occasion when all other markers needed for discharge have been met but they continue to have episodes of apnea and bradycardia that are not resolving and prolonging their stay in hospital.

In recent years I have noticed a creep of practice to begin pushing doses of caffeine base beyond the 5 mg/kg level that has been generally accepted as the upper limit of the 2.5 to 5 mg/kg range that most use in practice. The standard dosing was justified based on the CAP study by Schmidt et al indicating that it was effective in reducing the risk of bronchopulmonary dysplasia and success at earlier extubation.  While there appeared to be an initial benefit to neurodevelopment favouring caffeine treatment by school age the difference disappeared. This creep effect to using higher daily maintenance dosing of 7 or 8 mg/kg/d has occurred likely for some good reasons not the least of which is a dose effect in which clinicians could see a reduction in clinical events for some patients as they increased the dose.  We are no different as doctors than others in that success tends to shape our practice.  Now before you accuse us of being mavericks, we did have some evidence to support the use of higher dosing beyond the 5 mg/kg dosing that had been recommended.  Published in 2004, Steer and colleagues studied the effect of using a loading dose of 80 mg/kg caffeine citrate (take 50% reduction to get the base formulation we normally use) followed by 20 mg/kg maintenance dosing vs 20 mg/kg loads and 5 mg/kg maintenance in a cohort of infants < 30 weeks gestation who were having a planned extubation.  The full article may be found here.  The results of the study demonstrated greater success in extubation and less apnea in the group treated with the higher doses as shown here. 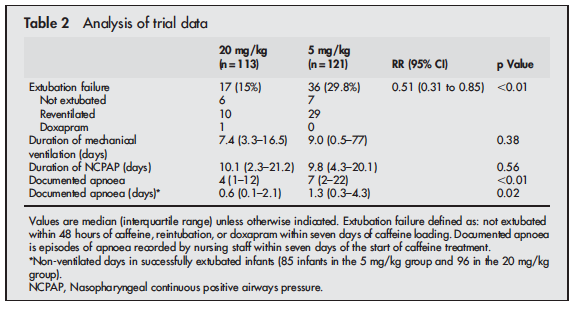 The results of this study certainly made some waves in the Neonatal community as can be seen by the “creep” in practice over the last number of years to increase the caffeine dose in our units to 6, 7 and sometimes 8 mg/kg of caffeine base in an effort to essentially titrate to effect especially in infants who are on CPAP.  The motivation to prevent a reintubation secondary to apnea has been so compelling that the theoretical concerns over lack of long-term outcome data on high dose caffeine treatment have been largely ignored.

At this point it is important to also recognize that the way in which we use caffeine in terms of initiation of treatment has also changed.  Many units have adopted the “Golden Hour” approach to neonatal resuscitation and are driven to use non-invasive means of support after encouraging results from several trials such as the Support, Boost and the more recent Canadian NIPPV trial.  While not demonstrating improvements in outcomes necessarily, the fact that BPD rates are mostly unchanged means that with the use of early caffeine in the delivery room and the use of CPAP one can avoid invasive ventilation in many infants.  As such, there has been a departure from the practice as described by Steer and colleagues to using caffeine to facilitate extubation to trying to prevent it in the first place.

In discussions with some of my colleagues we have expressed some reservation over the use of the higher doses of caffeine beyond 5 mg/kg and with the publication of a study this week by McPherson et al, these concerns may be quite warranted.  For the complete study click here.  This study of 74 preterm infants randomized them in the first 24 hours of life to either 80 mg/kg or 20 mg/kg caffeine citrate loads and then in both groups they followed these loads with 10 mg/kg per day maintenance.  The primary outcome of the study was white matter structural development by MRI.  Previous research by Doyle had found an improvement in this outcome with the use of standard caffeine therapy of 10 mg/kg/d so the real question here was “If a little is good, then is more better?”

Sadly the answer to the last question is a resounding NO!

None of the respiratory outcomes were any different between the standard caffeine and high dose groups but the following came out as a worrisome outcome: 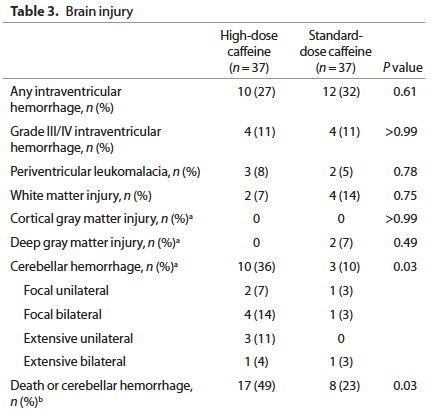 Furthermore when the infants were followed up at 2 years of age a statistically significant percentage of 2 year olds previously randomized to the high dose caffeine regimen were found to be hypertonic (2.3 vs. 1.5%).  Overall neurodevelopment was no different between groups but it should be pointed out that the study was not powered to detect such differences.

One question that must come up with these findings is whether or not it is plausible that a 2 day exposure to high dose caffeine followed by standard dosing for the remainder of the time could lead to cerebellar hemorrhage.  I think the answer is yes given the findings from a single dose of 25 mg/kg caffeine (equivalent to 50 mg of caffeine citrate/kg as studied by Hoecker et al

As noted by the authors, this single dose was responsible for reducing cerebral blood flow velocity by about 20% from baseline.  The regimen over 48 hours in the above study was to give 80 mg/kg in divided doses as a load so it is reasonable to conclude these infants would have experienced a reduction in cerebral blood flow as well, and possibly to a greater degree than the patients in the Hoecker study.  Add to this that these are infants under 30 weeks of age who have a fragile arterial and venous network to begin with and it seems reasonable that a period of hypoperfusion possibly combined with hypoxemia and then reperfusion injury could account for these cerebellar bleeds.

So where does this leave us?  As the authors conclude it is not wise to plan a larger study looking at the same strategy given the findings in this pilot.  What remains unclear at least to me is whether 6, 7 or 8 mg/kg during the maintenance phase of treatment offers any true long-term advantage.  With anything there are tradeoffs though and finding the right balance is never easy.  If we use lower caffeine doses and in some patients they require intubation, is the increased risk of CLD and possible neurodevelopmental impairment from that worth the limitation of risk?  After the first week of life is the risk of cerebellar hemorrhage lower as the blood vessels mature?  I think so which would make the argument for using higher doses at that point but in truth we just don’t know about safety in terms of long-term outcomes. For now at least it would seem that in the absence of guidance from research all we can really say is that 2.5 to 5 mg/kg/d of caffeine base is safe but that doses higher than that need to be used with caution.  It may be wise to seek informed consent for the use of higher doses in light of these findings but it is up to each unit to decide if this is justified based on your views of the data.  What do you think?